Bravotv.com: Nadine, do you think watching delivery videos on YouTube before your own delivery helped alleviate your anxieties or increase them? Did you have any of these fears before being pregnant?

Nadine Jolie Courtney: So, let me get this straight: you’re telling me I’m supposed to push something the size of a watermelon out of something the size of a lemon? How is that a good idea?! I was always scared of delivery, because I’m very squeamish about needles. Ever since I was a kid, I’ve been that person who faints when having blood drawn. (I’ve since learned it’s called a Vasovagal response and it’s an actual thing, I swear.) When it was younger, it was theoretical fear, but after I became pregnant, I realized I needed to face the beast. So I started reading books and watching videos to prepare myself.

My favorite videos were from the YouTube channel 'What’s Up Moms?', which does hilarious motherhood parodies and "here’s what you can really expect" videos. While going down the video rabbit hole, I came across one called 'In Loving Memory Of Connie' and realized that Connie -- one of the moms I’d spent hours watching -- had died of childbirth complications. It was devastating. People always say, "Stop worrying, your body is designed to go through childbirth!" but before modern medicine, women died in childbirth all the time. Learning that somebody who felt like a friend had died, even in our modern, medically-advanced society, put a whole new fear into my brain.

Suddenly, I couldn’t stop watching delivery videos, hoping that seeing a triumphant ending would erase my fear. Yes, every video I watched made me dissolve in a flood of tears -- and I probably looked like a lunatic to Erik, crying on the couch non-stop -- but they weren’t just scared tears. I experienced a lot of happy tears, too. Delivery still seemed terrifying, but each time the doctor pulled out the baby and set it on the mother’s chest, it overwhelmed me with wonderful emotion. I couldn’t believe how beautiful and miraculous the entire thing was, and was SO excited to experience it for myself. I was just praying that it all went well, didn’t result in trauma to the baby, and didn’t lead to a C-section.

Preview
Nadine is Not Excited for Childbirth, She's Terrified 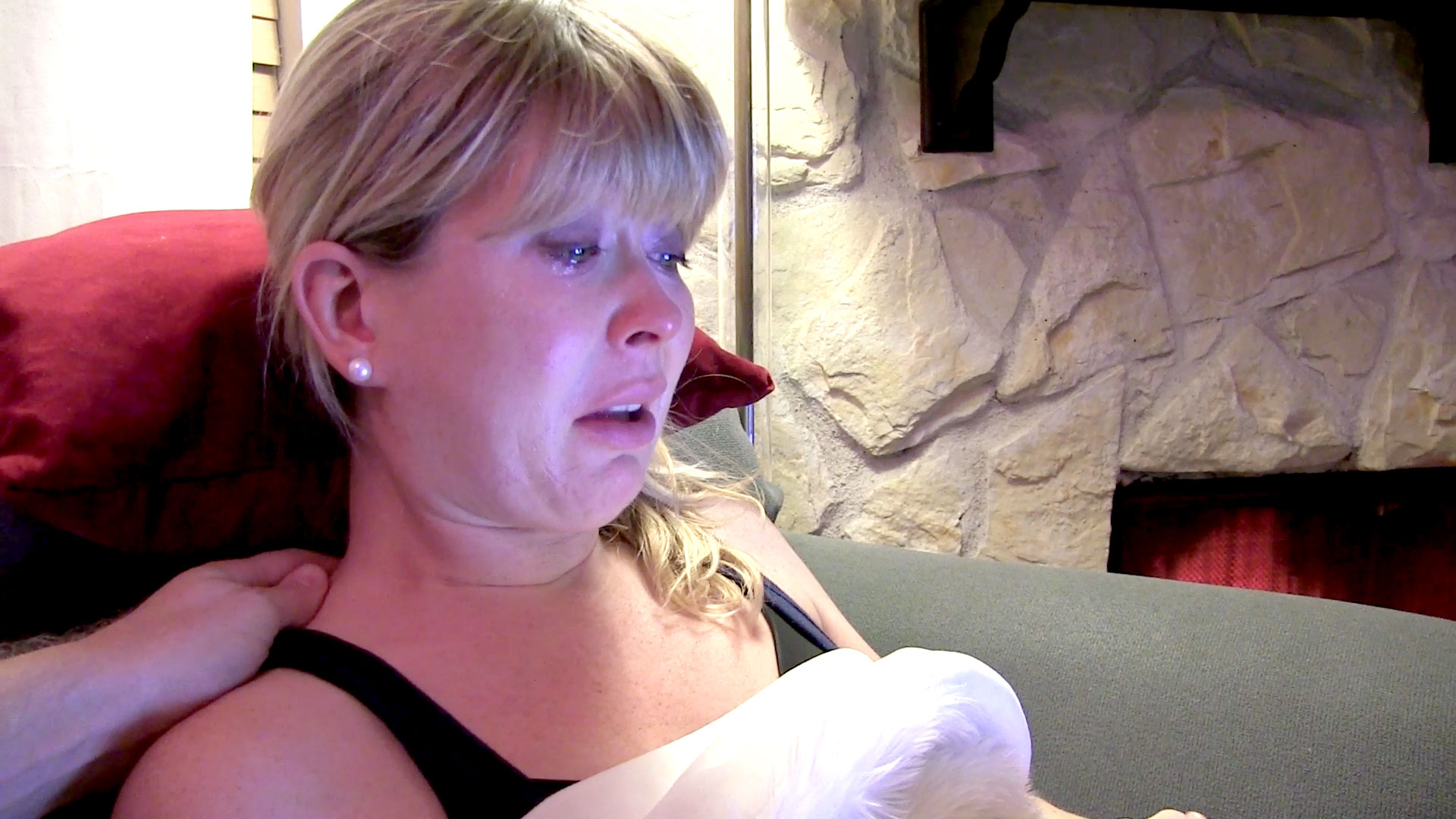 Bravotv.com: Erik, what was the hardest part of watching Nadine's struggle towards the end of her pregnancy?

Erik Courtney: I felt so helpless and sad watching Nadine crying over the birth videos. She believes in researching to prepare yourself for the worst, but I think it’s better to avoid the unpleasant and only deal with it when you need to. Dr. Amersi and I wanted her to stop watching the videos because we felt like she was riling herself up. And she kept worrying about a C-section, which I thought wasn’t helping. If a C-section happened, we’d deal with it together, and of course I’d support her and the baby as much as I could after the birth.

Bravotv.com: Can you both tell us about the anxiety Nadine was feeling in the childbirth class. Erik, what were you thinking when Nadine was having such severe anxiety -- would you switch places if you could?

NJC: I absolutely loved our childbirth nurse: Liz Baker-Wade from Birth and Beyond. She’s equal parts warmth and honesty, and made me feel very comfortable about what I could actually expect. But, of course, since I’m me, I started to get hot and woozy during class when she was talking about C-sections! Surgery doesn’t seem like the end of the world, but the idea of being awake for a major abdominal surgery...eek. No, thanks.

EC: I would never switch places with her! Not even for a day! Pregnancy looked incredibly uncomfortable and if YouTube was any indicator, labor seems like one of the most painful experiences, period.

Nadine viewed the anxiety as a way to prepare herself for childbirth, but she’d had a tremendous amount of anxiety about pregnancy, too, and her pregnancy wasn’t that bad. In the end, it seems like anxiety doesn’t accomplish a lot except make you suffer, when the thing you’re anxious about is out of your control.

I was terrified...All I could think was: I hope our little girl is going to be okay.

Bravotv.com: Can you both describe how you felt the moment you found out there was a blood clot that could potentially harm the baby and going into the hospital when that baby’s movement decreased?

NJC: I believe in jinxing things and I didn’t want to take our healthy pregnancy for granted. When Dr. Amersi told us that there was a blood clot, even though she reassured us that it would likely be fine, I started to worry. And when I tracked the fetal movements and Aurelia wasn’t moving a couple of days later, I panicked. I was praying to God, my mother, and everybody I could that Aurelia was getting enough oxygen inside me and was healthy and nourished.

EC: I was terrified. The idea that our baby girl might not get as much oxygen as she needs or that suddenly she could stop moving was such a scary thing. It seemed like at least two or three times a day, Nadine would ask me to feel her stomach to make sure I felt something. When I couldn’t, all I could think was: I hope our little girl is going to be okay.

Bravotv.com:  How did you land on the beautiful name Aurelia?

We both thought it was such a pretty, fresh name! It’s unique, but everybody’s heard it at least once because of the movie Love, Actually. It’s an ancient Roman name meaning Golden (Julius Caesar’s mother was named Aurelia!) and while it’s rare here in America, it’s actually very common in Europe. We're excited to introduce her to the Bravo family, and can't wait to share lots of cute baby pictures on Nadine's blog and on our Nadine and Erik Instagram accounts!

All Posts About
Erik Courtney
Nadine Jolie Courtney
You May Also Like...
Recommended by Zergnet
Latest Posts

8 Most Shocking Moments From Newlyweds Season 3

Where Are They Now? Newlyweds The First Year Season 3

Which Newlyweds Couple Had the Toughest First Year?

Newlyweds Season 3: Where Are They Now?

Extended Scene: Rob and Ro Find out They're Pregnant!

Are #Newlyweds Adonis and Erica Calling it Quits?

How Tara Conquered Her Fear of Flying: Alcohol

Find Out What "Sugaring" is With Craig Ramsay and Brandon Liberati