Sign Up for Free to View
Does Cameran's Husband Jason Want to Clone Their Neighbors' Dog?! 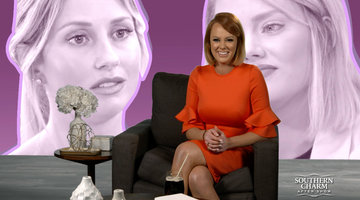 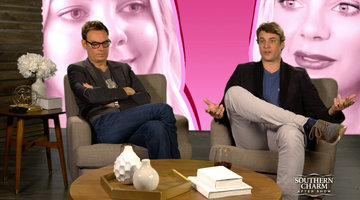 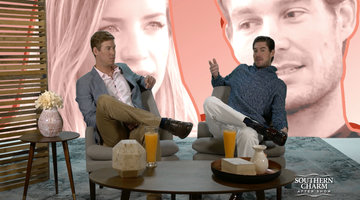 Southern Charm fans have never seen Cameran Eubanks' husband, Jason Wimberly, on the show — and they, unfortunately, probably never will. Cameran has long said that her hubby of four years just doesn't have any desire to be on TV.

But social media is a bit of a different story. Though Cameran told The Daily Dish earlier this season that Jason "has no interest in social media" and that "he doesn't even understand what Instagram is," he does pop up on her Instagram feed from time to time, whether it's posing with his wife and their 7-month-old daughter Palmer or cuddling with the other love of his life: the neighbor's dog, Elvis (more on their otherworldly connection, above).

Well Patricia went and put Elvis on pajamas and a pillow. You too can do this for your pet (or the neighbors) @patricias_couture. #IveSeenItAllNow #WholeNewLevel #EatYourHeartOutBurtReynolds

Although Jason still likes to stay out of the spotlight, Cameran said "he's fine" with being featured on her social media every so often. In fact, Cameran has even found it helpful to post photos of her significant other now and again. "I think because he's not on the show, it's almost like people don't think he exists," Cameran explained to The Daily Dish. "So I at least try to incorporate some pictures of him on social media so people do believe that I am married, I do have a husband, I am happy. It's not just this front for the TV show."

Cameran Eubanks Spills Some Secrets About Her Mystery Husband

Just because Jason stays off of Southern Charm doesn't mean he doesn't like the show, as Cameran previously explained to The Daily Dish (clip below). "You would be surprised to know how much he loves Southern Charm. People think because he won't be on TV, he doesn't approve or doesn't like the show. It's the total opposite. He is the one who encourages me to do it every season," she shared. "He's actually really close friends with everybody on the cast. He just doesn't want to be on camera, which I don't blame him. I get it. Not everybody's built for reality television."

Find out more surprising facts about the Southern Charm husband, below.

Everything You Need to Know About Cameran Eubanks' Husband Jason Wimberly

Life is better as an Insider
Bravo Insider is your VIP pass to never-before-seen content, exclusive giveaways, and so much more!
Sign Up for Free
All Posts About
Cameran Eubanks
Southern Charm
Exclusive
Relationships
Related

Cameran Eubanks: Why My Husband Isn't on 'Southern Charm'