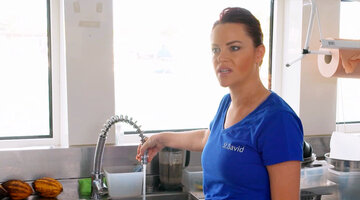 7:30
Preview
There's a Lot of Tension on the Below Deck Yacht 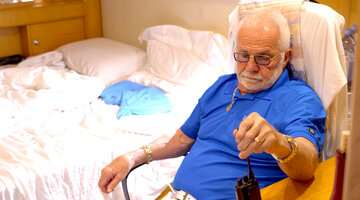 Now Playing
1:13
Preview
The Below Deck Crew Is Worried About Captain Lee Rosbach

Below Deck’s Captain Lee Rosbach made a surprise appearance on the December 7 episode of The Kelly Clarkson Show for the sweetest reason: to share a few words of encouragement for actress Christina Applegate, who was recently diagnosed with multiple sclerosis (MS).

A self-described “uber weirdo fan” of “every single” Below Deck franchise, Applegate was immediately elated to see Captain Lee’s face show up on her screen as he thanked her for being such a dedicated follower of the series.

“I want to encourage you to stay strong and remember that a good sailor never learned a damn thing in calm seas,” he said. “So I know you’re going to navigate these waters just fine.”

And should she ever want to “set sail” with him and the Below Deck crew? “You just let me know,” Captain Lee said. “We have a deck chair with your name written all over it.”

He concluded his inspiring message with another offer, adding, “If you’d like to DM me sometime and just chat, I’m here. Take care, kiddo.”

Andy Cohen expressed a similar sentiment after The Kelly Clarkson Show shared a clip of the exchange on Instagram. He commented on the post, calling Captain Lee “the sweetest man,” while Below Deck Sailing Yacht’s Daisy Kelliher also reacted by praising Applegate and the various shows she has appeared on, including Dead to Me and Married… with Children. “Omg I love this!!!!” Daisy added. “We love you Christina.”

Life is better as an Insider
Bravo Insider is your VIP pass to never-before-seen content, exclusive giveaways, and so much more!
Sign Up for Free
All Posts About
Lee Rosbach
Below Deck
Kelly Clarkson
Related