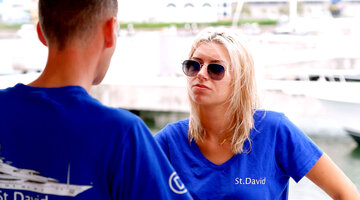 Now Playing
1:10
Preview
Fraser Olender Says Camille Lamb "Has an Excuse for Everything"

Though Fraser Olender wasn’t new to Below Deck when he joined the crew of St. David, Season 10 marked the first time he was working as a chief stew on the show.

As the leader of the interior team, which consisted of stews Hayley De Sola Pinto and Alissa Humber and deck/stew (turned just stew) Camille Lamb, Fraser had to manage expectations, schedules, and personalities.

To further complicate matters for the Brit, Camille and Alissa butted heads from the very beginning of the charter season — and they got into an argument in front of the guests on the January 9 episode.

The matter was settled when Camille was fired at the end of the following episode, but does Fraser wish he had become more involved before that had to happen?

The chief stew appeared on the January 16 episode of Watch What Happens Live with Andy Cohen, and he acknowledged that Captain Sandy Yawn was “right” to tell him to get his team in line.

“I think all of these things are a learning curve, and I needed her to sort of kick me up the booty and tell me that I need to stop being such a nice guy and get the job done,” Fraser explained.

When host Andy Cohen asked if Fraser “regret[ted] not addressing Alissa and Camille’s issues with each other sooner,” the chief stew admitted that his focus was elsewhere at the time.

“I had a lot going on, and I didn’t see their issues — their childish behavior of not getting along — worth it when I had a job to fulfill,” Fraser explained.

Fraser also reflected on Camille’s eventual firing and shared whether he thinks Captain Sandy got involved “too much” in the crew drama during the charter season. Find out what he had to say about the crew members by pressing play on the video above.

Life is better as an Insider
Bravo Insider is your VIP pass to never-before-seen content, exclusive giveaways, and so much more!
Sign Up for Free
All Posts About
Alissa Humber
Andy Cohen
Camille Lamb
Fraser Olender
Below Deck
Related