Andy Cohen on the Kelly Ripa-Michael Strahan Breakup: "It Seems like a Premature End"

The breakup will be televised, and Andy Cohen will definitely be tuning in. Kelly Ripa is slated to return to LIVE with Kelly and Michael on April 26, a week after co-host Michael Strahan announced his exit from the show and she took a break from filming. And the Watch What Happens Live host can't wait to see what will happen when the twosome reunite on-screen, following all the off-screen drama. "I cant wait to see what she says," Andy shared on his Sirius XM talk show, before opening up a bit about the latest developments with the show, which is anchored by his BFF, Kelly.

"I've been getting so many questions about what's going on with my friend, Kelly Ripa, and how she's doing and what do you think? And, you know, I want to say that she — I know she spent the weekend celebrating her 20th anniversary with Mark [Consuelos], which has been a long planned vacation," he said. "You know when I look at this whole situation, it's worth noting the two of them, Kelly and Michael, they had such great chemistry. It seems like a premature end to a great relationship and I think so much has been written about this situation and how it was handled. I've been a TV executive or producer for 25 years, so I'm always fascinated to see how TV things go down. I can't say this went down in the greatest way. There was a piece in Variety by [Maureen] Ryan that I thought was excellent. If you want to know kind of what's been going on in my mind, I would say read that piece."

What perplexes Andy the most about Michael's decision to leave his position at the long-running morning show (which he joined in 2012) to head to Good Morning America on a full-time basis this fall, was the fact that the former football star had top-billing on the show.

"The thing that no one is talking about is to me the job of co-hosting LIVE is the greatest job in TV, and [Kelly's] so good at it, and [Michael] was really good at it. And it's a job that you take and you take it for life. She's been at that job for 15 years. You keep that job, you don't go anywhere. So I can't get over that he left LIVE... your name's in the freaking title. You can spend your life here. He can spend 15 years there and make serious bank and still do GMA twice or week or do Pyramid or whatever else he's doing. He left and went to GMA, he's now one of five people sitting at the crowded anchor desk. It's like 18 co-anchors... What happens if [at] GMA there's not a pickup [in ratings], then what's gonna happen to sweet man? Cause by then she'll have a new co host."

Kelly will return to LIVE on Tuesday, a decision she shared with staffers in an email obtained by Deadline. “I wanted to thank you all for giving me the time to process this new information,” she wrote late Friday. “Your kindness, support, and love has overwhelmed me. We are a family and I look forward to seeing you all on Tuesday morning."

We guess we know what we'll be doing tomorrow morning.

Watch Kelly show off her Housewives impersonations in a throwback WWHL moment, below. 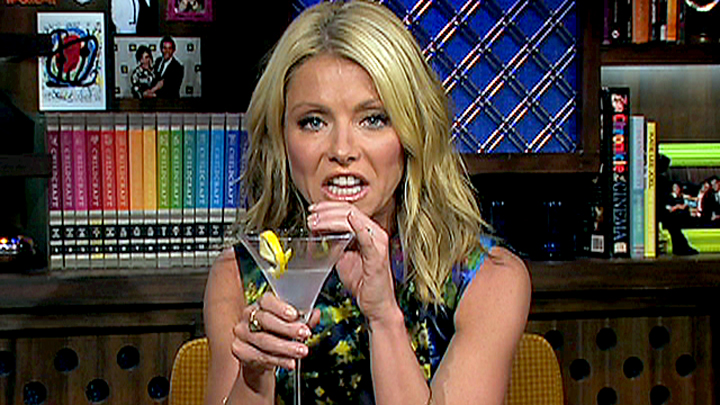 Andy Thinks AC is the Perfect Replacement for Strahan

Which Bravolebs Can Pull Off Kelly Ripa’s Pink Hair?