She's one of the world's biggest (and busiest) pop stars—but Lady Gaga still has time to watch the Housewives franchise. So when she sat down with Andy Cohen on tonight's epic episode of Watch What Happens Live, our host obviously asked her to name her fave stars.

"I really like Karent [Sierra, of Real Housewives of Miami] because everyone hates her because she's gorgeous," she says, before Andy informs her that she's no longer on the show. (In fact, Lady Gaga once live-tweeted an episode of RHOM and offered up a hilarious piece of advice to Lisa Hochstein.) 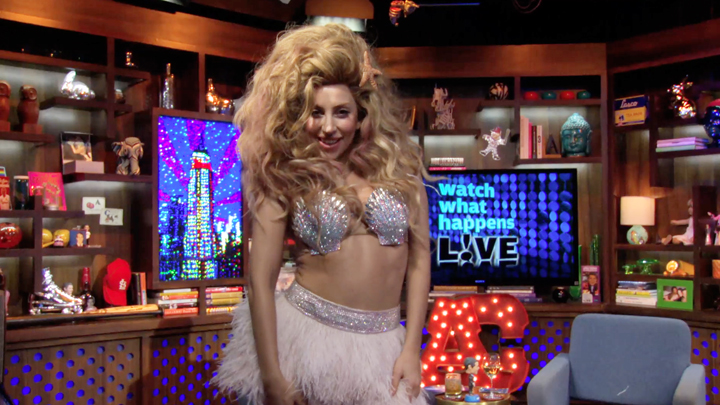 "I also love Nene [Leakes]," she says, "And Lisa Vanderpump, mostly because she doesn't give any f---s."

Andy quickly changed the subject to get to important matters: if Lady Gaga was on the Housewives, what would her tagline be? Gaga quickly rises from her seat to reveal it.

"They may say I'm a woman...but underneath I'm all man," she says, before cackling in laughter and giving Andy high-fives.