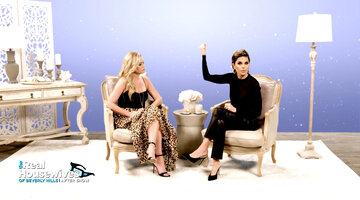 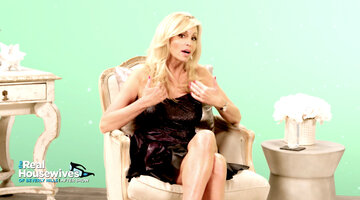 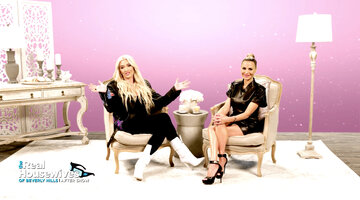 Lisa Rinna and Kim Richards hadn't really spent any time together since The Real Housewives of Beverly Hills Season 7 reunion, when Kim returned the stuffed bunny Lisa had given her as a gift for her new grandson because she didn't feel it had "good energy" — until they came face to face at Kyle Richards' daughter Farrah Aldjufrie's "Farrahween" birthday party.

"I hadn't seen Kim really for two years," Lisa said on The Real Housewives of Beverly Hills After Show. "I knew sooner or later I'd run into her somewhere but I didn't quite expect it to be here."

Kim Richards Has a Gift for Lisa Rinna

So why did she choose that particular party to confront Kim? Well, it all has to do with her Halloween costume. Lisa was dressed up as her diva pal Erika Jayne, after all.

"I knew she was there but I didn't care and then it was once they wanted us to do a group cast photo, that's when my Erika Jayne really kicked in and I was like, 'F--k, no; I'm not taking a picture with you,' so I stood off to the side. I wouldn't take a picture with anybody... I can tell you exactly what I said. I said, 'Kim, when you gave Rinna back that bunny, it was really c--ty,'" Lisa recalled.

And she didn't lose her Erika Jayne-esque nerve after dropping the big "C" word. "Once I said it, I had such a rush of adrenaline; it was such a great f--king feeling, I gotta tell. I said it and I walked on," Lisa said.

Kyle also explained her perspective on the altercation between her friend and sister on the After Show — check out her take on the events, as well as her killer Rinna impression, in the video at the top. And tune into to RHOBH every Tuesday at 9/8c. Preview, below.

Next on RHOBH: Brandi Glanville Is Back!
Life is better as an Insider
Bravo Insider is your VIP pass to never-before-seen content, exclusive giveaways, and so much more!
Sign Up for Free
All Posts About
Erika Jayne
Kim Richards
Kyle Richards
Lisa Rinna
The Real Housewives of Beverly Hills
RHOBH After Show
Related

The RHOBH Bunny Just Got Even More Scandalous

Kyle Richards on the Aftermath of Bunnygate