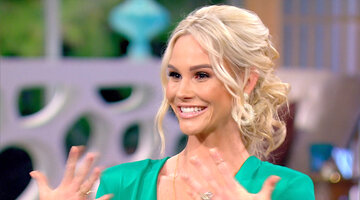 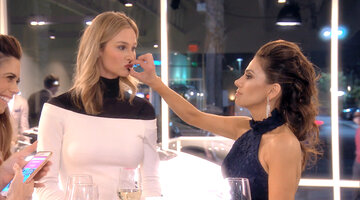 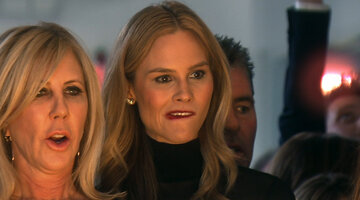 0:48
The Real Housewives of Orange County
Is Meghan Jealous of Peggy?

One of The Real Housewives of Orange County is bidding the OC a fond farewell.

Meghan King Edmonds confirmed that she will be stepping away from RHOC in a post published on her blog Tuesday, January 23. "Today is a bittersweet day for me. After three seasons of the rollercoaster that is The Real Housewives of Orange County I’ve decided to hang up my OC Housewife hat," she wrote.

Meghan went on to say that she "arrived at this multi-faceted decision after much thought, and then I thought some more." She explained that being on RHOC not only "takes a massive emotional toll" due to dealing with the drama among the ladies, but it also took a "physical toll" on her as she underwent IVF treatments during Season 11 and experienced the busy life of a new mom to baby daughter Aspen King Edmonds in Season 12. "My mind was often foggy as I filmed but I put on a great face and did it because I loved being a Housewife and was so grateful for my opportunity. It was only after the season was filmed that I felt I was finally out of the newborn fog and I could look back on the past few months of season 12 with clarity," she wrote. "I had no idea how exhausted I actually was until I wasn’t exhausted anymore! Season 12 was a real challenge for me."

Meghan King Edmonds Details Her IVF Journey to Baby No. 2

The RHOC mom said she realized at the Season 12 reunion that now was the right time to step away from the show as she started her second pregnancy, this time with twins. Meghan said that she's "sad to leave RHOC" and Orange County. She shared her decision with Andy Cohen when they met up in their mutual hometown of St. Louis over Thanksgiving. "He was completely understanding," Meghan shared. "In fact, all of production has been nothing but understanding and supportive of me and my decisions every step of the way."

Holiday rendezvous in our hometown with the talented Mr @bravoandy

Meghan also wrote in her blog post that she hopes to spend more time with her former St. Louis Cardinals star and current baseball commentator husband, Jim Edmonds, during the baseball season, as well as her stepchildren, who live full-time in St. Louis. "So Jimmy and I have decided to dig our roots into the midwest as we begin to build our dream home for our rapidly expanding family," she wrote. "We also continue to focus on K Hall Studio (based in St Louis) and my line, The King Collection."

“Today is a bittersweet day for me...” read my #RHOC announcement on my blog (link in bio) #somanymemories 😪❤️🍊

Meghan has also come away from RHOC with a couple of BFFs. "I have made soul sisters in Shannon Beador and Tamra Judge and that can't be lost," she gushed. "They have touched my heart and I would do anything for them and I know they feel the same way about me - what a gift to have found that on RHOC!"

Meghan joined RHOC in Season 10 as a fairly-newlywed to her husband Jim. Fans have watched Meghan navigate the world of being a stepmom, launch multiple business ventures, undergo IVF, and welcome daughter Aspen into the world during her time on RHOC. Meghan announced that she is expecting again during last season's RHOC reunion. She later revealed on Instagram in December that she is pregnant with twin boys. Her due date is in June 2018.

Catch up with all of the RHOC ladies, below.

What Did the OC 'Wives Do After the Reunion?
Life is better as an Insider
Bravo Insider is your VIP pass to never-before-seen content, exclusive giveaways, and so much more!
Sign Up for Free
All Posts About
Andy Cohen
Meghan King Edmonds
Shannon Storms Beador
Tamra Judge
The Real Housewives of Orange County
Jim Edmonds
Related