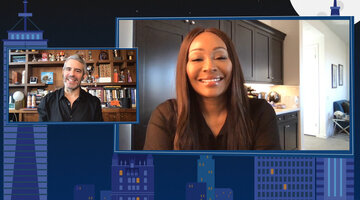 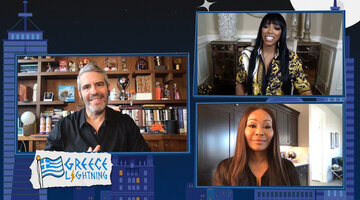 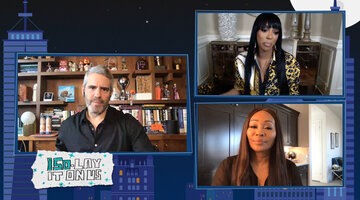 Andy Cohen spilled some piping hot tea on The Real Housewives of Atlanta during his appearance on SiriusXM's The Jenny McCarthy Show back in January, revealing that Porsha Williams' fate on RHOA was up in the air after she and her then-husband, Kordell Stewart, decided to call it quits after she filmed Season 5, her first season of the show.

"There was a fairly healthy dialogue amongst the producers about whether Porsha was gonna come back at that time," Andy told the eponymous radio host. "She got up there at that reunion, and I was watching her, and [when] I left, I was like, I stan for Porsha. That was incredible, and she cemented her place on the show. She gave like a two-minute soliloquy about who she was and how she was gonna live her life going forward, and this was not gonna define her, and she's stronger than this. And I was like, I totally underestimated this woman, and look at where she is now on the show."

In the months since Andy's interview first hit the airwaves, it has gotten picked up by the blogs and by The Daily Dish. So when Andy welcomed Porsha via video chat to Watch What Happens Live with Andy Cohen: @ Home on April 5, he said he felt like he should address his comments with the Atlanta Housewife.

Andy gave Porsha the floor to respond to what he said during the WWHL After Show (clip above). "My reaction to hearing that was pretty much that my heart was shown. I really didn't come to that reunion with an agenda. I was very broken in that reunion," she explained. "You guys had asked if [Kordell would] be there, and when he told me no, I felt like, 'Oh, I'm on The Housewives of Atlanta, he won't come and support me, it's over.' So I really was just showing my heart."

Porsha went on to say that hearing that how she handled herself at the RHOA Season 5 reunion has stuck with Andy all these years later validated her decision to live openly and honestly following her divorce from Kordell. "When you said that and you said how it touched you and you made sure that all of it got on the show, it just solidified what I do now. And what I do now top of all, it's just me, crazy, whatever my life is, I just show it. I'm just transparent," Porsha shared. "And you just pretty much confirmed that is the right thing to do."

Porsha's fellow WWHL: @ Home guest Cynthia Bailey was also proud of how her friend carried herself at the RHOA Season 5 reunion. "I feel like that moment was kind of like the turning point for Porsha, just really do Porsha and just be Porsha," Cynthia said. "I was one of the first to meet you. It was Nene [Leakes] and I. You didn't seem like you were able to be yourself, and I felt like after that reunion, it was like, 'I'm doing me.' I thought it was very powerful."

Porsha previously spoke about Andy's comments on Dish Nation, sharing how she has "come a long way" since her first season of RHOA. "I do have to thank Rickey Smiley for part of that glow-up because it was my opportunity coming here with y'all, sitting in on the radio show, and him saying, 'You know what, I like this girl. I want to give her a chance,'" Porsha said. "I love Dish Nation for my journey. I love every single part of it."

She added one final thought on Kordell: "Thank you, ex. Next."

Sip up even more tea by checking out The Real Housewives of Atlanta Season 12 After Show, below.

Life is better as an Insider
Bravo Insider is your VIP pass to never-before-seen content, exclusive giveaways, and so much more!
Sign Up for Free
All Posts About
Andy Cohen
Cynthia Bailey
Nene Leakes
Porsha Williams
The Real Housewives of Atlanta
Kordell Stewart
Related