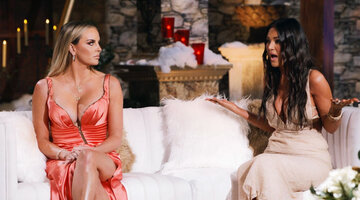 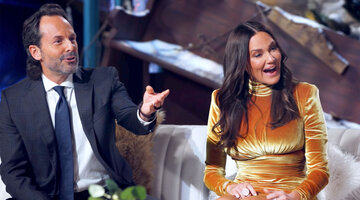 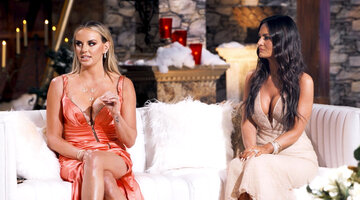 The Real Housewives of Salt Lake City Season 3 reunion will commence on January 25, and the cast members will get the opportunity to try to resolve their issues, fix their broken friendships, and, potentially, start new feuds.

While cast members Lisa Barlow, Heather Gay, Meredith Marks, and Whitney Rose, have all been through the reunion experience twice before, it’s a totally new experience for Season 3 friends Angie Harrington, Angie Katsanevas, and Danna Bui-Negrete.

Ahead of the reunion taping, the three newbies (who were all meeting host Andy Cohen for the first time!) chatted with BravoTV.com to share how they were really feeling about taking the stage to discuss the biggest moments from the season. They also each revealed who they were most looking forward to addressing.

The salon owner was mostly “excited” about attending her first reunion, though she did have some trepidation.

“Lots of emotions today, but I’m ready to expect the unexpected,” she said, before adding that she was advised to “be authentic, bring the truth,” and be herself.

Before she left for the Big Apple, Angie K. leaned on her loved ones, and she was happy to see some positive comments from her fans.

“I talked to friends [who] support me and love me and really gave me some amazing well wishes, kind and supportive words,” she added. “I read some really beautiful comments and posts that were sent to me by fans and friends that just really gave me a positive energy going out the door and remembering who I am.”

While Angie K. said she was “looking forward” to seeing all the ladies on the stage, she did share that she’s currently the closest with Lisa, Whitney, and Danna.

The real estate agent shared that she was “super excited” to “bring some diversity, some culture, and just a little bit of Utah action” to the Season 3 gathering. She was also grateful for the opportunity to hash out some things that happened on the show.

“I’m excited to address some issues, calling some of the ladies out, and hoping that they will be held accountable for their actions,” Danna said, before revealing that she would be “addressing” Heather and Meredith specifically.

Danna did some homework before arriving at the reunion.

“I had to take a step back, watch some of the episodes, brainstorm a bit, come up with a drawing board, and I was able to learn and know how to address things and confront situations that I wasn’t able to do [before] on the show,” she said about preparing to hit the reunion stage. “But now that I’m here, I feel more confident mentally to tell the ladies how I feel.”

Like Danna, Angie H. wanted the reunion to be a place where she could reveal her truth.

“I’m ready to clear the air. I’ve been accused of a lot of things that I am not, so this will be a good opportunity for me to show who I really am,” she explained. “I’m going to have to fight a lot of battles, but I can do that.”

Angie noted that she wants to address her issues with Whitney, because she still “care[s] about her.”

“I just want to ask her, ‘Why? Why? I was nothing but a good friend to you, I don’t understand,’” Angie H. continued.

She’s also looking to get to a “better space” with Lisa, although she doesn’t “have a lot of hope for a full reconciliation.”

“But I would like to be heard and understood, and I’m willing to hear and understand them as well,” she said.

Finstas, Explained: Everything to Know About the RHOSLC Social Media Drama (UPDATED)

For her reunion prep, Angie brought a few tools from Utah that didn’t actually make it to the stage.

“Quite honestly, I brought sage and crystals, but I left them in my hotel, so I’m kind of screwed that way,” she shared. The crystals and sage may not have made it to the set, but Angie H. still felt calm about what she was walking into.

“I try to live as honestly and as authentically as I can. So that means I don’t have to backtrack or be paranoid about what could come out, because I am what I am, and that’s it,” she concluded. “Good, bad, ugly, all of it.”

Did the aforementioned ladies’ preparation pay off? You’ll have to tune in to the reunion to find out.

The two-part RHOSLC Season 3 reunion kicks off on Wednesday, January 25, at 8/7c, with Part 2 airing on February 1. Catch up the next day on Peacock or on the Bravo app.

Who Are RHOSLC Season 3 Friends Angie, Angie, and Danna?