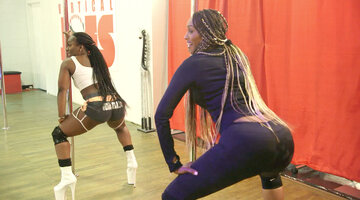 1:08
Preview
Cynthia Bailey Gets a Private Lesson from a "Twerk Technician" 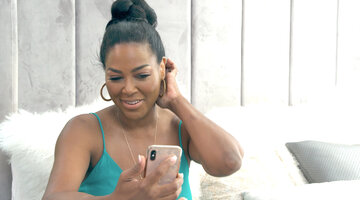 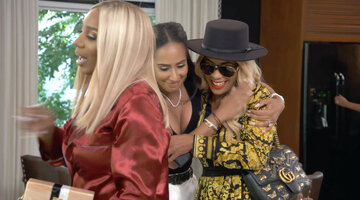 1:24
Preview
Yovanna Momplaisir Returns to The Real Housewives of Atlanta!

The biggest mystery of Season 12 of The Real Housewives of Atlanta can be summed up in one word: Snakegate.

Following rumors of a recording of Cynthia Bailey badmouthing Nene Leakes, we were wondering right along with the Georgia Peaches about what was said on this alleged tape, who recorded it, and if it actually exists. Every time the RHOA ladies tried to get to the bottom of it, some major drama broke out before we could get any of our questions answered.

We finally found some resolution in the Season 12 "Secrets Revealed" episode when all of the women gathered with the supposed "snake" Yovanna Momplaisir at Kandi Burruss' house to settle Snakegate once and for all (clip above). "What was revealed to me today and Kandi was that Yovanna pretty much made it up," Cynthia announced before Eva Marcille confirmed, "There is no recording."

Kenya Moore then broke it down like so: "So what you're saying is, she admitted to telling basically a lie about an audio existing because she was pissed at you from the Bailey-Que?"

Yovanna showed remorse for her actions. "I was trying to come clean in Canada when I said that to [Cynthia] and Kandi earlier today," she explained to the group. "I told them, and I've been apologetic to them. It was a big misunderstanding, and it was taken way out of proportion."

Cynthia isn't ready to close the book on Snakegate just yet, either. She posted a rather cryptic message that seemed to touch on the situation on Instagram on May 7. "Never explain yourself. Your friends don’t need it [and] your enemies won’t believe you," Cynthia wrote in the caption to a throwback photo of herself modeling with a snake necklace around her neck. She also included "#snakegate" in the post.

never explain yourself. your friends don’t need it & your enemies won’t believe you. #tbt #modellife #snakegate

We'll get the latest on Snakegate during the RHOA Season 12 reunion, which kicks off Sunday, May 10 at 8/7c. Get your first look at the drama, below, and catch up on this season of RHOA through the Bravo app.

Your First Look at The Real Housewives of Atlanta Season 12 Reunion
Life is better as an Insider
Bravo Insider is your VIP pass to never-before-seen content, exclusive giveaways, and so much more!
Sign Up for Free
All Posts About
Cynthia Bailey
Eva Marcille
Kandi Burruss
Kenya Moore
Nene Leakes
The Real Housewives of Atlanta
Yovanna Momplaisir
Related

Was RHOA's Yovanna Really "That Bitch?"

Porsha Calls Eva Out at the RHOA Season 12 Reunion