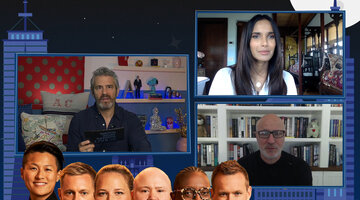 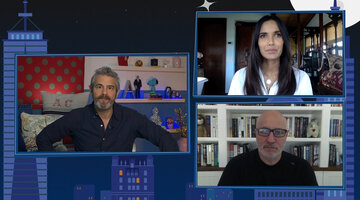 With so many talented chefs competing in Bravo's Top Chef every season, we just don't know how the judges decide who wins and who goes every elimination challenge. So we can only imagine that Season 17 was even more difficult than most with 15 finalists, frontrunners, and fan favorites returning for a new All Stars season in Los Angeles.

The final three cheftestants definitely didn't make it easy on judges Padma Lakshmi, Tom Colicchio, Gail Simmons, and Nilou Motamed in Top Chef's Season 17 finale, which aired on June 18. Stephanie Cmar, Melissa King, and Bryan Voltaggio were tasked with preparing the best four-course progressive meal of their lives, and they definitely did just that, blowing away the judges and a table full of some of the most impressive members of the culinary world in Tuscany, Italy.

Top Chef Season 17 Winner Was Actually Afraid to Return to the Competition: "It Scared the Crap Out of Me"

So, how did the judges ultimately decide to give the coveted title of Top Chef to Melissa? "It's always tough to decide," Padma said of the final Judges' Table during an appearance with Tom on Watch What Happens Live with Andy Cohen: @ Home on June 18 (clip above). "In this case, they were [all] really great meals."

Tom agreed with Padma, and noted that he expected nothing less in a Top Chef finale, especially in an all-star season. However, he explained what put Melissa's meal over the edge. "The meal that she put together, I would put up there as the best we've ever had on the show. It was really fantastic," Tom shared. "She did something that was really interesting. She took her sense of self and her heritage, her background of cooking and just perfectly wove it into where we were — we were in Tuscany — using local ingredients. It just was spectacular."

The head Top Chef judge also said on WWHL: @ Home that he thinks Melissa ranks in the top 10 or 15 percent of all 17 winners of the culinary competition.

🚨 SPOILER ALERT 🚨 On #WWHL, @TomColicchio revealed where the Season 17 @BravoTopChef winner ranks among the rest of the #TopChef winners: pic.twitter.com/mObyO0sH2v

Melissa later joined Padma, Tom, and host Andy Cohen for the WWHL: @ Home After Show, where she shared how she feels to be the newly crowned Top Chef. "It's just been such a surreal moment of my life right now, so I'm very excited," she said.

Though Tom's reaction to hearing Melissa would be fusing elements of Chinese and Italian cuisine in her finale meal made her "second guess things," as she said in an interview during the finale episode, the head judge explained that he was actually looking forward to tasting what the cheftestant was serving up.

"I was very excited about the way Melissa was cooking, just off the bat. The dishes all made perfect sense. They weren't over-intellectual, they weren't forced, they felt natural. The food was absolutely delicious," he said during the WWHL: @ Home After Show. "There are similarities between so many different cultural foods, and she was able to just make it work without forcing it, without a misstep. And so, no, I thought it was fantastic. If I didn't come off as effusive then as I am now [it's] because I had to keep it in."

Melissa said she appreciated that Tom ultimately understood what she was going for with her finale menu. "I just wanted to say thank you for seeing me and my food, because that's what I was really trying to present is blending these cultures together can be difficult, and it can get ugly if you go too far with it," she said. "So I was really trying to do it in a very tasteful, subtle way but make it modern and fun."

Padma similarly thought Melissa did a "beautiful" job with her finale meal. "[You] just paid so much respect to the Italian ingredients and show us how that can be used into your own cooking, into your own culture," she shared. "It was lovely."

Want more Top Chef? Catch up on the latest season through the Bravo app.