I'm in New York during an epic blizzard. What?! I'm a California girl, and this is a first!

I'm jumping in with Yolanda and Bella and the vertical/horizontal issue with her phone. I'm so happy, because now I know it's not just me!

Just to clarify...in Brandi's last blog she said she came to our poker party and was so hungry because it was dinner time and we had no food. Aww. I guess she has to blame someone for her actions. But honestly, folks? It wasn't EXACTLY dinner time. It was between 8:30 and 9:00 PM. And it wasn't a DINNER party. It was a POKER party. A DINNER party is where you sit down at a table and have dinner. A POKER party is where you sit down at a table and play poker. And even so, we had lots of hors d'oeuvres. Such as those "little pancakes that are for children" that are usually known as blinis. Take a peek at the end of last week's episode. You'll see us all gathered in my kitchen, and there are trays of uneaten food on the kitchen island. Things got crazy as soon as we sat down to play the tournament. Even though the food was catered and delicious (I know this because I ate a lot of it before the ladies came over), everyone was too distracted to actually eat it. Well, maybe Brandi didn't see all the food, and that's why she got so tipsy and acted like she did. And thank goodness she was a little tipsy, or that gash in her arm could have been so much more painful. 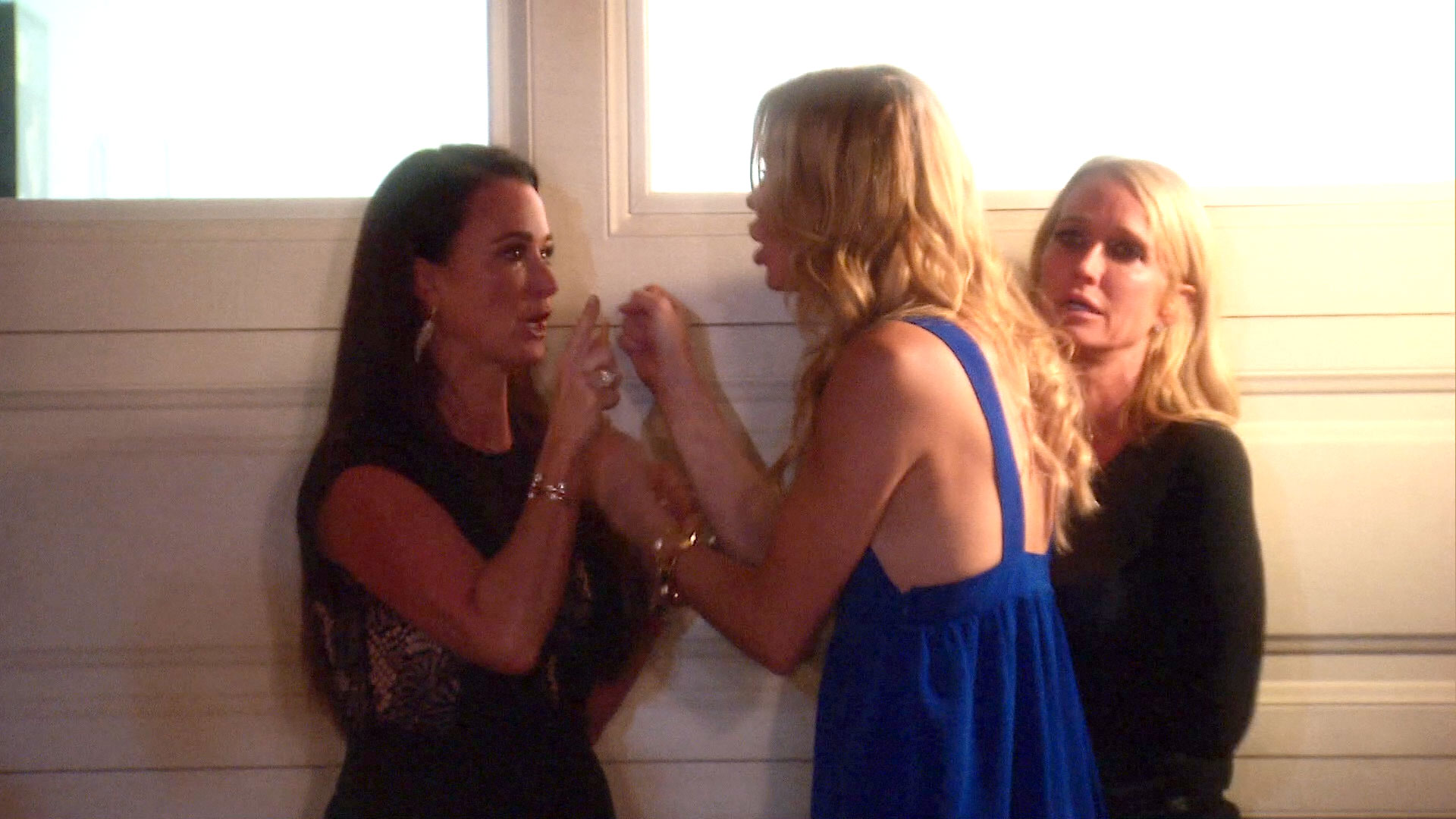 As far as having a nanny (which we don't have, BTW) take Jesse away for the evening? I'm not quite sure where we're supposed to send an 11-year-old boy at 10 PM when we couldn't arrange a sleepover. Nor did Vincent and I think it was necessary. After all, we weren't having a group of Portuguese sailors over for a poker game. It was four women. If we're ever moronic enough to invite Brandi over again, I'll make sure Jesse is safely sequestered away from our property. I wouldn't want her not to be able to express herself fully with "f---, c---, p----, c---, b---," etc. as loudly and as often as she pleases.

If we're ever moronic enough to invite Brandi over again, I'll make sure Jesse is safely sequestered away from our property.

Kim must be in severe pain, or why would she have taken someone else's meds? Why is she at a party? I know she's going through so much with her ex-husband, Monty, and is very vulnerable, but is Brandi really the best friend for her? I know sibling relationships are complicated, but I still believe Kyle has her sister's best interests at heart more than Brandi does. What was the point of keeping Kim away from Kyle? Kyle wanted to understand what was happening with her sister. Brandi admitted she was drunk. That's who someone who is trying to stay sober has as her support system? Brandi has her own issues to deal with and watching her with Kim was disturbing and not a healthy combination, IMO.

Lisa R.'s charity event was lovely. I adore her beautifiul home and it has such a gorgeous view! I definitely bought a couple of pieces that I'm crazy about. I was so happy to help out this great cause.

I told Lisa V. when I stopped to pick her up (and seriously? THAT closet? Watch swans?! Fabulous!) that I can't stand unresolved stuff. It's sort of annoying me that I don't understand Brandi's aggressive behavior towards me. So I decided to talk to her about it. Two women just communicating, hopefully to maybe find some common ground. A deep and lasting friendship is probably not in the cards, but I'm hoping that at least we could have some resolution? Crazy of me? Maybe so, because I wasn't aware I was "lecturing" her. That certainly was not my intention. I'm not her parent or teacher. I'm just trying to understand. Brandi acts like I'm offending her by wanting to understand her. Clearly, my actions towards her have been insulting and mean. Wait. That's how she is towards me. I guess I am finally understanding her, after all. She attacks, then deflects. She's becoming predictable. Yawn. 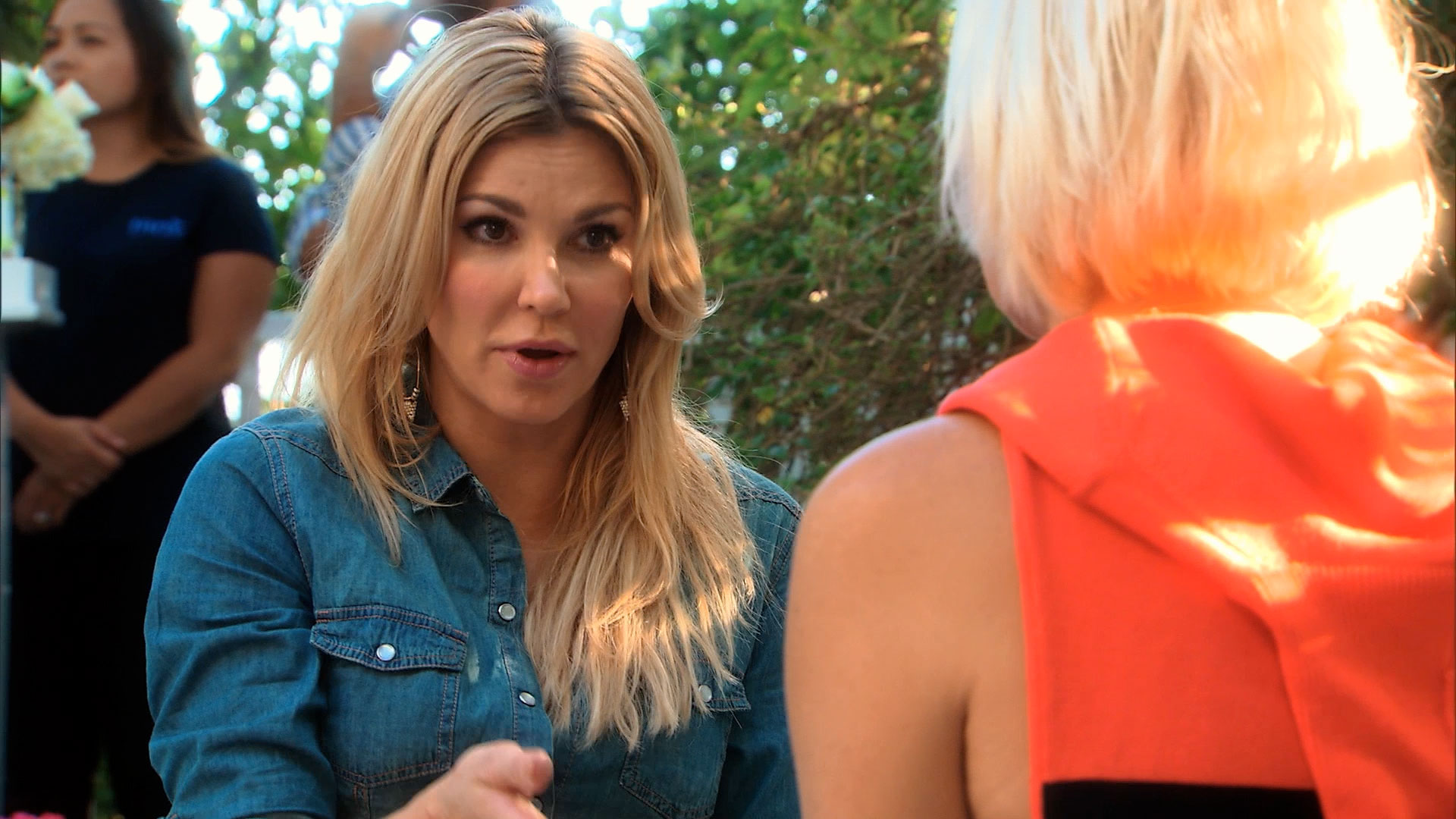 I'll be auctioning off a lightly used poker tournament trophy (held proudly for a moment by Brandi), that was left at our house for charity. Opening bid is $100.00.

All Posts About
Eileen Davidson
Related Stories
The Daily Dish

Carlton Gebbia: I Would Return to 'RHOBH'