Lisa Rinna: I Needed to Unburden Myself 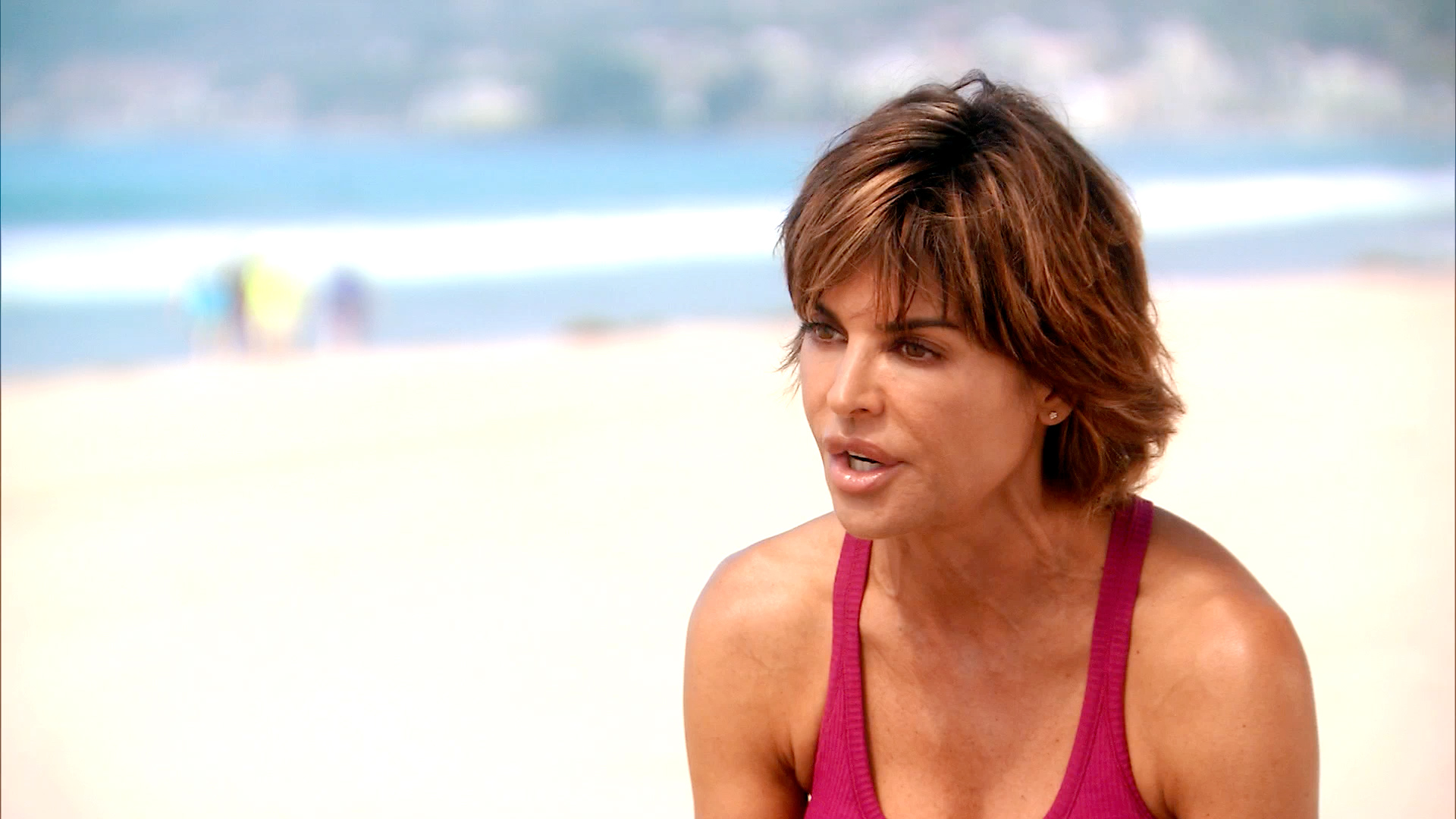 What a week it was traveling to QVC to sell the Lisa Rinna Collection. We had a great show and, as always, it was so much fun thanks to all of you. We sold out of the fabulous wide-leg jumpsuit! But, don’t worry, I will make more!

It’s one of my great joys to design a line of clothing. I love fashion and to be going into our fifth year at QVC is remarkable. It really does take a village to create my comfy cozy California chic line of clothes for women of all sizes, and I’m so lucky to work with the most amazing team! Thank you, QVC! I'm honored to be part of such a wonderful family. It’s such a blessing to love what you do, and I do!

Now we enter back into this wild world of RHOBH women. Erika invited us over to meet her husband, Tom, and I was excited since I had heard so much about him personally and professionally. What fun to sit down with him and have dinner.

Erika being new to the group, I felt it was important to be there and support her. As it happened, a lot of the group had previous commitments, so, in the end there were only six of us instead of 14. Erika's home looked amazing, the table was gorgeous and it was a beautiful setting. And yes, of course, I wore leopard and so did Erika. Two Cancers doing their thang.

I was surprised that Yolanda wasn't there since Erika has been such a loyal and supportive friend to her. I knew this was somewhat of a big deal for Erika to have us all over to meet Tom, who is a very busy man, and I thought surely Yolanda would make the effort to join us. I guess Yolanda didn’t “count her spoons” that day and wore herself out at lunch with Brandi and Kim. Hmmm... oh well.

The dinner was awkward and uncomfortable to say the least. I am all for the group talking out issues, like this whole “web” conversation of Kathryn telling LVP what Erika had said about her, but I believe there is a time and a place, and this was not the time OR the place since Erika was our hostess and we were at her table. Erika was understandably horrified. I was sitting next to her, and I could feel it. It was a mess at the time and watching it back, I still can't figure out what Kathryn is saying. What was her point? She makes no sense to me, and we just go round and round about who knows what. I was so happy for that dinner to be over, but I still have to thank you, Erika, for being a gracious hostess and inviting us to your beautiful home to meet your husband.

Preview
Is Kathryn Coming on Too Strong? 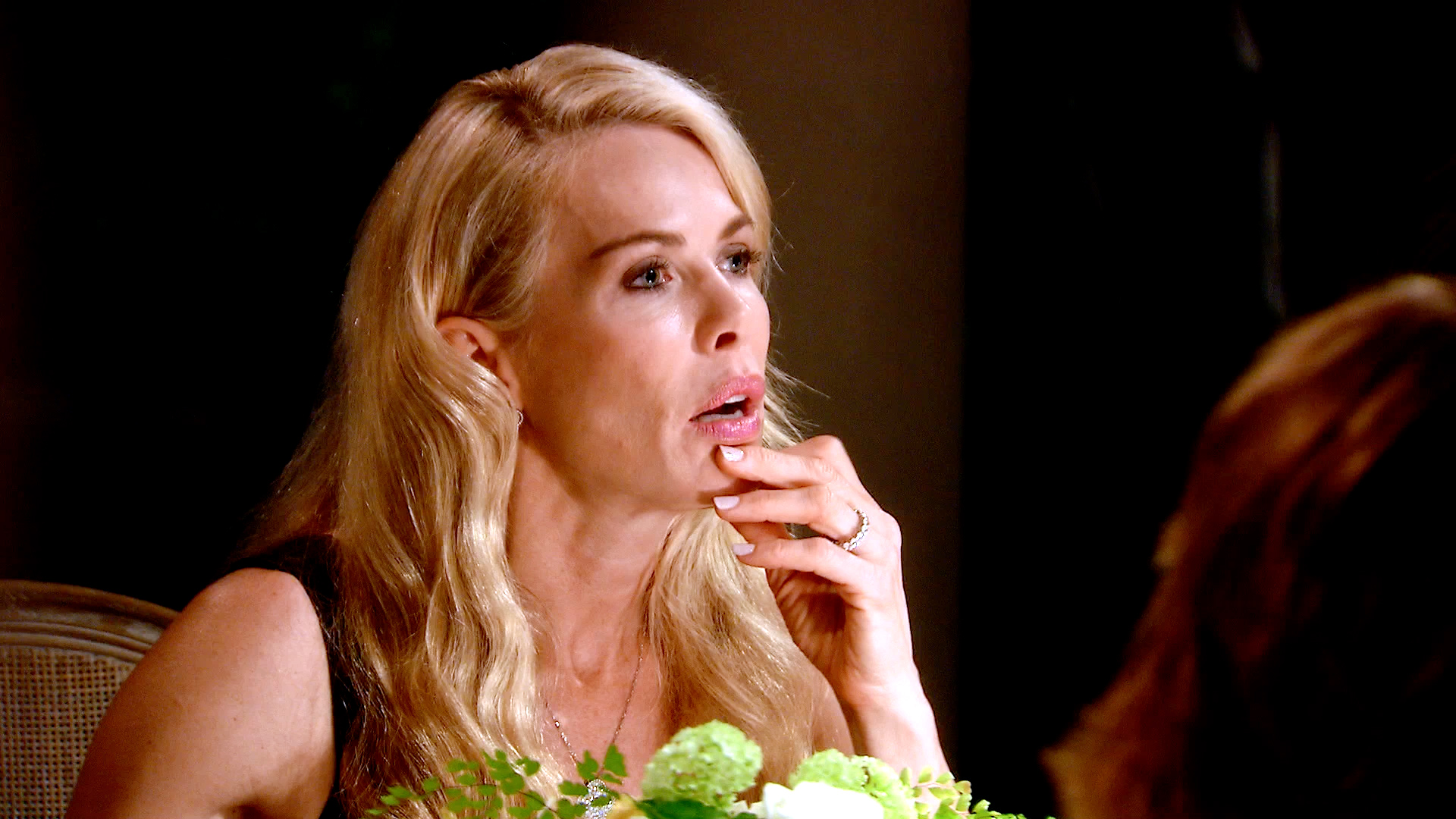 We see Kyle go to Yolanda's to talk about the email Yolanda sent to Kyle that we were all cc’d on. Yolanda seems angry but insists she is over it. She says, “I'm not going to focus on some crazy woman calling me names in public.” Well that certainly sounds like another label now, doesn't it? Now I’m “crazy”! The very thing Yolanda says is not OK to do to anyone… Projection maybe? Either way, I feel that Yolanda needs to connect her head to her heart to figure out what’s going on emotionally inside of her that she is not dealing with. There may be more going on than meets the eye.

Eileen and I meet at the beach to discuss what went down at Wally’s the week before, and it takes a very different turn. Being with my good friend, Eileen, I know I can be completely open and transparent, so I share for the first time how I feel about LVP and Kyle in the conversation about the inconsistencies of Yolanda and her illness. Let me give you a little history lesson... last year when I came into this group, LVP was knocked down, shattered, and she felt ganged up on and beaten down by this group of women. She spent hours telling me about how horrible they had all been to her and how she had done nothing wrong. She was so happy to have me there as her support and I felt that. I heard over and over again how awful these women were to LVP. I reminded her that I needed to have my own opinion of the group, and I couldn’t let how she feels dictate my opinion of them. She really felt victimized. This was a broken woman, so I came into the group being her support…her cheerleader, so to speak. I give people the benefit of the doubt, and if that makes me a people pleaser then so be it. I always prefer to see the good and not the bad in people whenever I can.
So yes, I did protect LVP and stand by her...I wouldn't change that. That's what friends do. And yes, I have also seen LVP try to pit people against each other, but because of my loyalty to her, I haven’t openly addressed how it has affected me up until this point. I fully own the fact that I brought up the Munchausen convo that I had with my hairdresser. From the start, I didn't feel good about having that particular conversation, and when I brought it to Kyle and LVP, they were the first ones to bring up the inconsistencies about Yolanda and her illness! LVP called me and encouraged me to share the conversation I had with my hairdresser. I own the fact that I was the one to use the word Munchausen, and let me be very clear here: No one put a gun to my head, and I take full responsibility for bringing the topic up. I own that. But LVP simply needs to own the fact that she encouraged me. That's all. 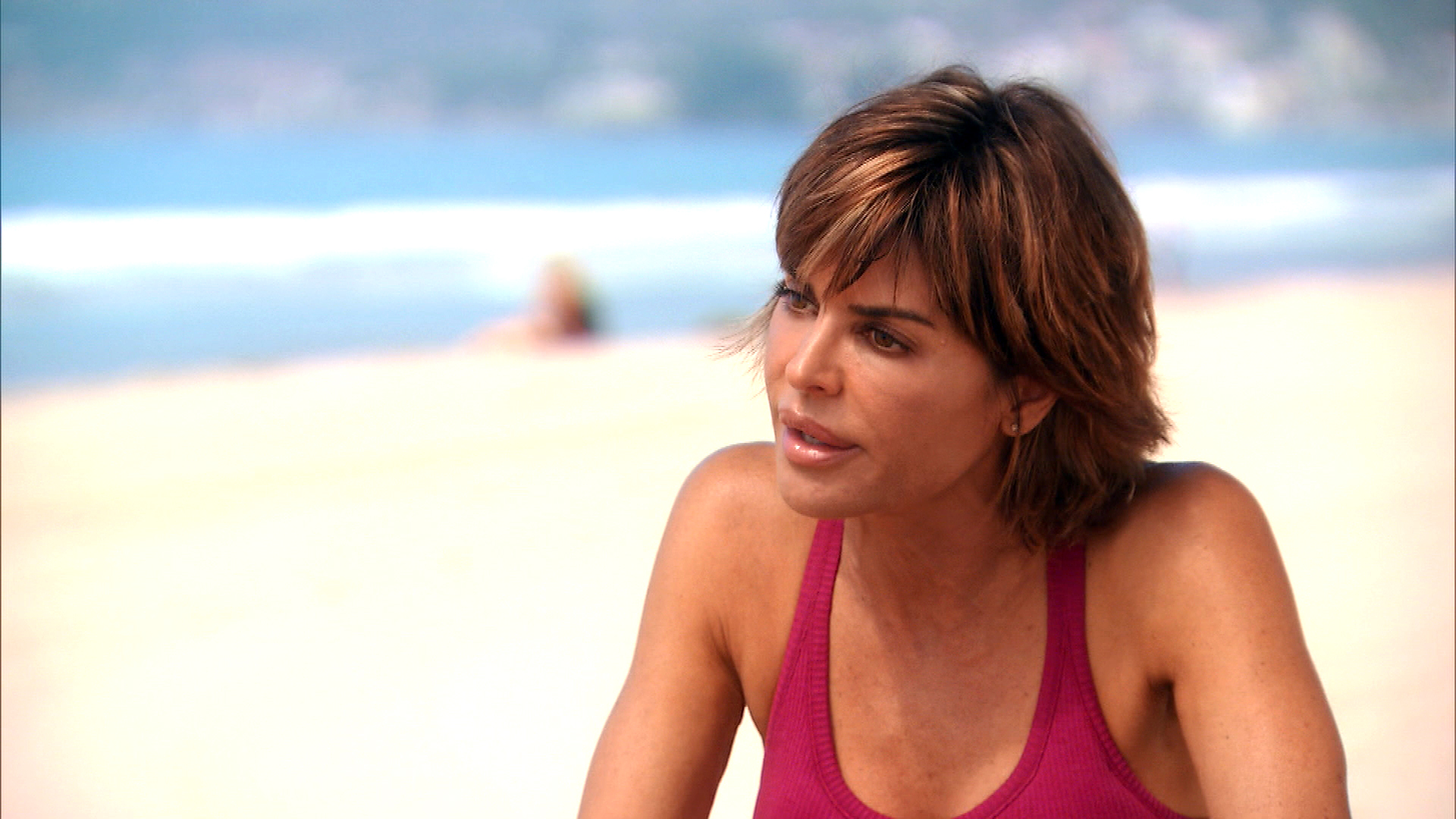 I have strong feelings, and yes, I expressed them to my friend Eileen, because I felt safe enough to do so with her. I needed to unburden myself. Was it strong? Yes, but I have a strong conviction and passion about how I feel. My opinion is my opinion, and I will never say I’m sorry for being honest. The one thing I cannot tolerate is injustice for whatever reason, and I always need to express my feelings when injustice is in the air. That’s just who I am, and I have to be honest about that.

Off we go to help improve a home for a family in need. What a wonderful thing Habitat for Humanity does for families that need some assistance to help them get ahead. Mauricio’s company, The Agency, has partnered with Giveback Homes in an effort to do this with 10 homes per year and what an honor it was to be a part of this one. Thank you for organizing such a meaningful experience for us, Kyle and Mauricio! We didn’t exactly “build” a house, and I’m not going to put Construction Worker on my resume, but I still think we helped in some small way.

The whole topic of LVP’s “web” has taken on a life of its own, hasn’t it? We never ever hear Erika actually use the words “don’t get caught in her web” when referring to her feelings about LVP. Talk about a classic case of telephone on steroids. Erika and Kathryn still have this issue left unresolved, and Eileen wants to take this time, while we’re all together, to have them hash it out. Luckily, both Erika and Kathryn are willing to talk and work out their differences with this topic, but other than their willingness to agree to move forward and hug it out, I’m not sure either of them feels a solid sense of resolution. Much like I say that my trust issues are through the roof, I can only imagine that Erika probably feels the same way I do as far as trust and loyalty goes in this group. 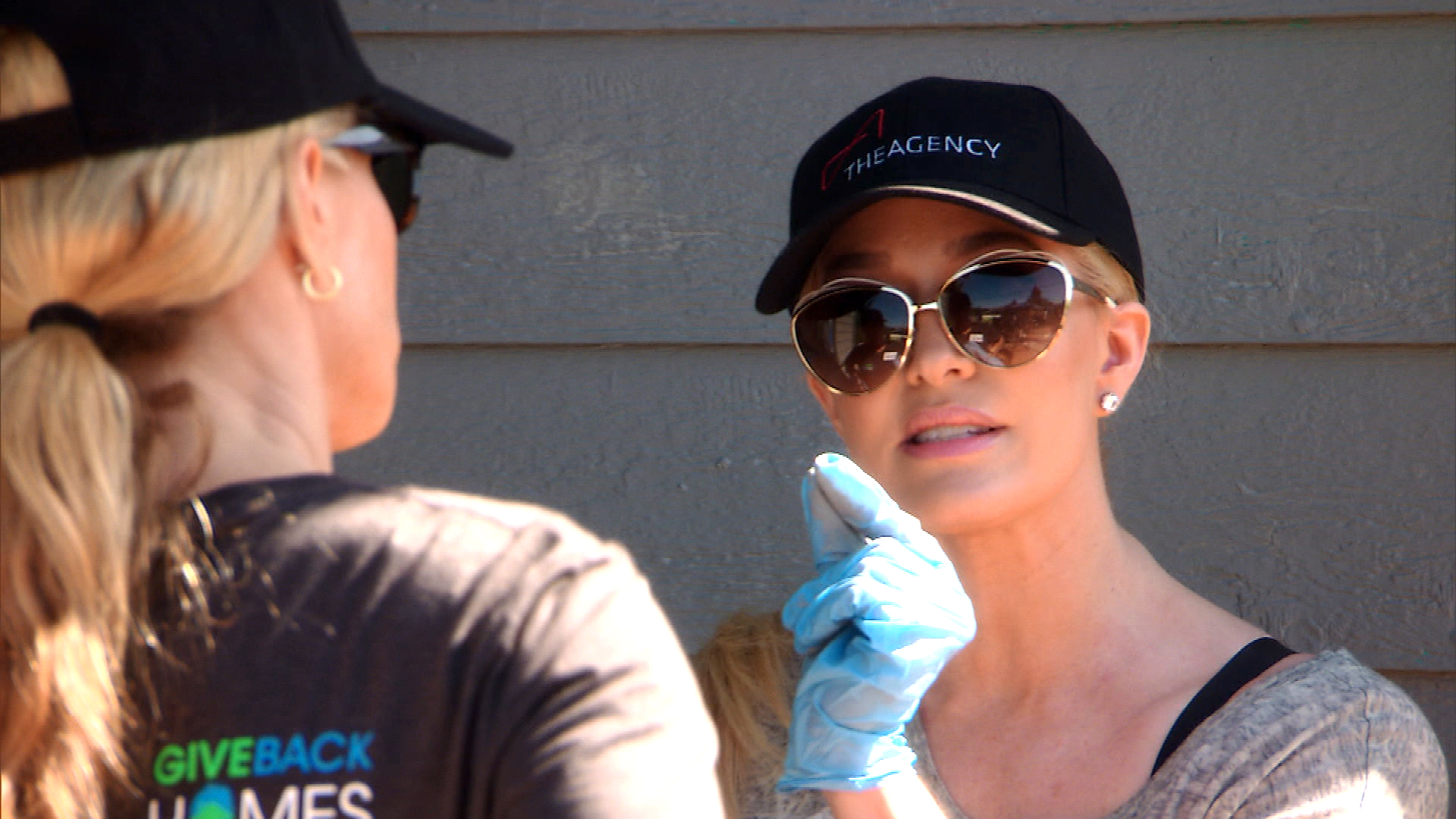 I’m still not entirely sure Kathryn fully understands the impact of what she did, but she’s certainly found herself tangled in her own sticky web, hasn’t she?

Before They Were Housewives: Lisa Rinna

All Posts About
Lisa Rinna
You May Also Like...
Recommended by Zergnet
Latest Posts