The World is a Wonder!

Miami is back, and I couldn't be more thrilled. This may be one of the most kooky, diverse casts I've ever encountered -- dentists, lawyers, models, Elsas. It makes for quite the spicy mix of magical drama.

Speaking of Elsa, in the spirit of her psychic premonitions, I'll be using my own deep powers of Housewives intuition to make my own predictions about what's to come. So join me as I peer into my crystal ball and reflect on this week's episode.

We start the season with Elsa making a prediction of her own (or at least confirming Marysol's "twice a year" psychic's prediction) that Marysol would meet a lot of new women and that there would be a lot of gossip and trouble. I think it's safe to assume this is true.

(Oh and a doctor told Elsa her ear looks like a banana.)

Prediction: There's lots of gossip and trouble to come.

We then meet one of our new ladies, Ana. She's a feisty Cuban lawyer, chef, and mother. (And yes, she cooks with clean hands.) Ana's self-described "modern family" family seems to be very apt between all the vagina and swinging both ways talk. Oh and the fact that Ana is separated from her husband. And they work together, did I mention that?

Show Highlight
Who Goes Both Ways? 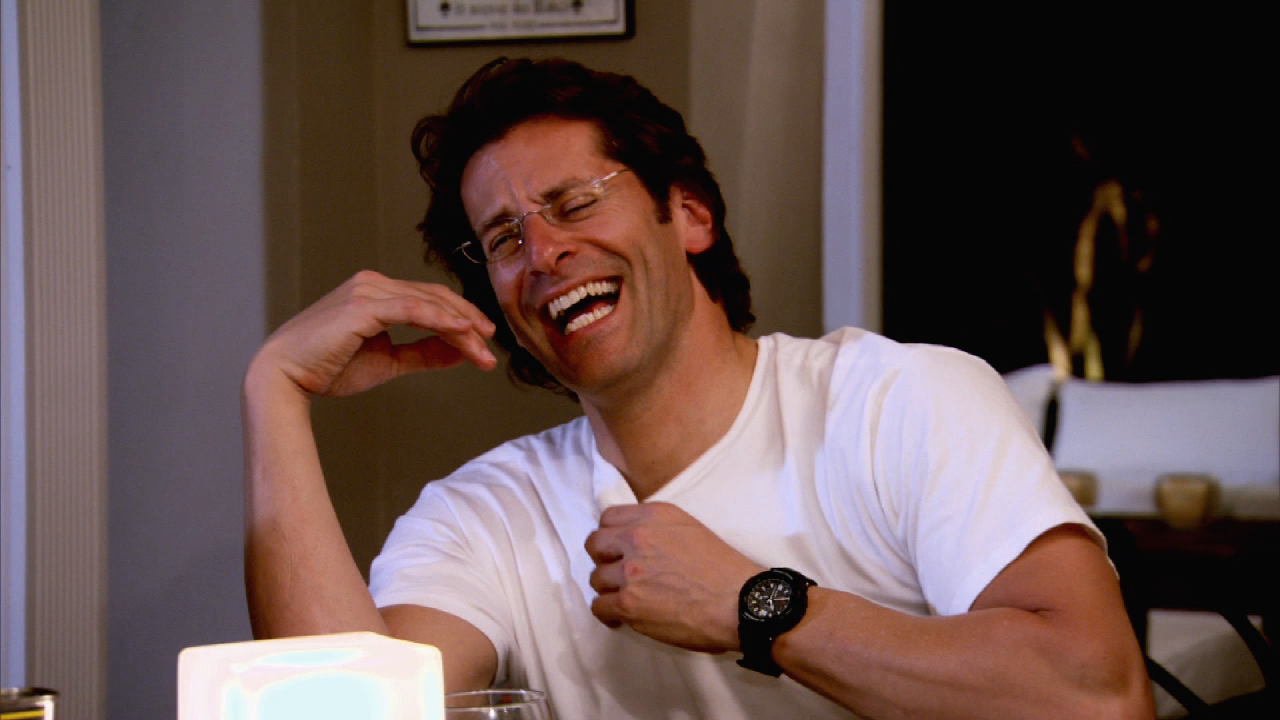 Prediction: Given how hectic Ana's life is, I'm guessing she and the ex are going to get into it at some point. How could you not when you work with your ex AND he comes to dinner all the time.Ana comes up again once we meet Karent, the dentist to the stars. Allegedly she's been texting with Karent's Latin lover/soap star boyfriend, Rodolfo Jimenez. Karent's not worried since Rodolfo doesn't go for "older women" (ouch!) and seems pretty secure in their power couple status.
Preview
This Boyfriend Doesn't Play Around 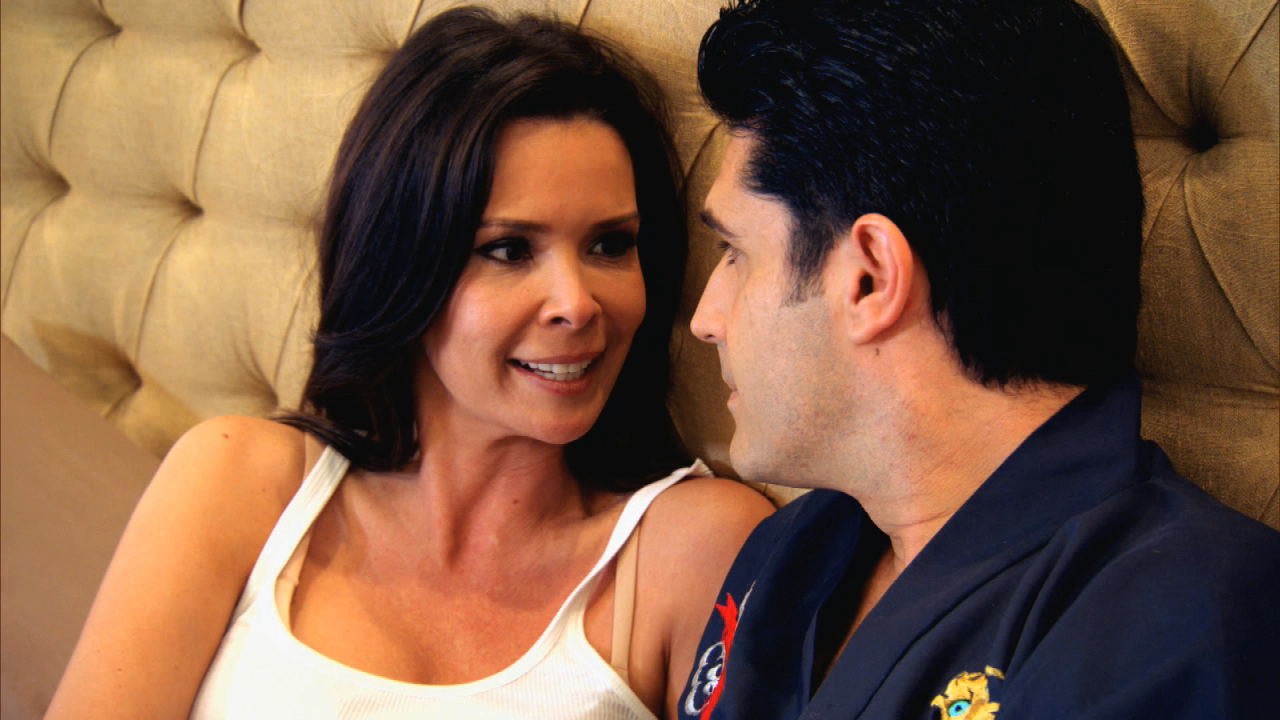 Side Note: That poor patient of Karent's! His head kept squirming around while he tried to talk to her in the chair, and it did not look comfortable.

Prediction: This Rodolfo character is too good looking not to mean trouble. And Karent will do Gloria Estefan's teeth at some point (that one may just be my wishful thinking).

Lea Black's back and buying up some new real estate on Star Island. Unhappy with the investment house she's purchased, she's looking at an entire house renovation which, knowing her, will be no small undertaking.

She also may want to rethink the pool. Why? Take a look at this shot of it and then get back to me.

On to Lisa. The wife of one of Miami's premier plastic surgeons (who specializes in boobs) enjoys shopping and spending her day with friend/housekeeper Daysy. We soon learn the perks of living with/working for a plastic surgeon -- on demand Botox and a some elective surgeries as recompense for a job well done.

Lisa and her husband are soon to be residents of Star Island. But wait, isn't someone else moving there too...

Prediction: Rival parties on Star Island between the Hochsteins and the Blacks. Plenty of Daysy hijinks.

Joanna Krupa is one fiery supermodel! When she found out that magazine wasn't giving her the cover, she wasted no time giving them a piece of her mind. Clearly Joanna gets what Joanna wants.

Her hunky, club-owner fiance and her sister, Marta, seem somewhat at odds, which is never good (especially since Marta lives with them).

Prediction: The mix of vodka, clubs, and Marta/Romain tension is bound to lead to one serious fight (at least).

We can only say one thing about Adriana -- SHE'S ON A BOAT! Or at least she may be living on one if Frederic can manage to fit a Baby Grand piano and a walk in closet on it.

Prediction: Adriana doesn't seem too stoked about the nautical lifestyle, so I'm expecting some serious stalling.Elsa's dog Napoleon was lost, and somehow after all the fuss about not giving out Elsa's number to the "perverts" of Miami on the missing dog posters, he is miraculously found...in the closet. Evidently he found his way into some Xanax and took a nice nap for a few days.

There's so much to say about the ensuing scene in which Elsa dispenses wisdom and introduces us to her energy box, but the most important takeaway is that "the world is a wonder!" (Just do yourself a favor and watch the clip.) 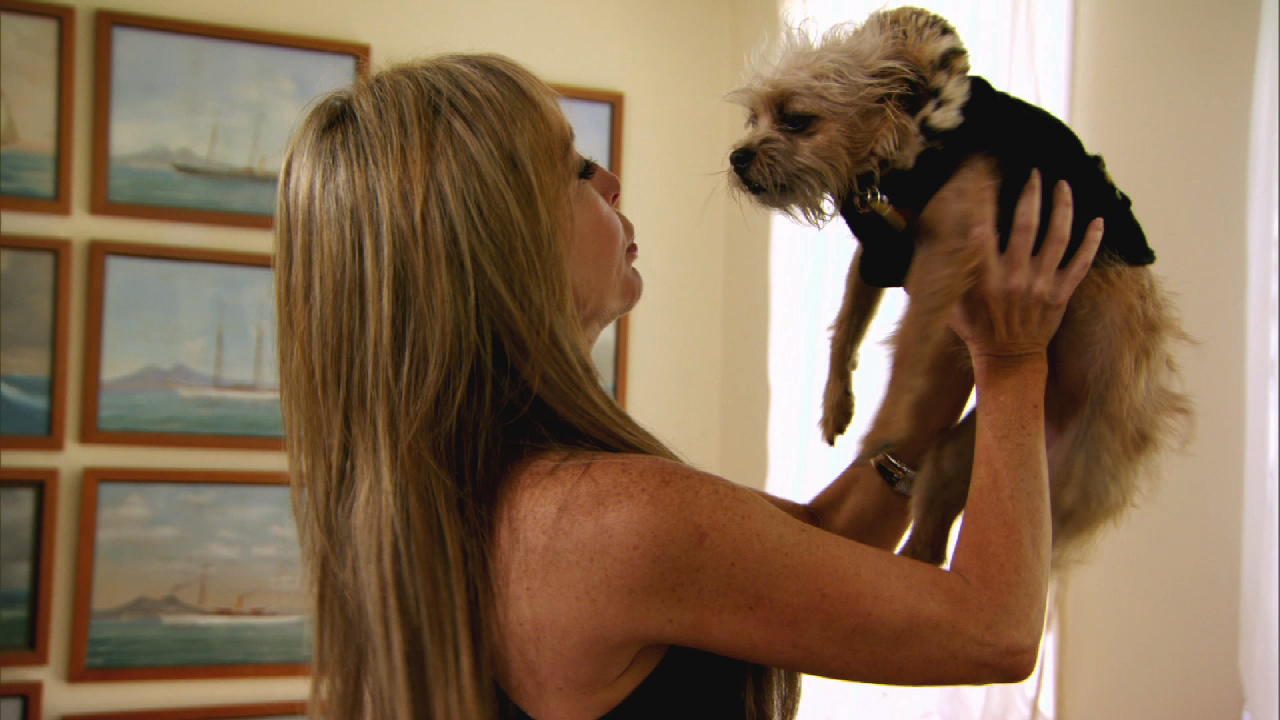 Prediction: Napoleon will get lost again, that much is clear.

Finally the girls all get together, introductions are given, and then Elsa faints. Not exactly the most propitious start to these new friendships.
Show Highlight
Elsa Faints! 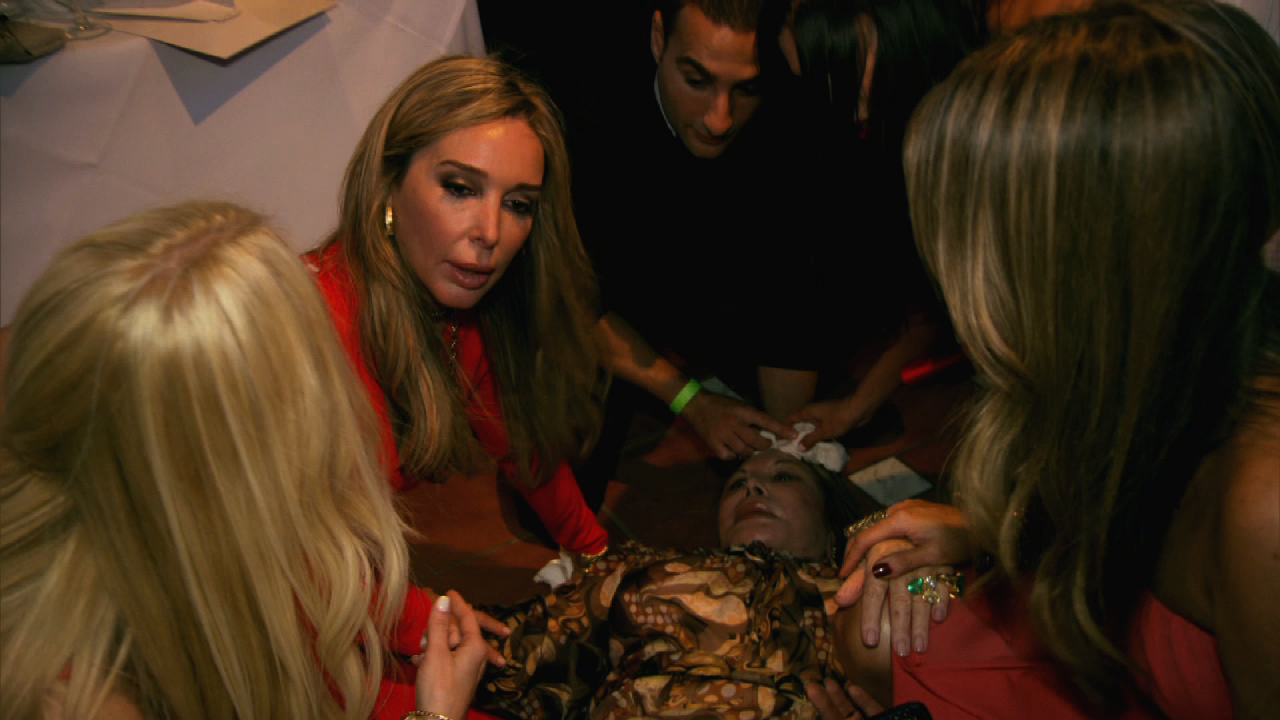 Prediction: Elsa will be fine. (Don't worry we know for a fact she is.)Next week we pick up where the Ana/Rodolfo texting drama left off. 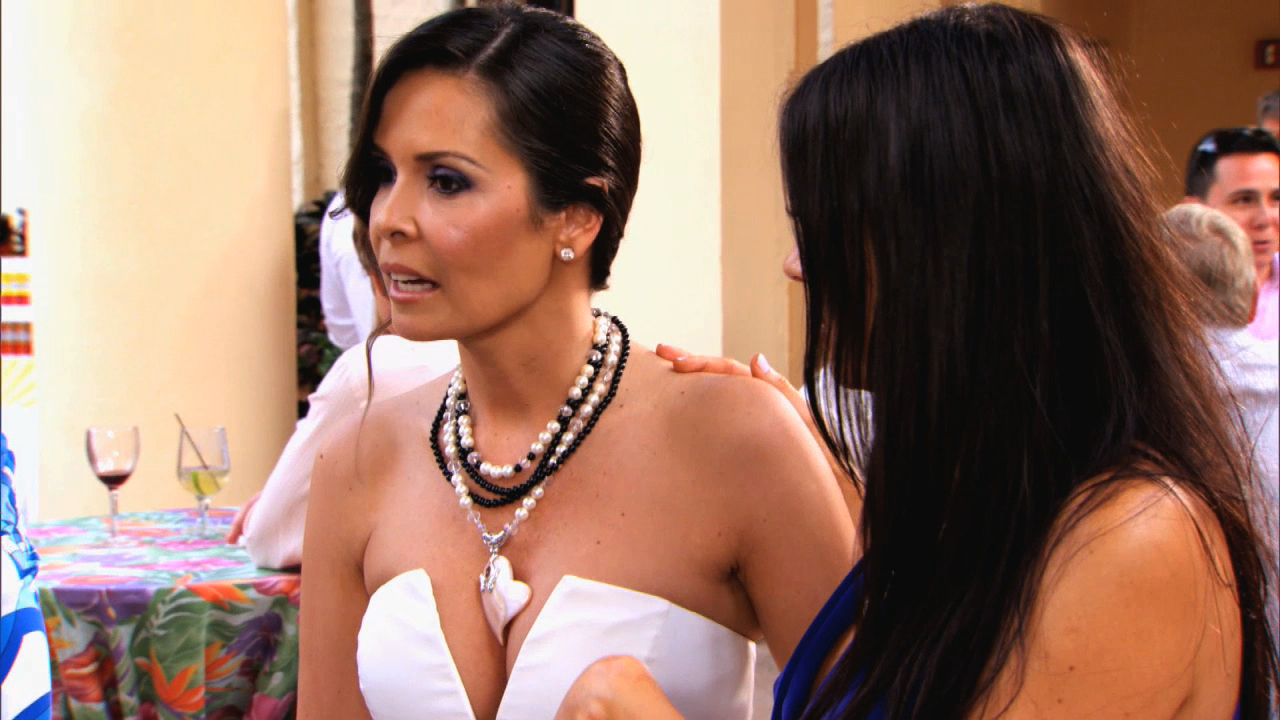 And don't forget to check out our exclusive webisode series, Havana Elsa, in which Elsa pursues her dream of becoming a coffee maven. 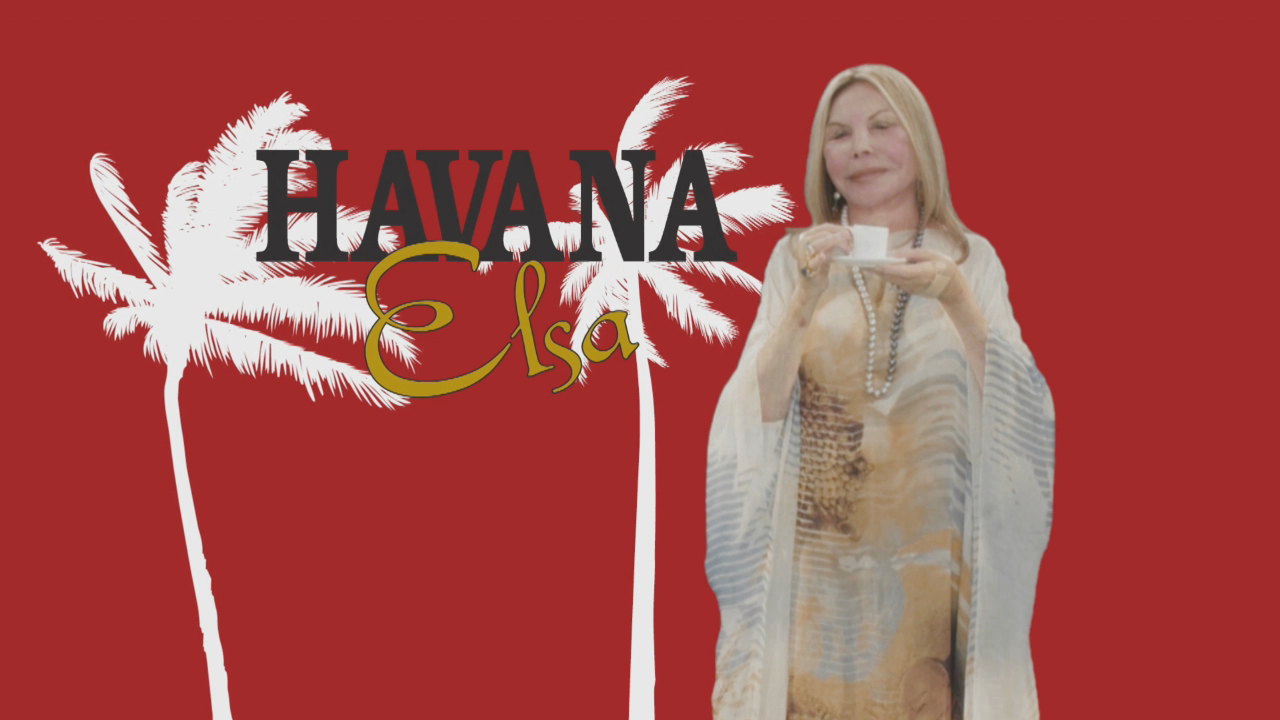