PRAISE THE LORD. . .MY DAUGHTER IS CANCER FREE! Thank you everyone for all of your prayers for my Briana, as God has answered them. Although she is still having some serious side affects from the surgery -- her biopsies turned out benign, which is the best news we could have received. Again, my sincere gratitude and thanks for everyone that has lit a candle for her and prayed for her healing. I am forever blessed and grateful to all of you.

Watching Tamra's divorce become final on this week's episode made me very sad. Watching all the flashbacks of her and Simon when they were married made me realize how fortunate they were to have their family intact and to be happy with one another. When a marriage comes to an end, it not only affects the immediate family, it affects everyone that is close to them. 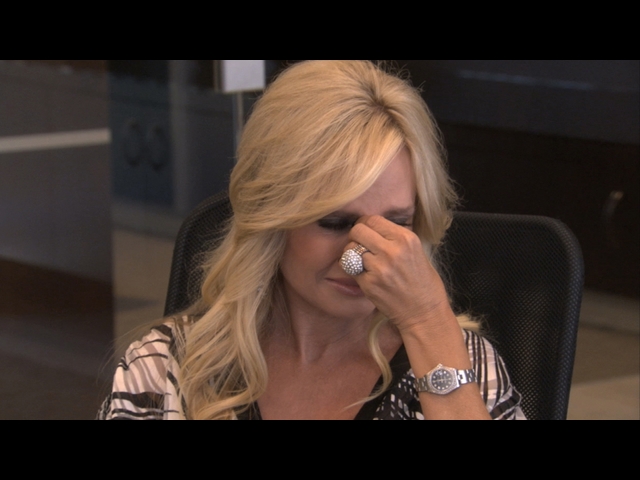 Tamra had a lot of good things to say about learning from her mistakes, because God knows we all have made them in relationships. It's hard to force a relationship to be healthy, when clearly theirs was not towards the end. When she called me to tell me her divorce was final, I could tell from her voice that it was although a sense of closure, it still was something that was very sad and surreal. I wish both Tamra and I were able to sustain happy, healthy marriages, as that is everyone's goal. However those of you that have ever had a divorce, know that sometimes there is no other option.

Watching Gretchen, Tamra and Heather do the mud run was. . ."interesting." Let’s just say I'm glad I didn't do it. Although I believe in supporting charities, a mud run is not something I will ever be doing. I have never been a huge athlete (although I love to be active), and have never ever wanted to run through wet mud. After watching Eddie break his finger and Gretchen "hurt her ankle" (Hmm, did she really hurt it or was it to get out of the run?), staying home that day was probably the best decision for me.

Alexis getting her nose cast off made me cringe. Now that I have officially been told I look like Ms. Piggy and should get a nose job, I think that is something I will not rush and go do. I'm perfectly happy with my nose, and I won't be changing it anytime soon. Now that Alexis' swelling and bruising has gone down, I think she looks fabulous and, most importantly, she is happy with the result.

There has been a little bit of controversy over my dinner date with Brooks. First of all, let me set the record straight: He was not drunk. He was extremely nervous that night and when we were watching it together he was concerned that the viewers were going to think he was slurring his words. He was nervous and that's it.

One of the things I love about Brooks is the love and affirmation he has for me. Although at times I tend to be shy -- especially in public -- he doesn't feel the same way. I am very conservative with PDA (public displays of affection) and am not used to it, so I tend to get very uncomfortable. Donn was the extreme opposite, as I could barely get him to hold my hand. Brooks, on the other hand, always wants to hold hands. Brooks definitely isn't bashful about dating me, and I find it very sweet. At the end of the day, he's an amazing man and we are both learning to "compromise" and give and take in all areas of our relationship to make each other happy.

I had a milestone happen to me last week. . .I turned 50! I can't believe it but I actually am very excited about entering this next decade. I have heard the 50s are the best years so I am going in with a positive outlook in hopes that comes true. Brooks and I just got back from a fabulous cruise on the new ship the Oasis from the RCCL line. We went to Nassau, St. Thomas, and St. Marten. It was a great week at sea, with beautiful weather and lots of rest.

Again, thank you everyone for your amazing emails educating me on thyroid disease as well as your prayers. My families health is my priority and without that we have nothing. Thank you for supporting and watching our show, we are blessed to have such great fans.

In closing, as always please don't hesitate to view my website if you are interested in purchasing life insurance or reading my book More Than a Housewife. Have a great week!