I hope you enjoyed this week's episode as much as I did. I found myself laughing out loud in many situations so I thought I would start with the fun, instead of negativity.

Seeing Heather and Terry discuss her desire to go back to work was very sweet. Terry is an extremely supportive husband and just wants Heather happy. I know how hard it is to be in a career for so long and then having to put it on hold when you have children. I think Heather has this burning desire to do what she is passionate about, which is acting. It has to be hard for her, because having four children under the age of seven is a full time job just in itself. I wish both of them the best in this journey for Heather's future. I know it must be a very tough spot to be in.

When we were all in Las Vegas, we had planned to be at dinner at a specific time in order to be in our seats for Gretchen's performance with the PussyCat Dolls. I had talked to Alexis earlier that evening, and she told me she was having her makeup artist come to her room to do her make-up. We all love having our makeup done by a professional because you can really tell the difference (especially when we see the episodes -- the HD cameras are brutal on my complexion, especially as I have a tendency to get cystic acne which is terribly embarrassing).  I know I feel like my skin looks so much better when I have a professional apply my makeup over when I do it myself. I'm not much of a "primper" and can get ready from start to finish in less than 45 minutes, which sometimes definitely shows when I see myself on camera. . .unfortunately.

I texted Alexis to see where she was and what was taking her so long and she told me what had happened with her make-up. She said her face was close to a grayish/black color and that she had to wash it and start all over again. I didn't understand how that could have happened, but after watching the episode this week there was NO WAY she could have come down looking like she did. I found myself hysterically laughing on how cute Jim and Alexis were when she was getting ready and whispering on how to get the makeup artist out of her room so she could wash her face and start over. 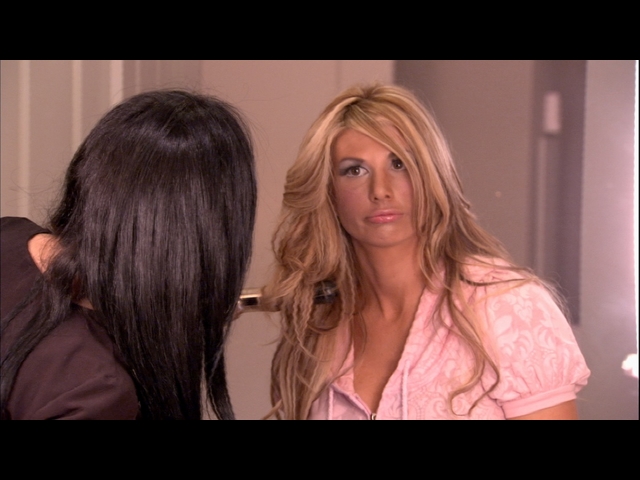 I went to Vegas with the mindset that I wanted to have a good time. I wanted to be the bigger person and show Gretchen that an apology was in order for both of us -- and I was willing to start it. When Gretchen looked back at me like she did, I was embarrassed. Her continued anger towards me about the "deadbeat dad" or "hypocrite" situation is getting old.

As I told her, I am not a hypocrite. I do not condone MEN not supporting their children nor will I ever. I also told her I understand situations where men fall on hard times, and they do whatever they can to pay support, even if it is a reduced amount. I have said this many times. Mike and Briana's father did not consistently provide child support for the majority of their upbringing. I was able to find a career to support us, and although I would have loved to have received child support, I wasn't going to lie down and not support them or myself. In Brooks' situation, he did pay support to his wife, however he was unable to pay the full amount due to a decrease in his salary after the 2008 crash. A hypocrite would condone his behavior and say "YES. . .I totally believe in men not financially supporting their children." I never said that nor would I ever.

Heading out to Vegas, I was in the mindset that I'd rather be platonic then to have this anger festering between us. Obviously she felt different than me and wanted to continue this bickering back and forth by not apologizing back. I feel she and Slade want to focus the negative towards me to mask his issues. I didn't nor do I ever want to fight with either one of them. I decided years ago that Slade's support orders are none of my business, nor do I want to be involved in them. Gretchen is the one this year that decided to reopen that wound, for whatever reason. My dad always told me that "the cream always rises to the top," and if she can't apologize for her actions then that's her choice. I know at the end of the day, an apology goes a long way, and I was very sincere with mine. Looking back, I don't know what I would have done different at Bunko, but I know I shouldn't have yelled at her the way I did. Hindsight, I probably should have just walked out and not even given it "life." It's hard to do that though when the person you love (Brooks) was being completely thrown under the bus and having his character attacked without him being there to defend himself.

A lot of people have emailed me with amazing information about thyroid disease and asking how Briana is doing. I am happy to say this is her first month where her thyroid levels have gotten in the range that was needed. She takes 225mg of synthroid and is finally feeling like herself again. It's been a long haul on this.

Mike is doing great and is still working at Coto Insurance & Financial Services. He is studying for his Property and Casualty exam, which will allow him to be a full service agent. I am very proud of Mike, and it's wonderful being able to work with my son on a daily basis.

Brooks and I will be going to the Kentucky Derby May 2-6, and Mike and his friend Wes from Colorado will be joining us as well. Michael will be playing the Celebrity Poker Tournament for "Backpack for Kids," which is an organization that supplies under privileged children with food for a year for only $80. This will be my second time going to the Oaks and the Derby, as I went last year. This will be Mike's first time and he is really looking forward to meeting those "southern bells" that I’ve told him about. Wow, last time I was there I could not believe the beautiful people in the south.

Thank you all for your amazing support and encouragement. I'm all about plowing through the "ick" in my life and the people that try and throw it in my way. I'm happy and my family is healthy.

Tamra and I are only a few weeks away from our launch date of "Wines by Wives" on May 8. We are so excited to launching our wine membership on a national level. If you are interested in learning more about it, please visit our website at WinesbyWives.com

Last but not least, please don't forget to protect your family with life insurance. For pennies on the dollar, life insurance is one of the only policies that 100 percent of the time will pay out if it is designed correctly. To put it bluntly -- there is a 100 percent chance we will all pass away and if you are the bread winner in your family how would your passing financially affect them? Visit my website at CotoInsurance.com for more information.

Have a great week and don’t forget to smile! It will confuse everyone!