Terry and I Are Not in Trouble

An eight year old boy died senselessly today in Boston, and many others were hurt or killed. Made me want to hold my family closer and love and hug my husband and my babies a little longer. Having said that, RHOC is here to entertain and make us forget reality for a while. I hope you all watched it and escaped for an hour.

Alexis, Vicki, Briana seeing baby Troy. He is TOO cute! Tough conversation talking about Brooks. I guess Alexis doesn't know Vicki and Brianna's back story because she is giving advice to Vicki that's although good advice in my opinion, not particularly sensitive to Briana's position.

Later we see Briana and Vicki in Vicki's office talking about it again. Although I am completely family first, and I would feel the same way as Vicki does to do what's best for my daughter. . .I would hope that my daughter would care enough about me to want me to be happy even if the man is not her choice. 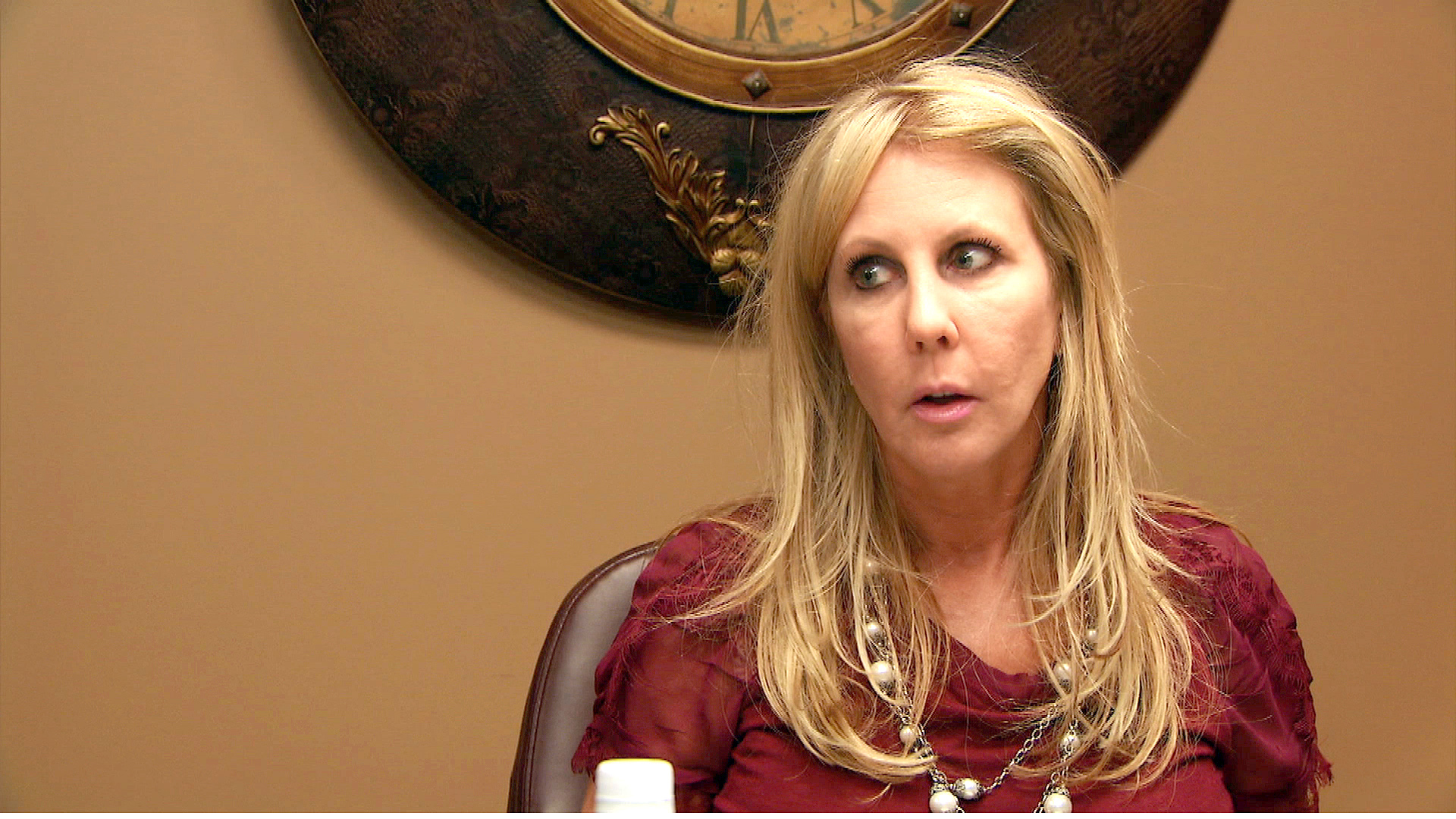 Briana is always a smart, savvy woman. However, in this case -- talking about being the daughter of two divorces -- she is acting like a baby. She is a grown woman, who is married with a baby. Make the right choices for your nuclear family and let your mother have her wings to fly as well.

Terry's office...I love stopping by Terry's office. My cute tennis outfit is from Delano, btw, for all of you that are asking. Implants??? No, not my thing...Not judging anyone, and never say never... Who knows?

I had never heard of Lydia's magazine, however I didn't look down my nose at it. My friend Kacey told me that the McLaughlins were good people. Thats why I took the meeting. Terry and I had no interest in having our house photographed for a magazine.

We asked for the cover because we decided that it would help our local advertising. An inside story would just be a vanity piece that we didn't need at the time. Also, Lisa Vanderpump from RHOBH had recently been on the cover. Sorry, Doug, I love Lisa, but she doesn't match with your explanation of the cover being an international superstar.

As far as Terry goes..I am stopping by his office for 10 minutes. I have very little time to myself during the day. I take the kids to school, hang out with Collette, and when I put her down for a nap, I have two hours to work out, grocery shop, run errands (the housekeeper listens for her when I'm gone, thank goodness!). So, please pay attention to me when I stop by for five minutes! I'm on borrowed time with the baby napping! I don't want to watch you search the Internet on your phone!

Tamra and Gretchen in the baby store wearing matching outfits -- too funny! They are like Laverne and Shirley! Gretchen has been talking about having a baby for some time now -- I hope she realizes that dream soon. Being a mom is the best job in the world.

Lydia!!! When we met I thought she was cute, quirky, and fun! Although I am not a hugger on first meeting I thought it was funny. I'm a New Yorker. We typically don't hug at first introduction. Lydia had great energy and was very sweet. I loved hearing that her mom is a patient of Terry's! Clearly they both have exceptional taste!

When we spoke about the cover -- I was relaying the conversation that Terry and I had. If she had said no, it was no big deal. I didn't want to offend her. I thought the magazine was beautiful, but I was primarily meeting her for my friend Kacey.

When Lydia brings up Alexis she said she had heard my name before. I didn't know what that meant, knowing our recent friendship issues. As far as Alexis' ring goes, it was just funny how it came up - more organically than it looked on the show. It just made me giggle that Lydia kept bringing up Alexis and then said she was wearing a "fake" ring.

Tamra and Vicki are so funny. I loved watching Vicki drive across the street to C.U.T. Fitness. (I'm sure I would do the same.) I'm glad they are rebuilding their friendship.

I have to admit, I was surprised to see Lydia laughing about us asking for the cover. I've been on covers before and Terry and I have been on covers together. No hurt feelings on our end if they didn't want us...But it did hurt my feelings to hear her speak that way about me when I thought we had started a nice friendship.

Our family on Yom Kippur...I love watching the kids. They are so cute -- and look so young! Even from a few months ago!!! (Junk in the trunk. Ha!) I do want Terry to be home more for family dinners and put us first. He is a great father and husband. I just want him to always put family first, as I do.

Mommy jobs ?!?!! Don't even get me started with that one. For all of you out there that think "bringing home the bacon" is enough: it's not. I used to be an equal financial contributor before I had our kids. I work VERY hard (as all stay at home moms do). It should be treated as an important job in the family.

Temple...Terry doesn't understand the day to day handling of the kids. Me suggesting leaving an extra parking space between the cars to unload the kids is standard fare when you are the primary caregiver. It's just easier.

Collette -- oh yes, we have THAT child. Cutest thing ever! Love that baby fiercely! However she can try a saint's patience sometimes! I asked Terry to take her to the back for a few minutes so she could calm down, and he immediately sends her back to me. So I have to stand in the back and miss the service when Terry knows its really important to me to be there.

I get upset when I see some comments that I talk down to my husband, or that our relationship is in trouble. You want me to be phony? This is real life. Tell me you are never annoyed with your spouse. Should I gloss over truth? Suck it up? Pretend it's all OK? This is reality. We all have ebbs and flows in our relationships. Terry and I have been together over 16 years and we are solid. These are normal day-to-day moments in a long relationship.

Vicki, inviting Alexis to party is asking for problems...The last interaction they had was when Alexis was threatening to sue Tamra. As for me...read the previous week's blog to understand my mindset. This will be an episode not to be missed...

You can also follow my onion ring loving husband on Twitter @drdubrow. Or check him out at: DrDubrow.com