On Slade and Lauri's Poor Timing

First of all, Happy Canada Day! I know everyone will be celebrating the Fourth of July this week. Nothing beats fireworks, family, and freedom. Yay America! A little known fact though, July 1st is Canada Day so pour some maple syrup on your pancakes, eh? On to this week's episode. . .

Who doesn't love a day of dress shopping with all of your girlfriends, right!? I was so excited to watch Tamra try on all sorts of dresses and find the wedding gown of her dreams. Doug and I just went to her wedding a couple of weekend's ago so, it was perfect timing to watch this episode. Tamra looked beautiful in every dress she tried on. It's no wonder she choose three! (You can see all of Tamra and Eddie's wedding day bliss in September in a multi-episode special all about their big day.)

Anyway, this was the first time I'd see everyone since the Salsa Night. So on the drive up to LA, the girls asked me all about Slade's now infamous "cheeseburger" comment. Some fans have commented that they think I overreacted, and they are entitled to their opinions. However, my feelings were hurt by Slade's whispered "joke." That is my reality. I am a direct person and I told him right then and there that it is never OK for a man to put down a woman's appearance. End of story. Slade should have just said sorry and moved on, but that didn't happen, and instead it grew into more then his mere comment. It was validating to hear that the girls understood where I was coming from and affirm my feelings. I felt really supported and justified by my friends.

When Gretchen got into the limo, all I saw was a big, honking diamond ring! I was blinded by bling! I thought Slade had proposed! The second I saw it, I asked her about it. I'm not sure why she decided to wear her old engagement ring -- on her left hand -- on Tamra's day, but it's not really that big of a deal to me. If I were Tamra, I may have been a little annoyed, but I don't really have a dog in this race so I have no real comment. That said, I am curious about Gretchen's reasoning.

Seeing Heather and Alexis getting along and talking made me so happy! Finally, we are one big, happy family celebrating Tamra together. Then Lauri had to chime in!

Watching this scene back is so crazy. In my opinion, if Lauri really felt that Vicki needed to hear what she knew about Brooks, Lauri should have called or taken Vicki aside. Instead she just dropped the bomb in front of all of us. My heart broke for Vicki. I don't think Lauri's intentions were bad, but Vicki's response was real and honest and it was so hard to see my friend in pain.

Once the shopping was over, we all went to dinner where NONE of us ate placenta, thank you very much! TMI!

When the subject of Gretchen's lying came up, I felt uncomfortable. It's no secret that Gretchen and I haven't been able to become best friends, but why are we talking about her, especially since she wasn't there to give her side of the story. It seemed wrong to be speculating behind her back especially since Gretchen DID come wedding dress shopping, and made the right decision. 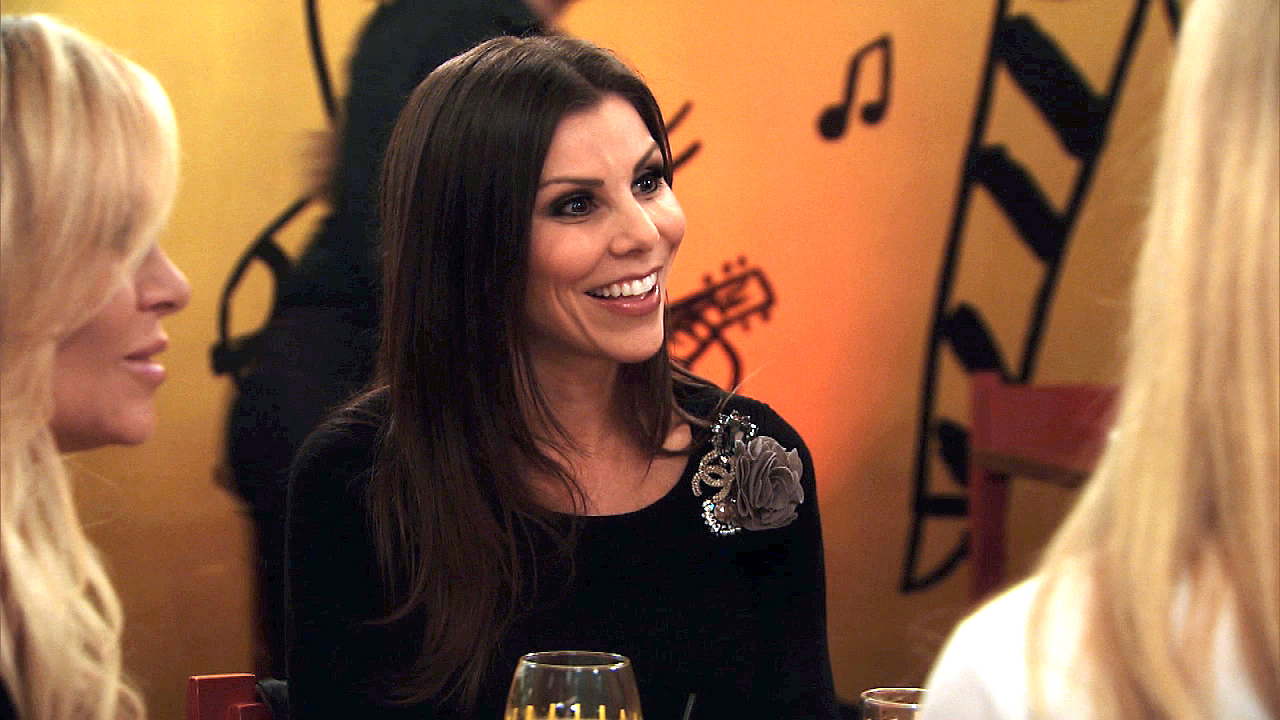 In the good news department, I was really excited for Heather and her role on Malibu Country. I know it's Heather's dream to be a working actress and I love seeing it becoming a reality for her. Heather is so talented and this role sounds like it could open even more doors for her. At dinner, we should have been celebrating for all these wonderful things happening in our lives.

Be sure to watch next week for our trip to Canada. I show the ladies my motherland!