Sign Up for Free to View
Karen Huger Says She’s the True Grande Dame of Potomac, Not Charrisse Jackson-Jordan 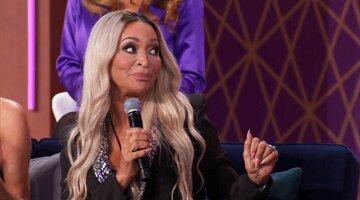 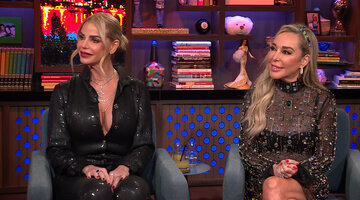 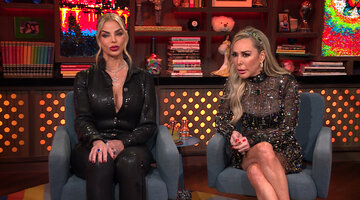 The crown may be heavy, but The Real Housewives of Potomac’s grande dame Karen Huger has no intention of abdicating her throne. After Robyn Dixon suggested on RHOP Season 7 that friend Charrisse Jackson-Jordan might actually be “the real grande dame” since she was the group’s original connector, Karen had something to say about it during BravoCon 2022.

While taping an episode of Watch What Happens Live with Andy Cohen, which aired on Wednesday, October 19, Karen reminded everyone that her grande dame title was hardly self-appointed. “Thank you guys for it, because it’s because of you,” she told the crowd of BravoCon attendees, adding, “If she were the grande dame, she’d be the grande dame. She is not, and I am. And that’s it.”

Karen didn’t stop there though. “In all transparency, as you watch this season, [Charrisse] and I have not been friends for five years,” she explained. “So, for you to come in my circle of friends and demand that we be friends now because the cameras are rolling, that’s a nah-nah-nah-nah-nah for me.”

Still feeling hotter than a three-wick candle, Karen also threw shade at Robyn’s “loyalty to Charrisse,” which she said made “no sense” to her: “Robyn hadn’t had a voice for six years. I just heard her speak this year, and all of a sudden, it’s cheerleading someone that was fired from the show and is now a friend.”

Perhaps proving the grande dame’s point, fellow WWHL guests Brandi Glanville and Erika Jayne had both chimed in earlier to ask, “Who is Charrisse?”

The RHOP Ladies Pop Bottles, Serve Looks, and (Probably) Get Shady in These Season 7 Photos

While addressing her rocky relationship with Charrisse in a separate interview earlier in the month, Karen took a similar “I don’t know her” tact. “Who?” she joked to Entertainment Tonight when the RHOP OG’s name came up. “When you bring old dust bunnies around, recycling old dust bunny news, you’re going to get old news, you know?”

As for Robyn’s assertion that Charrisse deserves the grande dame title, Karen added, “It’s silly to me.”

Life is better as an Insider
Bravo Insider is your VIP pass to never-before-seen content, exclusive giveaways, and so much more!
Sign Up for Free
All Posts About
Charrisse Jackson-Jordan
Karen Huger
Robyn Dixon
BravoCon 2022
Related
The Daily Dish