Candiace Dillard: I Will Not Beg Anyone to Befriend Me 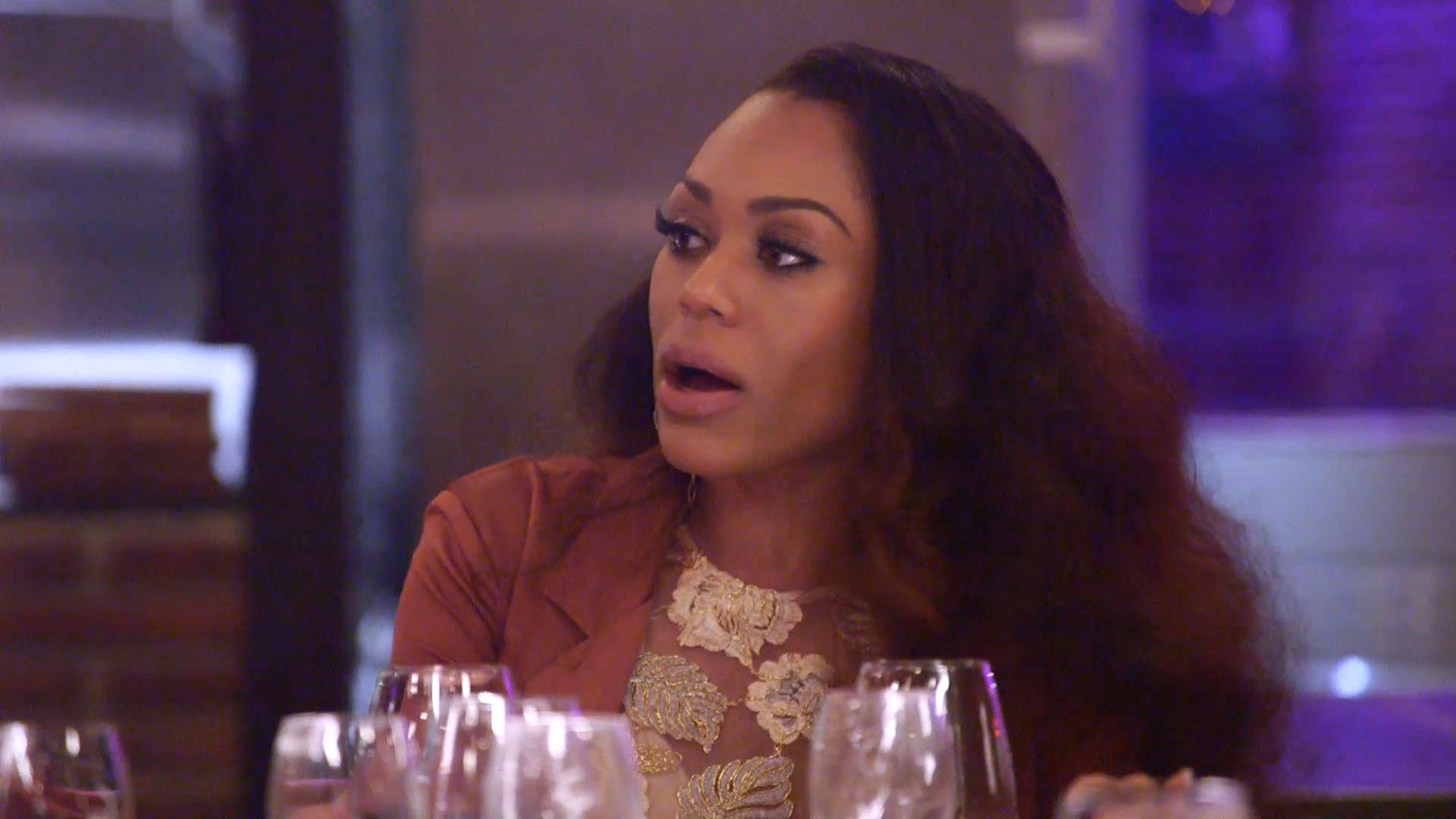 Bravotv.com: What were you thinking when Gizelle Bryant said that she toldRobyn Dixon that the ladies wanted to leave her?

Candiace Dillard: At this point, nothing foul, foolish or messy that Gizelle does surprises me. If there’s an opportunity to spread fairytales and fallacies across the nations, she already has the t-shirt, the keychain, and the certification. And of course, Robyn believes her. It’s like Groundhog Day with tacky clothes.

Bravotv.com: What do you think about Karen Huger’s reaction to your singing?

CD: Second, to sparing withAshley Darby, annoying Karen with my singing is my new favorite past time! It’s just so entertaining because much like my random song bursts, her reaction is so extra! It has me and the other girls in stitches and brings some much needed comic relief.

Bravotv.com: What were you thinking whenCharrisse Jackson Jordan said it actually was her who invited Kyndall around first? What do you think of this Kyndall situation?
CD: I’ve said before and I’ll say again: Kyndall’s presence in this collective of women is too much. It looks, sounds and smells messy. As much as I am shaking my head at Charrisse for knowingly bringing Kyndall around, let us not turn our heads away from the subject of all this animosity. Kyndall is a grown woman with a full brain and (one would think) common sense. She HAD to know her presence would be contentious and ruffle feathers. She chose to come around anyway. In my opinion, it is she who looks the most in need of a glass of water because she made the decision to hang around despite the drama she knew could ensue. If I were her, this group of friends (as a collective) would be the last place I’d be caught dead keekeeing because it just looks so bad! I am no one’s pawn and would never allow myself to be used for someone’s petty 6th-grade revenge. They all need to do better.
Bravotv.com: Tell us about opening up to the group about how you were hurt when everyone laughed? How did you take Monique Samuels’s apology?
CD: The more I get to know some of these women, the less interested I am in getting to know them. I don’t need and will not beg anyone to befriend me. Especially when I know my worth and how valuable my friendship is. The way they behaved is very telling. It’s a show of character and the lack of tact is beneath me. Watching Monique sit and laugh at me with a person who has treated her with such bold disregard is also telling. I received her apology but I don’t forget easily.
Bravotv.com: How were you feeling when you broke down at lunch with Karen and Charrisse as they were telling you how you come off to the group? Explain where you were at this moment.
CD: The part that made me the most emotional was when Karen spoke about there being so much more to me than what I had divulged to the group thus far. Why? Because I KNOW THAT. I know exactly how amazing I am. I know what kind of friend I am. What kind of woman I am. And one of the most frustrating things in the world is not being given the space or opportunity to show those things. I don’t regret what I led with coming into this group: I am incredibly proud of my accomplishments as a national titleholder (and yes, that does make me famous...in and of itself and moreso than someone living in the shadow of a famous husband), as a businesswoman, an artist and the miniature mogul I am becoming. I’ve done more in my life than some of these women have done in almost double the time. That’s just facts. Coming out of that lunch with Charrisse and Karen, I felt better having gotten my feelings off my chest but I’m still learning to navigate and trust.

Candiace Didn't Invite One RHOP Pal to Her Wedding

You Have to See Robyn Dixon's Drastically Shorter Haircut