Chris hit the nail on the head this episode: What happens in Vegas really will end up on national TV. Before this episode, I'd never been to a pool party in fact, somehow, I wasn't even conceptually familiar with the idea of a pool party until I arrived at the Cosmopolitan at the beginning of this season's shoot and found out that my room, beautiful and spacious as it was, directly overlooked the hotel's Boulevard Pool. As I was settling in on my very first day, one of these parties was just kicking off, and I was so anthropologically intrigued by this riotous daytime party that I shot video on my phone and sent it (along with some exclamation points) to my beloved bunch of Saveur editors back in New York. Little did I know that just a few weeks later I'd be attending a party at the very same place. 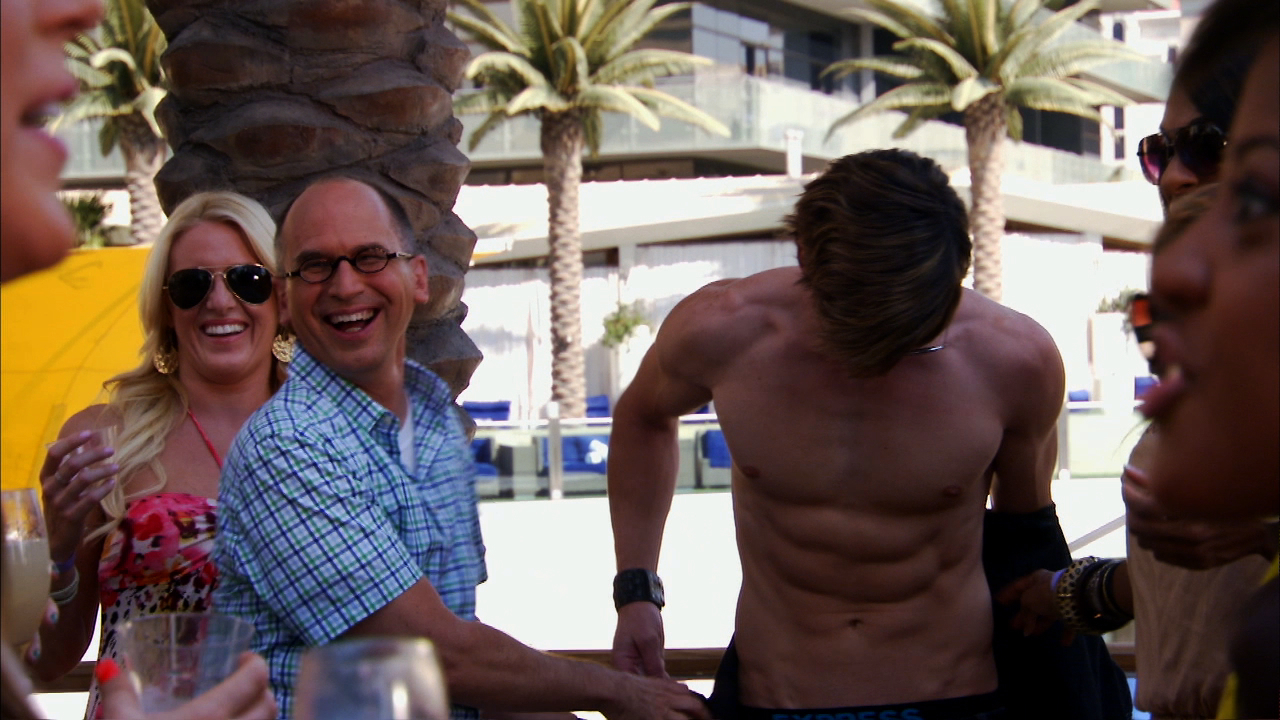 So I think my general lack of pool party experience serves as some excuse for behaving like a kid in a candy store a candy store that I hadn't even known existed before that week. With young men all over the place, some of them still wearing shirts that were an affront to their youthful, gym-toned abs, my actions made complete sense. A push-up contest with Cash and Amen seemed like the most natural idea in the world. I regret nothing.Once all the shirts were off that needed to be off (and others, like my own, remained firmly on), it was time to eat. At this point in the season all seven of the remaining chefs had hit their stride: there was a clarity and confidence in even the least successful dishes that was really sensational. To me as a critic it was a gratifying thing to experience: each plate hit flavor and textural notes that were precisely what I wanted to be eating. (I wish Ruth had been around for this episode: she's the other critic who's been with all these chefs through every previous episode; I'm sure she would have found this round of dishes just as rewarding as I did.)

Even so, while at this point in the game it may be splitting hairs to find each elimination's winner, this week's weak points made themselves fairly clear. Patricia's pulled-pork-that-wasn't hit me doubly hard: chopped and oddly textured, it didn't live up to its tantalizing description; and on top of that, because Patricia has proven herself to be such an exquisitely talented chef thus far, my expectations were already incredibly high. Instead we got something that was like the airline-food version of great barbecue, lacking dimension, depth, and that electric deliciousness that great pulled pork brings with it. Patricia seemed to really be feeling the pressure this episode, neither of her dishes performing well at all. I want to see her get her fire back: she's one of the most gifted cooks I've had the pleasure to be in the presence of, and when she's good, she'sexcellent. Her off-kilter performance this episode was worrying.Chris' dish was ambitious and inventive, as is almost everything he produces, but it suffered slightly thanks to its serving size. A textural mish-mosh with crisp watermelon, chewy tuna, and firm tomato, it was best appreciated eaten in only one bite. The initial rush of watermelon was entirely eclipsed by the smoky, peppery tuna, and the tomato was entirely lost. It was a very smart idea, but in this context it didn't quite pan out.

But of the three least-favorite dishes, Thierry's croque madame was the clear low point. For me, the sandwich's most egregious sin wasn't the lack of a fried egg on top, or even the gooey bechamel; rather, it was the simple fact that the toast was burned. Nobody likes that charred, carbon flavor, its bitterness overpowers everything. I was disappointed to see Thierry go he'll be sorely missed, he provided for this group of chefs a certain centeredness, and I worry about what will happen to their dynamic in his absence.

As for the four top dishes this episode, they were all truly splendid. There was hardly a flaw among them, but Lorena's buuelos had something so soul-satisfyingly gorgeous about them, such a perfect mouthfeel, that I had a visceral response of pleasure. (And her radiance when she won! My God, she exuded such pure, unadulterated joy that I almost cried.) Her win was a wonderful validation for her cooking: clean, bright, festive, and ultimately imbued with a great sense of passion and fun. Just like a perfect pool party, I found out.