Save for the occasional open kitchen, it's rare for the average diner to see chefs at work. The pre-shift shots, the arguments over mise en place, or the poor stagier getting yelled at while he's crying over a pile of peeled onions -- that's all behind-the-scenes stuff. What we know of a restaurant is the dimly-lit dining room, the friendly wait staff, the dreamy Italian sommelier, and of course, the cooking. You might think you know what it's like back there because you saw a “celebrity chef” doing a demo they did on the Today show, but just let me tell you, it's a war zone. And this episode gave us a front row seat to the show.

Judging this challenge was fascinating. Seeing the chefs' styles juxtaposed against each other in the ring gave me a deeper understanding of how they work, who they are, and their culinary perspective. It's always been my contention that how people compose themselves under pressure says a lot about their character. This episode was no exception.

Preview
Knife to Knife in the Ring 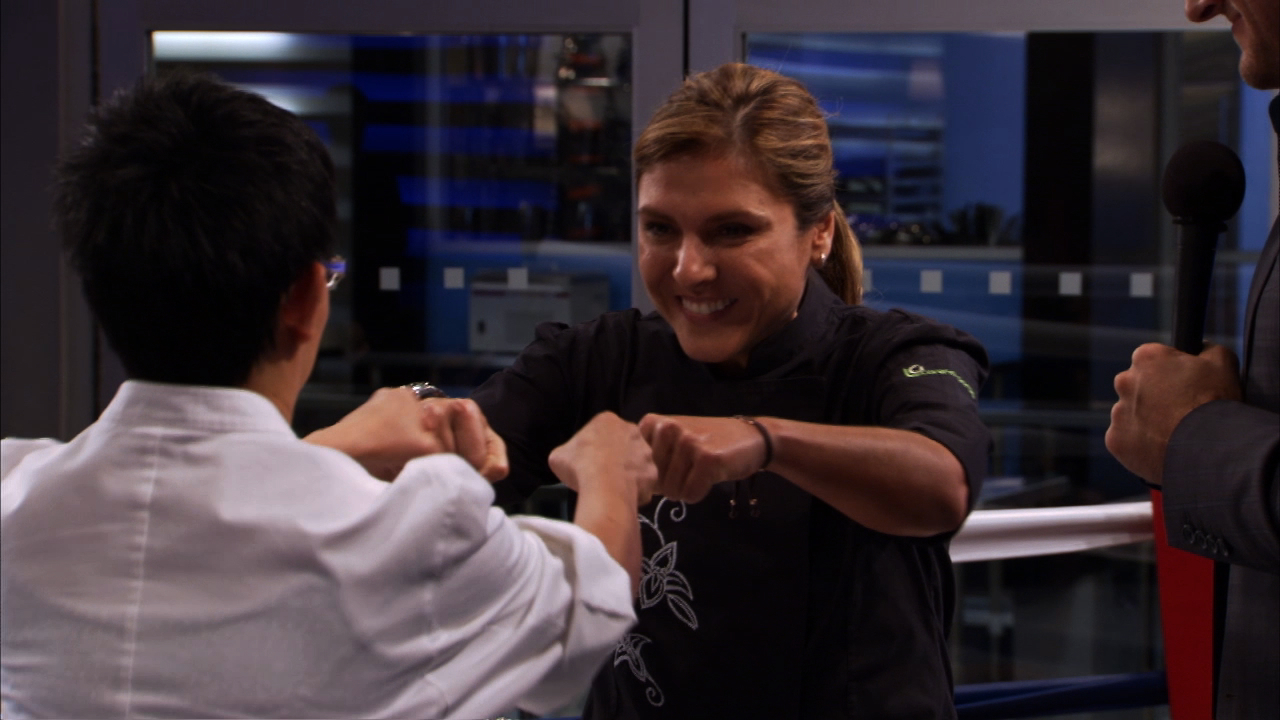 There was Patricia, methodical and poised with her knife work, set up against Lorena, a Latina version of a whirling dervish, slashing and slicing with such great vigor (and volume), but somehow pulling off multiple ambitious dishes in the 11th hour. Then there's Chris, who somehow managed to bust out a silken zabaglione in a matter of minutes. He's the guy you'd want around in a nuclear crisis -– resourceful, methodical, and strong-willed in his execution. On the other side was Takashi, who despite his depth of talent seemed to be blinded by the bright lights of the stadium. For the first time in the season, he was really hamming it up for the crowd. And perhaps that's what got him distracted. So much so, that he forgot to portion enough for the judges in his first round. But it revealed a lighthearted side that I hadn't seen before, one that was totally endearing.And along with all of this open kitchen/boxing ring action, I got to sit next to Kerry. Not Kerry the chef, but Kerry the dad, Kerry the man. Because the chefs are sort of sequestered from us all season, this was the first bread I'd broken with a Master. We went through the play by play and what he would have done if he were competing. (He was really glad he wasn't at the time.)

At the crux of the drama discussed, of course, were Patricia and Lorena. The claws really came out in the kitchen, and it's a shame that the two female chefs don't seem to see eye to eye. Women in this industry have to deal with a lot of macho nonsense, and I wish that we could band together instead of butting heads. It didn't seem to harsh their dishes though; in the end it was Takashi that had to go.

I remember having a conversation with Jane Goldman after the meal, saying that Takashi's dish just needed some editing. There seemed to be too many flavors on one plate, which is not characteristic of the classic, clean chef. What's important to me is that Takashi went out having fun and entertaining the crowd. His family will be proud. And it sure was fun to watch.