Mama Said Knock You Out

Welcome back my little prize fighters. This recap is brought to you by the word "yuzu." What an episode, huh? I know I’ve probably written this in every recap I’ve written so far this season, but I think every episode is better than the last. This week’s episode started with a mise en place relay race -– my favorite of all the Quickfire Challenges. This time around the chefs had to crack eggs, shave cheese, and filet beef into perfect pieces weighing between 7.5 and 8.5 ounces. Lorena is particularly worried about this challenge, and I gotta say, I’m kinda worried for her. Chris, a possible frontrunner (at least in his mind), makes his filets too small and is immediately given the boot. As is Patricia. Takashi, the cutest man to ever grace this Earth, moves on. As does Kerry, leaving Lorena behind, but not disqualified. Kerry and Takashi move on to cook against each other with those mise en place ingredients. I watched this Quickfire Challenge hungry, which is always a mistake, and I have to say I wanted to dive into Takashi’s dish. I’m a sucker for a grilled vegetable, but Kerry was victorious! He dethroned the Immunity King! Kudos, Kerry.

Preview
Salt in an Open Wound 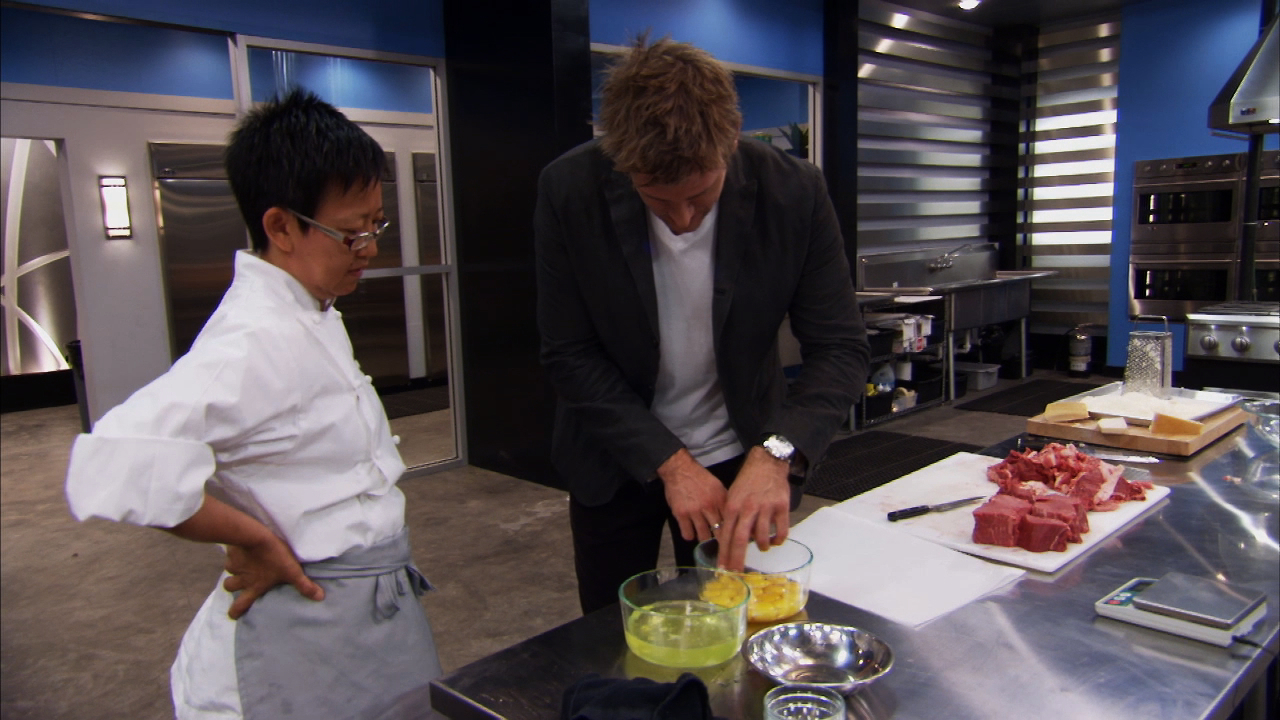 With his win, he sat out the Elimination Challenge which was…

LET'S GET READY TO SAUTEEEEE!The first challenge is Chris vs. Takashi. Am I the only one who wished 50 Cent and Justin Bieber were there to walk the chefs in? Probably. Back to the challenge. The ingredient? Bacon! Everything is better with bacon. The two chefs help each other throughout the challenge when the other struggles, and I wonder if I would have done the same. I’d love to say yes, but who knows. In the end, Chris’ play on a Mexican breakfast wins over Takashi's dish. Chris will compete for the challenge win, leaving Takashi to cook again to just stay in the competition.

Next up is Lorena vs. Patricia. Patricia has made some pretty harsh comments this episode. While there were tense moments the last few episodes between these two, Patricia flat out questioned Lorena’s palate and knife skills -- them’s fightin’ words, and I kinda thought they were low blows. These two are just like oil and water -- I don’t think they'll be opening up a restaurant together any time soon. They too had to compete with bacon. And although Patricia finished first, even cleaning her station, Lorena won! This probably had to hurt Patricia. So Lorena is on to compete for the title and Patricia will eventually compete against Takashi to save herself.

Next, we move on to Chris versus Lorena, and it seems everyone is cheering for Chris, but this time the ingredient is sugar! And everyone got worried. There has to be a savory dish that could've been made right? Tomato sauce? Something? Either way, both chefs went the dessert direction. Chris made a simple zabaglione and Lorena made chocolate cakes and grilled pineapple. I prefer fruit in my desserts -- I've never been a fan of soufflé or molten chocolate anything, so I would’ve loved Chris’ dish and half of Lorena’s. Again, Lorena wins! And we give her maybe the gaudiest belt known to man. Way to go, Lorena. You are our heavyweight champion!So, now it’s time for Takashi and Patricia to fight for their lives. The ingredient? Chicken liver. I’ve never been a fan of liver, but I've also never had it cooked by a Master. Takashi has some trouble with his and, unfortunately, he is eliminated. I’m really going to miss Takashi. He was just such a pleasure to watch, and it was so nice to see how much the other chefs respected him. Farewell, Takashi-san.

Until next week, Have a Nosh!