Hello, my little gabbas. Yes, I now know that those little monsters are called gabbas, which I did not now before. You see, I was always a little scared of Yo Gabba Gabba! I'd watch with my nieces because they loved it, but I, as their much, much older aunt, was scared. As I mentioned in my recap for our awesome Muppets episode on Top Chef, personified monsters scare me. Yes, I'm 30. I've never seen E.T. It seems Clementine Acheson has the same issue. She is not 30. But I have to say, those little critters really grew on me this episode... if for no other reaso than they caused Sang Yoon to do this:

And Franis Lam to do this:

Before all the gabb-ing, though, it was adult time with a Quickfire celebrating rom-coms with Ms. Mindy Kaling. Each chef had to create a dish inspired by one of Mindy's favorite romantic comedies. Why The Holiday was not on her list, i will never know. You lose points for that in my book, Mindy. Some of the chefs weren't entirely familiar with their designated films, but David Burke was. If you'll remember, he also knew a bit about Days of Our Lives, revealed at the chefs' soap opera challenge. Needless to say, my affinity for David Burke grows every week.

As Mindy and Curtis walkd around, tasting the dishes, each chef provided an explanation for his/her dish, and for some reason the only dish I was worried about was Jennifer's just because she seemed to be the least familiar with her film, so she took the title at face value. Foruntately, she pulled through. Bryan's dish seemed as thoughtful as it always does. He even got to name-check Yale. Well, excuse us! He didn't end up in the top or bottom, though. Quickfires are just not Bryan's thing. Ultimately, Doug won with his scrambled eggs and caviar with pommes frites. He also shared a flirty moment with Mindy… and Curtis. Sang is not impressed by Doug's eggs, but if I've learned anything as a faithful Top Chef fan, perfectly-cooked eggs are always a good thing. And as Mindy said, what's sexier than eggs and caviar? Not much. If you can describe a food as "silken," it's probably a safe bet.

So, Doug's charity wins $5K! It goes to the dogs, literally.On to that Yo Gabba Gabba! challenge we mentioned earlier. In come the gabbas. I'm a little scared, but I'll get through it. The chefs reactions are nothing short of amazing. The parents in the crowd recognize the guests, while others just look kinda, well, as scared as I am. Curtis presents the challenge: to create healthy dishes that both kids and adults can enjoy… using ingredients kids usually don't enjoy. We've done variations on this challenge before, but I must say I'm nervous for this particular group of chefs cooking for kids. They seem to be as well. Whenever any of our chefs cook for kids, we usually get such great opinions from the chefs about children in general. And this episode was no difference. Sang admits he's known for his inflexibility. You don't saaaaay. Douglas admits he's more comfortable with dogs, and after basically playing fetch with a child later, I can see why. Like, where did that ball come from? I have a feeling Douglas just walks around with one in his pocket, in case a dog is nearby! As scared as the chefs are about the challenge, they are told they'll be cooking for the Boys and Girls Club, and Sang let's out a sigh of relief, which makes me like him more than i did before. The man has a heart, everyone!

The chefs whose sous chefs didn't fare so well in the last Battle of the Sous Chefs -- Jennifer's, Neal's, and Sue's are hit with two disadvantages. One, they have to execute without the help of their sous chefs. And secondly, they have to incorporate Brussels sprouts into their dishes. I don't know about you, but I didn't start eating Brussels sprouts until I was older, not because I didn't like them, but i was never offered them as a child. I love them so much now that I wonder if I would've liked them when I was younger. I guess I'll never know!

The chefs seemed to take two different approaches to the dishes: some tried to create can't-lose kid dishes -- mac 'n' cheese, pasta with meat sauce -- and work their undesirable elements in, maybe even mask them. Others -- namely Doug and Bryan -- riffed off kid-friendly foods -- Jell-O, ice cream -- but made their respective undesirable ingredient the star of the dishes. Interestingly enough, the results were mixed, even among the two approaches. In the top we had Neal, Sang, and Doug. Doug's dish was unquestionably the most daring. Eggplant jello?! This could have had both flavor and texture issues for the children… and most adults I know. But somehow, it worked. It was savory. Doug and his fellow top chefs were as surprised as he was. Ultimately, though Neal won with his pasta dish. I think he could have taken this dish even a bit further health-wise by using a non-white pasta and making turkey meatballs. Either way, ya done good, Neal.

In the bottom is Bryan, Sue, and Jenn. At first, I was confused as to why Bryan was on the bottom. It seemed he essentially did the same thing Douglas did. The only problem is that Doug's apparently tasted better. But in my mind, Bryan not only thought about his dish from a flavor perspective, but he put on a show. That man loves a dome, and so too did the kids. If I saw my food smoke and crackle like that when I was little, I would've been floored. It's like a meal and a magic show in one! No two-drink minimum! Alas, even though his dish tasted like "dirt," Bryan goes through. Not that I have any business making suggestions, but beets go well with chocolate. Dark chocolate is good for you. That's all I'm sayin'. Sue and Jennifer, on the other hand, didn't make it through. Sue's mac 'n' cheese seemed like a no-brainer, and her use of cottage cheese seemed successful. Unfortunately, she added bacon, and didn't incorporate the Brussels sprouts well. Kids were apparently picking them out. Jennifer's dish set an expatiation for the kids of an ice cream sandwich. That's not what they got. Even Curtis admitted melon and Brussels are a hard combo, and Jenn just didn't figure it out.But wait! It ain't over yet! Sue and Jenn are both fighting it out for redemption in the latest episode of Battle of the Sous Chefs. One of them will return to the competition. So, watch HERE.

Also, if U may offer one of this week's unseen clips -- Yo Gabba Gabba's creator talks about the origin of "There's a Party in my Tummy." It's actually quite fascinating.

Exclusive
It's a Party with Yo Gabba Gabba! 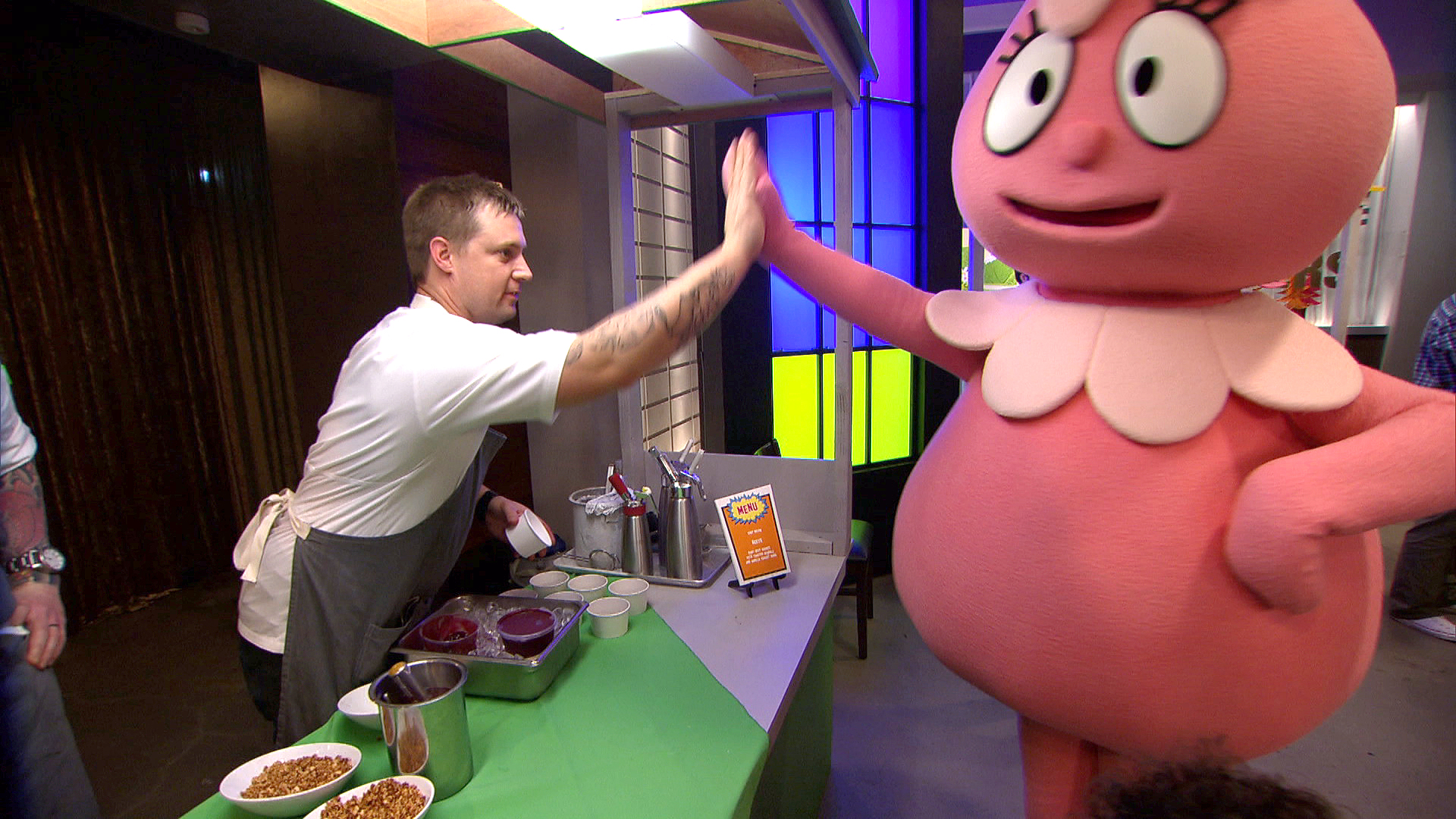 Until next week, Have a Nosh! Also, I'm recapping Padma's Picks every week over here, so read my take on Episode 1 HERE, won't ya?