Pranks for the Memories

Hello! This is Lindsey, Associate Producer, reporting from the Bravo Clubhouse. My how this week started off with a dramatic bang! Between the RHONJ reunion Sunday, the RHONY reunion Monday, and none other than Jill Zarin in the clubhouse Monday night, sh*t was getting REAL.

Let’s just talk about the Jill episode for a hot minute. I knew the instant she arrived because I heard Ginger barking in the lobby and Jill’s familiar voice floating through the office. Moments later she strolled by my desk with Bobby and Ginger. My first thought was, wow, Jill looks amazing! Not that she didn’t look good before, but damn, those liquid facelifts have paid off.

After my initial gut reaction, my mind exploded with questions…What does she think of the new cast? Does she feel awkward being here now that she’s not a Housewife? How is she going to react to our questions? What questions is she going to ask Andy? As it turns out, Andy and Jill had a respectful conversation, and were able to ask and answer the questions all RHONY fans wanted to know. No drinks were thrown, no tables were flipped, but holy moly was it ever an entertaining episode to watch.

So, just to recap Sunday and Monday: Stripper accusations flew, #ToasterGate was revisited and Jill skweez’d Andy for answers on why she was fired.

Let’s all take a deep breath in aaand out. Phew!

The only time my heart rate slowed during this 48 hour whirlwind, was when Mario Lopez put his adorably deep dimples On Display for us in the Clubhouse.

By Tuesday night, I thought we had sailed on to calmer waters. LuAnn de Lesseps and Lauren Conrad were in the house for a night of fashion forward fun. LuAnn was showing no Thomas related stress as she pinned the tail on the pirate and even donned a Ramona eye patch.

I was laughing at the hilarity of it all, but little did I know, the most outrageous moment of the week was just minutes away…

Quick detour: Three other ladies and I take turns answering the viewer phone calls that come in each show.  It’s quite an adrenaline rush, because we have a limited number of phone lines, and tons of great callers dialing in throughout the show. It’s fun to talk to people from all over the country and hear their opinions on different Bravo related drama. Sometimes, people call in and just want to chat. Believe me, I’d love to dish about every jab that was made during the RHONJ and RHONY reunions, but the reality is WWHL is a 30 minute live show, so I have to barrel my way through the calls. We always ask the caller what his/her question is before it’s asked live. Mostly, because we don’t want someone to ask a question that was already asked. However, sometimes callers change their minds about what question they want to ask on the fly.

Never was this more apparent than Tuesday night during the After Show.

I had 6 callers ready to ask questions. The caller lined up wanted to ask Lauren Conrad a simple fashion question. But, as you may or may not have heard, that is NOT what the caller decided to ask. This mystery woman from Pennsylvania starts out by complimenting the ladies on how wonderful they look. (Cool, everything going great so far.) Next, she tells Andy she has a message for him. (OK, kind of strange…) Then, she proceeds to shriek, “Drop Dead Mother F***er!!!” and hang up. (Ummmm WHAT???)

I’m not going to lie, I felt betrayed! I thought this woman and I had bonded over our short Lauren Conrad conversation. Alas, she had other plans. Just like Alex McCord in Season 3 of RHONY, this woman had a message to deliver.

Andy on the other hand was intrigued, and wanted to chat further with this mystery caller. Realizing she had hung up and not stuck around to discuss further, Andy looked into his camera and gave it right back to this “messenger."

The whole thing was shocking and hilarious all in one. Turns out, the drama did not end when Jill and Ginger Zarin left the building. Tuesday night, we really Watched What Happened Live.

Check out all the hijinks for yourself here (craziness commences at the 3:30 mark) 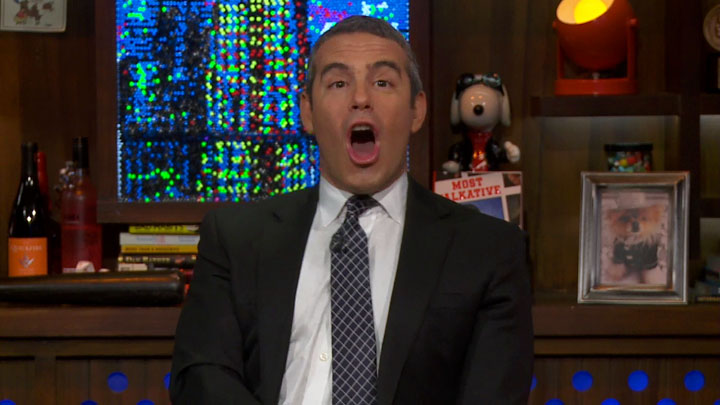 3 Things We Learned from Last Week's #WWHL After Show

‘Tis the End of the Eighth Season

7 years ago
See All Posts
Latest Videos
After Show

Margaret Josephs on Teresa Giudice’s Involvement in the Hair Pull

9 hours ago
See All Clips