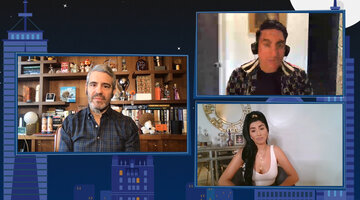 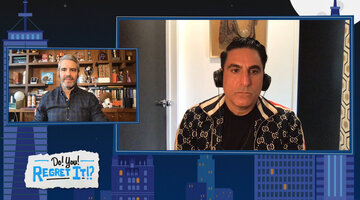 Things between Destiney Rose and Sara Jeihooni's brother Sam turned out to be more than just a Sin City hookup. After first meeting in Las Vegas earlier this season of Shahs of Sunset, Destiney and Sam kept in touch and had been seeing each other for about two months, we learned in the April 10 episode.

Unfortunately, Destiney's grand romantic gesture of a beautiful dinner and a hotel room stay for Sam's birthday didn't exactly go as planned. After an extremely confusing and cringeworthy meal, Destiney decided to dip out on the celebration early, packing up her stuff and leaving the hotel. "Sam and I are no longer talking," Destiney said in an interview during the April 10 episode of Shahs of Sunset. "Blessings on blessings."

And that's where things still stand between Destiney and Sam today, in case you were wondering. When a fan asked via Andy Cohen during the Watch What Happens Live with Andy Cohen: @ Home After Show on April 10 if Destiney was still seeing Sam, Reza Farahan couldn't help but jump to answer for his friend. "After what he did? Are you kidding me?" he said in the above clip.

Destiney then confirmed, "Do you think I would want to speak to someone after that?"

Fans had a lot of questions for Destiney about her relationship with Sam during the night, including one viewer who asked, "Destiney, why do you act like screwing a friend's brother, when you know the friend isn't cool with it, is not breaking the Girl Code? It's no wonder Sara doesn't like you."

Reza Farahan on His Behavior at the Pool Party

"Well, first of all, I'm glad she doesn't like me. That's her issue, not mine," Destiney replied on WWHL: @ Home. "Second of all, she's not a friend. You don't owe someone who's not a friend anything. Keep it pushing, boo."

Reza backed Destiney up, saying that she and Sara were introduced at practically the same time she met Sam in Las Vegas. "In Destiney's defense, I had literally five minutes before introducing Destiney and Sara. They didn't know each other like that," Reza explained. "She knew Sara almost the same amount of time she knew the brother."

Even though things didn't work out too well for Destiney and Sam, Reza said that he has no regrets when it comes to encouraging their romance. "Destiney is my sexy, fun lady friend that was having a little bit of an itch. We were in Las Vegas. She was having a good time," he said on WWHL: @ Home (clip below). "I didn't realize it was gonna be all this drama over just some fun."

Does Reza Farahan Regret the Restraining Order Against Tommy?

See what's coming up on Shahs, below.

Next on Shahs: Reza Farahan's Husband Makes a "Naked Jenga" Confession
Life is better as an Insider
Bravo Insider is your VIP pass to never-before-seen content, exclusive giveaways, and so much more!
Sign Up for Free
All Posts About
Andy Cohen
Destiney Rose
Reza Farahan
Sara Jeihooni
Shahs of Sunset
Hookups
Bravo Relationships
Related

This Is What Destiney Rose Thinks of MJ and Reza's Drama

Destiney Gives an Update on Her Relationship with Ali