Now Playing
7:29
Preview
Chief Stew Natasha Webb Says this Conversation with Captain Sandy Was "Like a Kick in the Stomach" 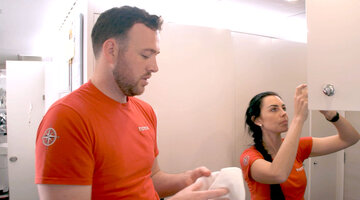 2:21
Preview
Natalya Scudder Thinks Kyle and Natasha Are Being "Selfish" and "Trying to Act Like Martyrs" 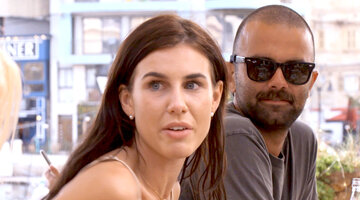 In the history of Below Deck, we have seen that a crew’s night off often leads to drunkenness and drama. But when the crew is offered a night off for doing a great job on their recent charter (the fifth of the season, for those keeping count!) during Season 7 of Below Deck Mediterranean, chief stew Natasha Webb and stew Kyle Viljoen opt to pass on the debauchery and do something completely unexpected. And they have a good reason for it.

As you can see in a first look at the September 26 episode of Below Deck Med, Captain Sandy Yawn has a critique or two for Natasha about the “filth that’s downstairs” in the pantry. Captain Sandy shares with the chief stew that while she “doesn’t want to crush [Natasha’s] spirit,” she is less than enthused with the pantry’s cleanliness.

Natasha calls the conversation “a kick in the stomach” and decides to be proactive about the comment. “It’s my job to take criticism like this,” she says, noting that she wants to “fix it.”

So she comes up with a great solution: “The only way to catch up with this pantry mess is not to go on the night out.” Lucky for her, she has a buddy there to help her out, thanks to Kyle.

The above first look also includes an update on how Storm Smith is settling into his role as bosun, as well as Captain Sandy sharing with the crew how much their recent charter guests enjoyed their time vacationing on the Home.

So, how much of a tip did they get? Well, you can check out the preview above to find out and get a front-row seat for their tip meeting.

Watch Below Deck Med on Bravo Mondays at 8/7c and on the Bravo app. Catch new episodes one week early on Peacock.

Life is better as an Insider
Bravo Insider is your VIP pass to never-before-seen content, exclusive giveaways, and so much more!
Sign Up for Free
All Posts About
Kyle Viljoen
Natasha Webb
Sandy Yawn
Below Deck Mediterranean
Related
Style & Living

Natasha Explains Her Decision to Have Two Second Stews

Natasha Responds to Everyone Saying She Looks Just Like Natalya