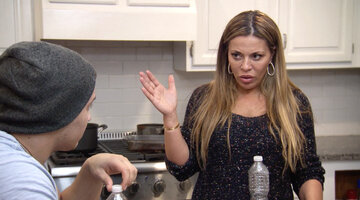 1:10
Preview
Dolores Is Not Happy When She Finds Out Frank Lied to Her...Again 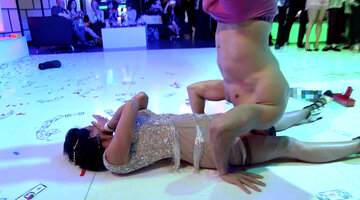 1:02
Preview
Danielle Staub Gets the Ultimate Lap Dance at Her Bachelorette Party 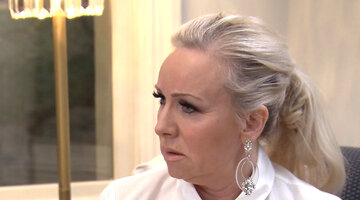 0:39
Preview
Next on RHONJ: Is Danielle Staub a Bridezilla?

Danielle Staub's marriage to Marty Caffrey and split two months later has been a whirlwind affair. The two had been together for years, but the The Real Housewives of New Jersey friend hinted at cracks in their relationship even before their May 2018 wedding on Bimini Island in the Bahamas.

"Just like with any other relationship, there's peaks and valleys. And when you come together at our age, there's going to be a lot of peaks and valleys," Danielle told Melissa Gorga ominously at her bachelorette party.

And while there is at least one Housewife who thought all was well between the couple back at Danielle's bachelorette party ("Do we think that Marty and Danielle were in a good place at the bachelorette party? Yes," Teresa Giudice said during the RHONJ After Show in the clip above), mostly everyone else in the Garden State orbit saw the split coming.

"One day she's madly in love with them, the next day she hates his guts, I mean, if we get to the wedding, it'll go through. Did I think it was forever? Absolutely not. But, you know, we were going with it," Margaret Josephs opined.

"I've always had questions from the very beginning, let's put it that way," Dolores Catania's ex-husband, Frank Catania, said. "Marty was in over his head from the very beginning."
And Melissa's hubby, Joe Gorga, didn't mince words when asked about Danielle's marriage: "I had no faith. As soon as I heard there was a 'Marty' around, I'm like, all right, it's done," he admitted.

"I think at this point in time, Danielle started to explain how there was a little rocky grounds at home and I think where I really noticed that things were not right was a couple days prior leading up to the wedding, I was like, something's off here," Melissa shared. "They weren't even sleeping together in the same room, so I was like, if you start off not sleeping together before you got married... it's not going to get better; it's going to get worse."

Joe Benigno also shared some insider info on what Danielle and Marty have privately told him about their relationship; check out what he says really happened in the clip above. And on Wednesday's all-new episode of RHONJ, see what happened when the crew traveled to Bimini for Danielle's wedding. Watch a preview below.

Next on RHONJ: Tensions Run High in Bimini
Life is better as an Insider
Bravo Insider is your VIP pass to never-before-seen content, exclusive giveaways, and so much more!
Sign Up for Free
All Posts About
Danielle Staub
Melissa Gorga
Teresa Giudice
The Real Housewives of New Jersey
Splits
Relationships
Joe Benigno
Joe Gorga
Related

Has Danielle Moved on from Marty?

How Teresa Supported Danielle After She Split from Marty