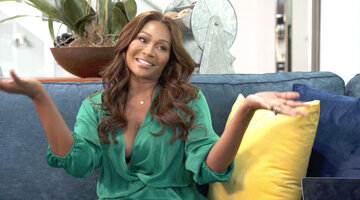 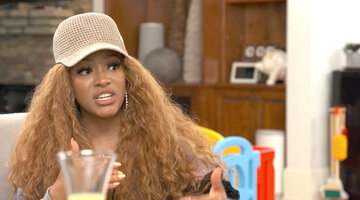 Now Playing
1:38
Preview
Drew Sidora Honestly Doesn't Know If Her Husband Cheated on Her in Tampa 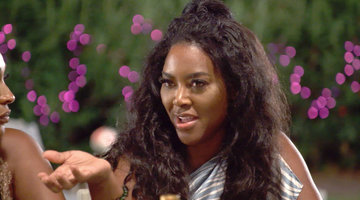 1:15
Preview
LaToya Ali Wants to Know Why Kenya Moore Is Conducting an Investigation

Bravo Digital’s Megan Segura and Erik J. Mac bring you exclusive interviews from Bravo HQ, featuring Bravolebs plus expert commentary and behind-the-scenes scoop straight from Bravo execs. New episodes are released every Saturday morning, wherever you get your podcasts.

Drew Sidora has certainly made quite a splash in her first season as a cast member on The Real Housewives of Atlanta, but she’s not the only one. Her husband, Ralph Pittman, has also made his mark as a Househusband, and the newcomer opened up about it on the February 27 episode of The Daily Dish podcast, which you can check out, below.

When asked how she feels about comments regarding “how good looking” her husband is, Drew replied, “That’s hilarious. I mean, I married him. He’s a nice thing to look at, you know? I mean the first time we met, no lie, our first day, he showed me a little bit of his abs and I was in love, so, I definitely as a woman, I’m like, yeah of course. You can look.”

Although Drew is pretty chill about comments on Ralph’s appearance, she does have a limit.

“I do find it disheartening when you cross the line of some women in the circle that will say it and kinda cross that line and act on it,” she said. “Not mentioning names, but I feel like you can appreciate, but I feel like there’s a line where it becomes disrespectful. So, to those people that are like, he’s good looking, he’s hot, whatever. Thank you. But to those that kinda keep repeating it and in his presence giving him googly eyes, I don’t find that attractive. I find that very disrespectful.”

Drew also opened up about her vulnerability this season, and what it has been like to get real about her marriage in a very public way.

“It’s a crazy rollercoaster. But I love it,” said Drew. “It’s one thing when you argue behind closed doors, right? And that’s all just between you and your mate. But when you start arguing in front of the kids and then America, it’s like, that’s a problem. That’s something when you need to address it once and for all, and we couldn’t just put a Band-Aid on it. So for that reason, we’re in marriage counseling. We’re committed, which is something we’ve never done before. And we want to be better.”

Life is better as an Insider
Bravo Insider is your VIP pass to never-before-seen content, exclusive giveaways, and so much more!
Sign Up for Free
All Posts About
Drew Sidora
The Real Housewives of Atlanta
The Daily Dish Podcast
Related
Style & Living

Drew Reveals What "Killed the Vibe" at Cynthia's Bachelorette

Here's What Drew's Husband Thought of the Dungeon Party