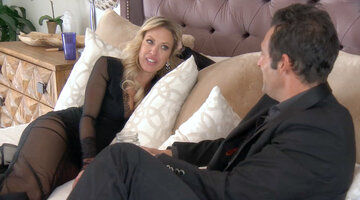 2:10
Preview
Braunwyn Windham-Burke and Her Husband Both Think Tamra Judge Is Really Pretty 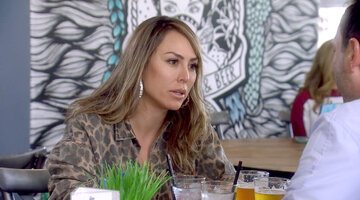 1:55
Preview
Kelly Dodd Reaches Out to Her Estranged Brother 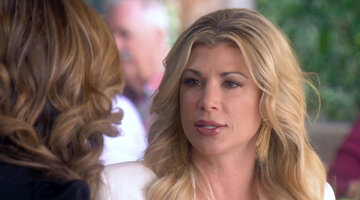 0:38
Preview
Next on RHOC: Alexis Bellino Is Back!

Emily Simpson's husband, Shane Simpson, made a strong impression on her friends and fans alike when his wife debuted on The Real Housewives of Orange County last season. And, well, Shane still has everybody talking with some of the comments he's made about his wife during his interviews this season.

During one interview, Shane seemed to struggle with his answer after being asked if he missed Emily while he was away studying for the bar exam. In another, in which he appeared sitting next to his wife, he said, "Being married to Emily is extreme."

After viewing a montage of some of Emily and Shane's cringeworthy moments this season during Tuesday night's Watch What Happens Live with Andy Cohen, Andy Cohen was pretty taken aback by what he saw. "His interviews are devastating. Are they to you?" he asked Emily.

The RHOC attorney didn't agree with the WWHL host's assessment. "No, because that's him," she explained. "I know when other people see it for the first time, they're like, 'Oh my god, I can't believe he said that."

Andy then noted that some people think Emily and Shane are headed for divorce, but she quickly shot down that speculation. But don't take any of this to mean that Emily is OK with Shane's comments.

"Yeah, I mean, I think he's a dick. Like, he's a jerk. He's being a dick. I get it," she said. "I'm not trying to make excuses for him, but I see a side of him that other people don't get to see, so I think that's what makes up for it. Like, I know it sounds awful, but then I'm the one who goes home with him at night when we're alone and he says nice things and gives me cards and writes nice things to me."

You would think that Shane would be more inclined to show that softer side of himself on camera as well, as Andy also pointed out on WWHL, but that's not the case, according to Emily. "No, you would think. He's obviously smart. He has a high IQ," she said. "But I think the dick side takes over."

In the end, Emily has used this experience as a teachable moment for Shane. "I said to him, 'If someone asks you if you miss your wife and kids, the answer is always frickin' yes,'" she said.

Get all the scoop on this season in The Real Housewives of Orange County Season 14 After Show, above.

Watch Emily open up more about Shane on WWHL, below.

Is Emily Simpson Bothered by Shane Simpson’s Interviews?
Life is better as an Insider
Bravo Insider is your VIP pass to never-before-seen content, exclusive giveaways, and so much more!
Sign Up for Free
All Posts About
Andy Cohen
Emily Simpson
The Real Housewives of Orange County
Family
Relationships
Shane Simpson
Related

Emily Simpson Has a Major Update on Her Marriage