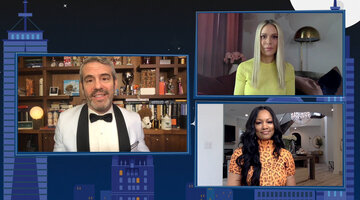 3:14
Show Highlight
Is Garcelle Beauvais Keeping Up with Denise Richards? 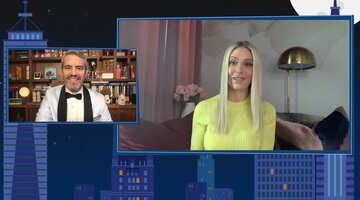 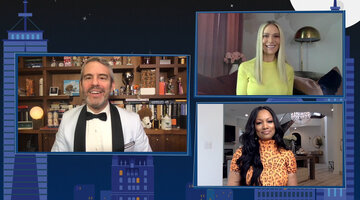 2:45
Show Highlight
Does Dorit Kemlsey Know How Much Eggs Cost?

Garcelle Beauvais may be the newest Real Housewife on the block, but she's already throwing shade like a veteran. Case in point: Her appearance on Watch What Happens Live with Andy Cohen: @ Home on April 15.

Host Andy Cohen asked Garcelle to share her first impressions of The Real Housewives of Beverly Hills cast, including whose style impressed her the most, who was the messiest, and who's the most trustworthy (clip above). During the game, Garcelle seemed to mostly be dropping one name in particular, that of Kyle Richards.

It started off nice enough, with Garcelle naming Kyle as the Housewife who made her laugh the most, "surprisingly so," she said. However, Garcelle later said Kyle was the "least welcoming" to her, and she seemed to have the "biggest ego" out of the group. The RHOBH newcomer hit maximum levels of shade when Andy asked who she would "least want to be quarantined with." "Oh my God, really?" Garcelle said before naming Kyle.

In addition to Denise Richards and Lisa Rinna, with whom Garcelle has had a longtime friendship, the only other Beverly Hills Housewife she had some familiarity with prior to joining the show was Kyle, she told The Daily Dish in an interview before the Season 10 premiere. "Kyle I would see at Beverly Hills events. I would see her every now and then," Garcelle said. "I went to her store a couple of times, actually."

However, Garcelle didn't develop as strong of a connection with Kyle as the other RHOBH ladies this season. "Kyle and I didn’t have a lot of time together," Garcelle shared. "So I didn’t get to know her as much as the others."

It sounds like Garcelle's relationship with Dorit Kemsley will also take some twists and turns this season. "Dorit, I think, is funny," Garcelle told The Daily Dish. But you've got to watch out for Dorit, because she will throw you under the bus in a heartbeat — in a loving, fabulous way."

But it wasn't all drama with the RHOBH crew. Garcelle said that she and Erika Girardi, who she noted on WWHL: @ Home was the "most welcoming" toward her, became fast friends. "Well, I always felt like Erika was a friend in my head. I admire her, was a fan of hers," Garcelle said. "So it was nice to get to know her, and she’s exactly what I thought — no nonsense, say it like it is, which I think is one of the reasons why we hit it off. I think we’re similar that way."

Check out what's coming up for Garcelle, below.

Guess Who's About to Be a Grandma!

Life is better as an Insider
Bravo Insider is your VIP pass to never-before-seen content, exclusive giveaways, and so much more!
Sign Up for Free
All Posts About
Andy Cohen
Denise Richards
Dorit Kemsley
Erika Jayne
Garcelle Beauvais
Kyle Richards
Lisa Rinna
The Real Housewives of Beverly Hills
Friendship
Related

Kyle Claps Back at Dorit's Comments on Fashion Show

Denise "Stopped Shooting with the Group" on RHOBH