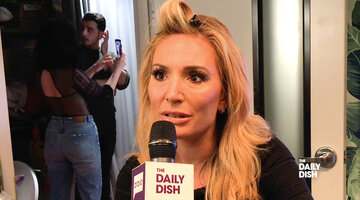 Now Playing
3:05
Below Deck
What Kate Chastain "Didn't Understand" About Below Deck at First

One of the most memorable parts about Below Deck Season 3 was Eddie Lucas' relationship with Rocky Dakota. This not only dropped our jaws because Rocky was making some major waves that season, but it was also because Eddie had a girlfriend back home at the time.

Eddie reflected on his romance with Rocky when the two reunited during Below Deck's 100th episode celebration on Watch What Happens Live with Andy Cohen on January 6. One caller asked if Eddie and his girlfriend immediately broke up after his infidelity was revealed and he returned home from the charter season. "No, actually, not right away," Eddie said. "No, we worked on it for a while. It ended worse than ever."

When host Andy Cohen pressed Eddie for details on how it possibly could have "ended worse," the former bosun said, "Oh, man, we don't have enough time to get into it."

What made this saga even crazier was that Rocky said that she and Eddie hooked up two times after the Season 3 charter season, although he denied this during that season's reunion. But on WWHL, they both confirmed that no, they have not hooked up since the Below Deck Season 3 reunion.

Looks like we finally found something these two can agree on!

Eddie opens up more about his tumultuous time with Rocky in the above behind-the-scenes video of Below Deck's 100th episode celebration.

See more from Eddie and Rocky's reunion on WWHL, below.

After Show: Kate Chastain’s Three Favorite Stews
Life is better as an Insider
Bravo Insider is your VIP pass to never-before-seen content, exclusive giveaways, and so much more!
Sign Up for Free
All Posts About
Andy Cohen
Eddie Lucas
Raquel "Rocky" Dakota
Below Deck
Hookups
Bravo Relationships
Related

Eddie Lucas Says "It's Been Rough to Watch" Below Deck

A Below Deck Alum Is Engaged!