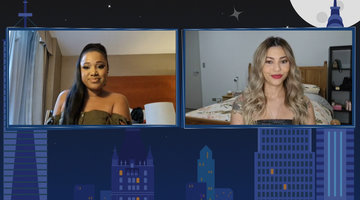 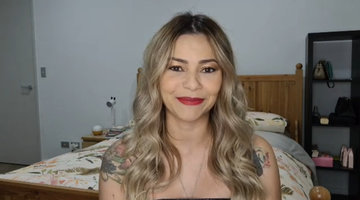 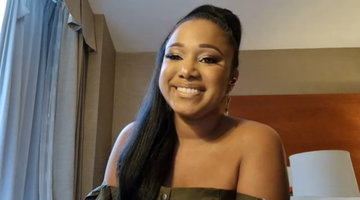 Things are heating up with Dani Soares and Jean-Luc Cerza-Lanaux on Below Deck Sailing Yacht. After flirting and kissing while working the night shift together, the Parsifal III crew members took their romance to one of the guest cabins for some "grown-up cuddling" in the April 19 episode.

But before we got there, Jean-Luc introduced Dani to a very important person in his life: his mom. The deckhand sent his mom a photo of him and Dani earlier in the episode, and she reacted to the pic by saying, "You guys look so cute together. If it's meant to be, it's meant to be."

Later on, Jean-Luc noted in an interview during the episode how much this positive feedback about Dani meant to him. "I'm happy to be out with my crew, but I'd rather be hanging out with Dani alone. I haven't had a serious relationship really ever, but you can definitely tell that there's something there, the sparkle in her eye or the smile on me from ear to ear," he shared. "You know, my mom is my biggest critic when it comes to women, so if she's giving me the go ahead…"

When Dani appeared on Watch What Happens Live with Andy Cohen on April 19 (clip above), the titular host had a speed round of questions for the stew about her romance with Jean-Luc, including if she was "weirded out that he's talked to his mom about" her. "Yes, that was very strange, very strange," Dani said with a laugh.

Andy Cohen also asked Dani if it was a "concern" that Jean-Luc hasn't really been in a long-term relationship. "Um, a little bit, but at this stage, that was not what I was looking for," she explained. "It's just having a bit of fun."

Dani also weighed in on Jean-Luc's work ethic after Andy asked, "Is JL's lack of initiative on deck a red flag for you?" She replied, "A little bit. I would like to see him being a bit more professional. That would be more of a turn-on."

However, Dani had plenty more complimentary comments to make about Jean-Luc on WWHL, praising the 24-year-old deckhand for being "a bit more mature than his age" and admiring how "very nice" and "very respectful" he is. She also said that his 6'9" height was "a perk" and rated his kissing at an eight on a scale of one to 10.

Dani revealed the moment she knew she wanted to kiss Jean-Luc, too. "I think when we were playing Truth or Dare, and he said that he fancied me," she recalled. "I thought that was like, I don't know, it just made me look at him differently."

Dani said that she also appreciated the fact that Jean-Luc didn't get involved in the crew dinner drama in the April 19 episode of Below Deck Sailing Yacht. "No, I like that he didn't because if he tried to do something, it probably would be worse," she explained.

Jean-Luc similarly applauded Dani's smooching skills when he appeared on WWHL earlier this month. "The kissing was good!" he revealed. "I said I wouldn't mind to do it again in the episode, and that was true."

In addition to Dani's tattoos piquing his interest, Jean-Luc shared what initially attracted him to the stew this season. "The very first thing off the bat was her accent. I've always been a fan of accents. Hers was mysterious and peculiar to me because I've never heard it before," he said of Dani, who is from Brazil. "And just her personality and how she never really caused any drama. She just stuck to her work and was good at it, too."

Jean-Luc also agreed that their height difference can have "its advantages," as can their age gap. "They know what they want," Jean-Luc said of the benefits of dating a woman with a few years on him.

To learn more about what to expect from Dani and Jean-Luc this season, check out Bravo Insider's exclusive interview with Below Deck Sailing Yacht executive producer Jill Goslicky and Bravo's Vice President, Current Production Matt Reichman.

Sneak a peek at what's next for Dani and Jean-Luc as the charter season continues, below.

Gary King Has Had It With Jean-Luc Cerza Lanaux
Life is better as an Insider
Bravo Insider is your VIP pass to never-before-seen content, exclusive giveaways, and so much more!
Sign Up for Free
All Posts About
Andy Cohen
Dani Soares
Jean-Luc Cerza-Lanaux
Below Deck Sailing Yacht
Bravo Relationships
Related