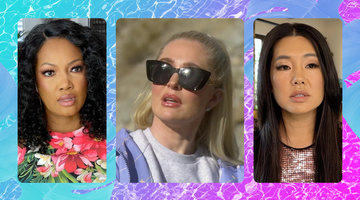 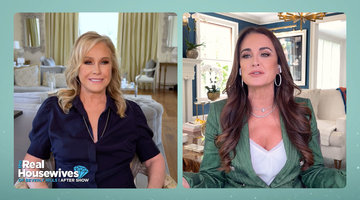 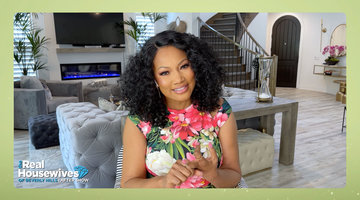 Everyone has absolutely adored watching Kathy Hilton in her inaugural season of The Real Housewives of Beverly Hills. But what does her longtime love, husband Rick Hilton, think of her appearing on the show?

Kathy revealed all about her hubby's reaction to RHOBH during her appearance on Watch What Happens Live with Andy Cohen on September 29. "You know what? He likes it," Kathy, who appeared as a guest with sister Kyle Richards that night, shared.

In fact, Kathy said that Rick did something that "was very cute" while they were watching the episode featuring the Rinna Beauty launch party where some drama notably transpired between Dorit Kemsley and Garcelle Beauvais. "He goes, 'You're sitting all the way down at the table. You've got to get a little more aggressive,'" Kathy recalled of her husband's feedback on the show.

Kathy's family actually got a front-row seat to what went down at her dinner party earlier this season of RHOBH, as seen in a photo of her son, Barron Hilton, and his wife, Tessa, that she shared on Instagram last month.

During an interview with The Daily Dish podcast in June, Kathy opened up about her daughters Paris Hilton and Nicky Hilton Rothschild and how they reacted when the news of her joining RHOBH came out. "They weren't too happy about me joining. Now, they're OK," Kathy said. "They were calling me, and then I just kind of avoided them for a couple days because I didn't know; I was embarrassed, but I got caught. So, I felt like the child, you know. The roles reversed. But we're, we're good now. We're OK."

Nicky confirmed that she did get emotional when she heard that her mom would be joining RHOBH when she appeared as the guest bartender on WWHL in June. "Do you want me to admit something I've never admitted in my life, besides to my husband? When I found out, I cried," she revealed during the WWHL After Show. "I've come around, but I cried."

Kyle, who was in the audience that night during Kathy and Crystal Kung Minkoff's appearance on WWHL, added that she and Nicky share memes and laugh at the current season of RHOBH. Though Nicky said that she was initially "very worried" about her mom appearing on the show, she said that she has "been pleasantly surprised" while watching Season 11.

Catch Up on RHOBH Season 11 in the Free Bravo App!

As for Kyle, she was always "excited" for Kathy to be a part of RHOBH with her, as she shared on Instagram the same day the news was announced. However, she didn't anticipate the positive impact the experience would have on their relationship.

"Doing this with her and having her be a part of this has been really fun and brought us even closer because we talk more often. You know, we're laughing, we're cracking up about the memes of us in bed together," Kyle shared in The Real Housewives of Beverly Hills After Show (clip above). "Who would ever think reality television would actually be good for your relationship [laughs]?"

Kathy agreed with her sister in the RHOBH After Show clip, which was first shared exclusively with Bravo Insider members. "Well, I think being thrown together like that and having the opportunity to experience and go on these little vacations and spending time together, just doing silly, fun things and making up for lost time, we're very lucky," Kathy shared.

Kyle and Andy Share New Info About Kim and Kathy