Sign Up for Free to View
Kenya Moore Is on a Private Jet While the Other Ladies Sweat It Out on a Hot Bus?! 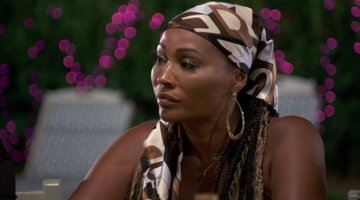 0:34
Preview
Is Dennis McKinley Back in the Picture? 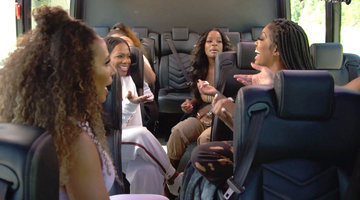 Now Playing
1:19
Preview
Kenya Moore Is on a Private Jet While the Other Ladies Sweat It Out on a Hot Bus?! 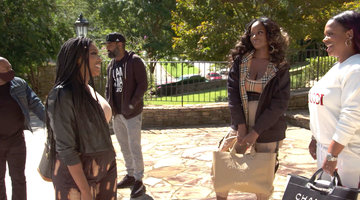 1:13
Preview
Kandi Burruss: "Porsha and I Should Never Kiss Again"

The Real Housewives of Atlanta girls' trip to Isle of Palms, South Carolina got off to a rocky start in the January 24 episode.

It all began when Kenya Moore shared with new friend LaToya Ali that they would not be joining the other RHOA ladies on the five-hour-long drive to their destination. "I am bringing my nanny and Brooklyn, so I have arranged for us to fly private," Kenya told LaToya.

Kenya explained why she didn't arrange for everyone to take a private jet. "It doesn't make sense for all of us because once you get into your mid-size jets and your large jets, then it becomes $50,000. I'm not spending $50,000," she said. "But if it means us getting there ahead of the girls and making sure Brooklyn is comfortable and the nanny, then I'm OK with that."

Kenya anticipated a negative reaction from the rest of the group. "If they don't like the arrangements I made for them, I'm sure they have a platinum or gold or black American Express card they can pull out if they want," she said in an interview during the episode.

That prediction came true as the rest of the RHOA ladies were none too pleased when they heard that Kenya got to take a private jet to Isle of Palms (clip above). But what really bothered them is the fact that Kenya also took her daughter, Brooklyn, with her on the trip when none of the other moms with young children in the group seemed to be given the same option.

Drew Sidora Says Kenya Moore Never Gave Her a Chance: “It Is What It Is”

"The double standards? That's not what's gonna happen on this trip," Porsha Williams said in an interview during the episode. "The fact that Kenya brought her daughter and didn't even extend the option to me, Kandi [Burruss], Drew [Sidora], Shamea [Morton] to bring our kids, that's just wrong."

So, when Kenya appeared in the January 24 episode of Watch What Happens Live with Andy Cohen, the host kicked off the show by asking her about the latest RHOA drama. "Kenya, did you feel at all bad hopping on that PJ with the baby when the other ladies weren't bringing their kids and were getting driven?" Andy Cohen asked the Atlanta Housewife.

"Well, no to the fact that they were being driven because we had to go down there before everyone else," Kenya said in response. "But I don't feel bad about the ladies not being able to bring their children because I always brought my child on every single trip since I had Brooklyn. So, to me, that's just a fact that I always bring her."

The end of the latest episode of RHOA teased that this drama is "to be continued," so we'll have to stay tuned to see how it all shakes out.

Get a sneak peek at what's coming up on the RHOA trip, below.

Kenya Has a Theory About Cynthia's Wedding Drama