Sign Up for Free to View
Is Teddi Mellencamp & Kyle Richards’ Relationship Codependent? 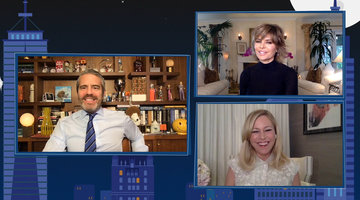 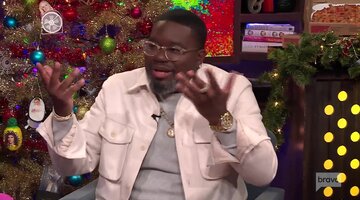 6:21
After Show
Was Gayle King Up Against Whoopi Goldberg for a Seat On The View?

1:24
Show Highlight
Lil Rel Howery Opens Up About Getting Support From Beyoncé and Tina Knowles

Kyle Richards' friendship with Teddi Mellencamp Arroyave has come under fire this season of The Real Housewives of Beverly Hills, and the OG is here to set the record straight on some things that went down in the latest episode.

For starters, Kyle clarified all that chatter about going to "couples therapy" with Teddi. "Teddi recommended someone that could talk to me over the phone so I didn't have to leave my house because I couldn't even get myself to leave my home," Kyle tweeted as the episode aired on May 20.

She added that she has "suffered from anxiety since I was a child" and "at times it has been crippling." "If you don't suffer from anxiety, I don't expect you understand. But if you do, you know what I am talking about," Kyle said in another tweet. "It can be terrifying. I was grateful to have a friend try to help me."

If you don't suffer from anxiety, I don't expect you understand.But if you do, you know what I am talking about. It can be terrifying. I was grateful to have a friend try to help me #rhobh

So what some of the RHOBH ladies referred to as "couples therapy" was really one moment of Kyle and Teddi doing "a breathing technique I was taught to help me through a panic attack," she said on Twitter.

Kyle also addressed Garcelle Beauvais' comments about not being able to establish a deeper connection while the group met with an astrologist at Erika Girardi's house during the episode. "I have been nothing but nice to Garcelle," Kyle tweeted, adding that the two joked and had fun together at her and Denise Richards' dinner parties earlier this season.

She also explained her behavior at Erika's house. "I am a very sensitive [and] emotional person," Kyle tweeted. "When my feelings get hurt in this group I try not to show vulnerability [and] end up stinging back [and] then almost always end in tears."

I am a very sensitive & emotional person. When my feelings get hurt in this group I try not to show vulnerability & end up stinging back & then almost always end in tears 🤷🏻‍♀️😭 #rhobh

In fact, Kyle said she wishes she would have been able to "calmly say 'that hurts my feelings' instead of crying or lashing out" that night.

I hate that I cried. Trust me. I wish I could calmly say "that hurts my feelings" instead of crying or lashing out #rhobh

Kyle responded to a fan who said it seemed like she was "uncomfortable admitting that she and [Teddi] are best friends." "I don't have a problem with that," she said. "I didn't want to hurt anyone's feelings. But their issue was that it's 'weird.'"

Teddi also laughed off the RHOBH squad's "couples therapy" comments on Twitter. "Yeah, Kyle and I are one couples therapy session away from joining next season of Marriage Bootcamp," she joked.

Yeah, Kyle and I are one couples therapy session away from joining next season of Marriage Bootcamp. #RHOBH

For the record, Sutton Stracke doesn't see anything wrong with Kyle and Teddi's friendship. "I don't know all the past history, so I don't think they have a weird relationship at all," she said during her appearance on Watch What Happens Live with Andy Cohen: @Home on May 20 (clip above). "I do think that night it was a lot coming onto Kyle. I was trying to figure out why. I didn't get the dynamic at that point."

As for Lisa, she simply gets a kick out of seeing Kyle and Teddi's reaction to comments about their relationship. "I think that it's really fun to make fun of their relationship. I think that it's fun to goad them because it makes them crazy," she explained on WWHL: @ Home. "So that's the truth. I think it's really fun to say they've had therapy and that kind of stuff because it does make them crazy, and it's kind of fun."

Check out a sneak peek, below.

Everything Is a Contest for The Real Housewives of Beverly Hills
Life is better as an Insider
Bravo Insider is your VIP pass to never-before-seen content, exclusive giveaways, and so much more!
Sign Up for Free
All Posts About
Denise Richards
Dorit Kemsley
Erika Jayne
Garcelle Beauvais
Kyle Richards
Lisa Rinna
Sutton Stracke
Teddi Mellencamp Arroyave
The Real Housewives of Beverly Hills
Friendship
Related