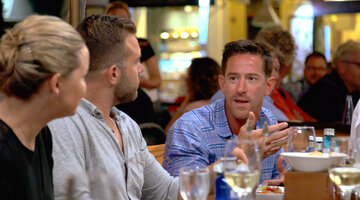 0:36
Preview
Did Peter Hunziker Just Put His Foot in His Mouth? 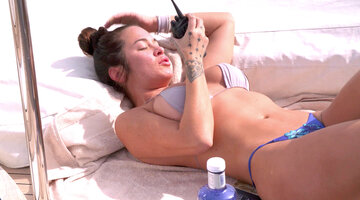 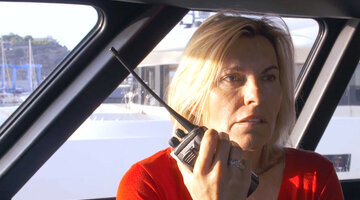 It hasn't been smooth sailing for Hannah Ferrier and her new second stew, Lara Flumiani, this season of Below Deck Mediterranean. The crew members weren't really seeing eye-to-eye even before any charter guests stepped foot on The Wellington, clashing over provisions, laundry, and clearing the table.

The conflict between Hannah and Lara came to a head at the end of the June 8 episode of Below Deck Med when the two sat down in an attempt to hash out their issues. Unfortunately, that only seemed to make things worse, causing the chief stew to enlist the help of Captain Sandy Yawn.

Their conversation continued at the top of the June 15 episode of Below Deck Med. At the encouragement of Captain Sandy, Hannah and Lara agreed to start fresh and move forward in a positive direction. Lara even apologized to Hannah for her behavior.

However, we never actually got the chance to see Hannah and Lara reset. After the crew's first night out together, Lara left the boat, and she was nowhere to be found the next morning.

While Hannah searched the yacht for her second stew, Lara's voice suddenly appeared over the radio asking for Captain Sandy. Captain Sandy met Lara on the dock, and she announced that she would be leaving the charter season. "I'm not a quitter, especially before a charter, but sometimes in life, you have to choose between your happiness and a job," Lara said in an interview during the episode. "So I choose my own happiness."

Lara opened up about working with Hannah and why she decided to leave this season of Below Deck Med during an exclusive interview with The Daily Dish over the phone on June 15 prior to the episode airing.

Lara said that she felt like she and Hannah didn't really mesh well with one another right from the beginning, citing that moment she joked about table decor during their first stew meeting of the season as an example. "I got a negative feeling right away by the way she was acting. There are some things people don't need to say with words; it's just the way they act, the way they move," Lara explained. "For me, as soon as I came on board, I could get this vibe from her right away. It's not even about waiting for someone to say something bad to you; you know right away where you stand with someone by the vibe they give off."

The second stew said that she felt like Hannah wasn't acting professionally and was "really condescending and really belittling" when she spoke to her. What we saw this season was her reaction to how she felt the chief stew interacted with her, according to Lara. "I think I wasn't getting treated properly and decently," Lara shared. "That doesn't mean they can just treat you bad, just because they are your boss, and you're supposed to do whatever they say."

Lara said that she had never been treated this way by a chief stew before in her seven years of working in the yachting industry. "I have to say I've never had a problem like I had with Hannah, because normally, people, they try to talk to you in a polite manner, even if they're your bosses, they still have respect," she shared. "They can't just order you around, give you orders, and expect you to do anything they say, especially after changing the schedule multiple times throughout the day."

Lara said Hannah "was talking to me as if she was superior." "Yes, she was superior in the job, but you still have to have common sense to talk to people as they're human beings and not just to order them around," Lara said. "I don't like when people think they are superior to others. So, for me, it just didn't work. We definitely didn't work."

The second stew said she was happy with how that one-on-one conversation with Hannah in the main salon went. "I think in that talk, I explained myself perfectly, and I said she has to learn to speak to people in a decent way," Lara shared. "It doesn't matter if they are above her or below her in the workplace."

However, she wasn't exactly sure if Hannah really understood where she was coming from with her concerns. "She looked quite lost," Lara said. "And she wasn't getting anything I was saying."

Hannah told The Daily Dish during a separate interview on May 28 that working with Lara "was awful," and the second stew was "insubordinate" during the charter season. "I would much, much, much prefer to just not have a stewardess," she said. "It’s easier on me to do the work myself and with my second — or, in that case, my third — than to have the body on board."

Looking back on working with Lara, Hannah said that she thinks immediately demoting her to the third stew position and putting her in cabins could have possibly helped them have a smoother time working together. "With the experience of being a chief stew for that long, you start to realize that there’s people that you can work with," Hannah explained. "But with the attitude she had, there is just no point in trying. You’re wasting your time, you know? I just put her in cabins because I couldn’t be around her."

With the exception of the deck team, Lara said she felt like several of The Wellington crew members weren't welcoming toward her and recalled feeling excluded during a birthday celebration for one of the guests during the first charter. "I left The Wellington because I wasn't in a friendly environment," Lara said. "Obviously, there were some [crew members] that I really liked, but some others, I really don't like."

After waking up early and leaving her cabin, Lara said she waited outside on the dock for a few hours before she radioed Captain Sandy to tell her that her charter season was over. "I was very, very unhappy. I'm a very sensitive person, so I feel things really strongly, and I just would feel the vibe was really bad for me with the crew," Lara said. "So I didn't feel right anymore to stay."

Is Lara Flumiani Playing Hide and Seek with Hannah Ferrier?

Lara said that there was nothing Captain Sandy could have said at that time to convince her to continue the charter season. "No, there is nothing that she could have said that would have changed my mind, nothing in that moment, because I know how I was feeling and I know when I feel like that, nothing can change my mind," she explained.

Though Lara said she feels like she made the right decision to leave The Wellington, she wishes she had stayed to work on the second charter instead of leaving right before the guests arrived. "I wish that I didn't leave the crew having to deal with the charter guests on their own," Lara said. "I understand that that wasn't a nice thing to do. I should have at least done the next charter."

Lara said she has received some "really nasty" messages from fans watching this season of Below Deck Med, but she tries not to pay attention to those. Instead, Lara said she focuses on "the constructive comments," which "are important." "Some people messaged me, and they said I [was] right to do what I did," she added.

Despite what some people may be saying about her online, Lara said that she is friendly and is "a people person." "Obviously, I came across as an angry person, negative person, but there was a lot of things that happened that turned me into this type of person," she said. "It's not that I'm just like that out of the blue for no reason."

After exiting this season of Below Deck Med, Lara said she took a week off before serving as chief stew on another boat in Antibes in the south of France. She is currently working there as a second stew on a different vessel. Lara said she hopes to go on vacation, possibly to the Canary Islands, for about a week or two after her contract for this yacht is up at the end of August.

Check out what's next for The Wellington crew, below.

A Below Deck Mediterranean Alum Is Returning?

Life is better as an Insider
Bravo Insider is your VIP pass to never-before-seen content, exclusive giveaways, and so much more!
Sign Up for Free
All Posts About
Hannah Ferrier
Lara Flumiani
Sandy Yawn
Below Deck Mediterranean
Exclusive
Related

What Does Malia Think of Adam's New "Boatmance"?