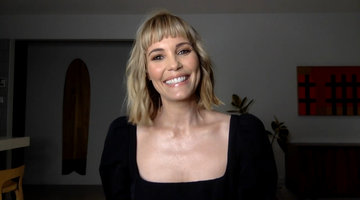 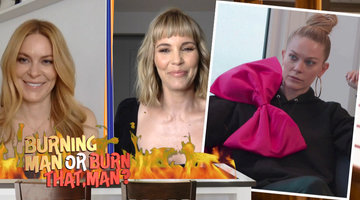 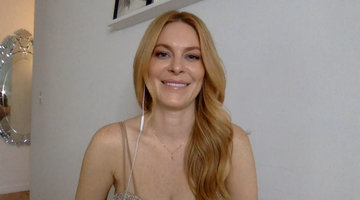 Ramona Singer has historically not always gotten along the best with the newest Apple in the bunch on The Real Housewives of New York City. However, she has seemed to hit it off right away with RHONY newbie Eboni K. Williams in Season 13.

Ramona even invited Eboni to hang out with all the RHONY ladies at her home in the Hamptons. "I felt an immediate bond with you, and I don't really feel that with many people," Ramona told Eboni at the get-together at Sonja Morgan's townhouse in the RHONY Season 13 premiere. "Just somehow, it felt like you had been here forever."

Eboni agreed with Ramona that it felt "very easy" and "very natural" to get to know her. But Leah McSweeney expressed her doubts about this budding friendship, sharing in an interview in the episode, "I've already felt the 'Singer Stinger' last year, and I am gonna do my damn best to make sure Eboni doesn't have to go through what I went through."

RHONY fans have similarly been curious about Ramona's warm welcome to Eboni. During Leah's appearance on the May 11 episode of Watch What Happens Live with Andy Cohen, one member of the virtual audience asked, "On a scale of 1 to 10, how genuine do you think Ramona's intentions are with getting to know Eboni, and do you feel like Ramona is laying it on a little too thick with how much they're bonding?"

"Listen, at the end of the day, I think Ramona now does respect and really love Eboni," Leah said in response in the above clip. "But at first, I think she was just totally being full of s--t, so I'm gonna give that a 2."

That trip to Ramona's house in the Hamptons would be an opportunity for everyone to really get to know Eboni and vice versa. During an interview in a special bonus episode of The Daily Dish podcast released on May 12, Eboni said that she felt like everyone would be "taking notes on each other" during that trip. "I think I knew enough to not expect too much, meaning very much still sizing everybody up, and I knew they were sizing me up, you know," Eboni explained. "I kind of joke with the women… I kind of had a file on everybody, and I knew I would come back from the Hamptons with a much richer file on everybody and they the same. You know, they definitely got a big, old dose of who I am and what I'm about."

The getaway got off to a bit of a bumpy start with Ramona's use of the term "the help" to describe the hospitality director at her home, which didn't sit well with Eboni in the May 11 episode of RHONY. She teased what we can expect to see when she confronts Ramona about this in the next episode.

"Before we even got into what didn't sit well with me with the comment and why I felt the way about the comment, Ramona wanted to shut down the conversation before it started — literally. You'll see that. And, again, I think this is where there's that opportunity for personal growth on both sides of the conversation, not just their growth, but my growth," Eboni explained. "I had a choice in that moment. You know, I did just meet this woman. Do I kind of concede her point? OK, not now? And then not now to me just always feels like, OK, so when, you know? You don't want to discuss it now so, you know, is it tomorrow at six? Is it Tuesday at four?"

Eboni K. Williams Shocked Leah McSweeney with This Comment About Her First Season of RHONY

Eboni said that she ultimately concluded that she and Ramona needed to discuss this issue in order to be able to continue to build a friendship. "If I allow this moment to pass us by, we're not going to really have an authentic connection, because I'm going to keep looking at you sideways until this is addressed. And so I really pushed her for the sake of a budding friendship," she said. "You know, it's like, listen, I really do want to have a friendship with you, but I'm not going to be able to get there if I don't figure out, like, what your intention is real quick."

Eboni said that she didn't want to lose the momentum in her friendship with Ramona since they hit it off so quickly at Sonja's townhouse. "I wanted to maintain those feelings that we had brewing, like, let's keep it in that place," she said. "And I don't want to start thinking something that's inconsistent with that impression of you, because you just called this lady 'the help' and the wrong name."

In fact, Eboni and Ramona have since shown each other a lot of love on Instagram.

Despite the ups and downs we are set to see among the group this season, Eboni shared during her WWHL debut with her castmates on May 4 that she couldn't be more grateful for her new friendships with these women. "This is a legendary franchise," Eboni said. "It's my honor to be a part of it, and I want to thank every person that's a part of this show and these women for embracing me."

Want more RHONY? New episodes air every Tuesday at 9/8c or catch up on the Bravo app.

Leah McSweeney Has a Brand New Apartment, and It Is Adorable