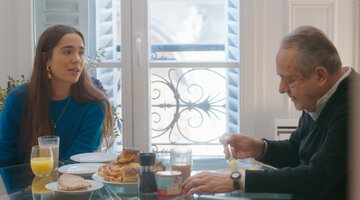 Now Playing
1:42
Preview
Maurgaux Lignel Opens Up About How Financially Dependent She Is On Her Dad 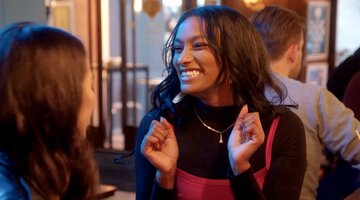 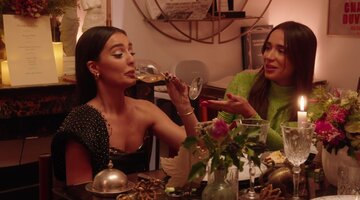 2:02
Preview
The Girlfriends Plan a Trip to a Sex Club

As it turns out, Real Girlfriends in Paris cast member Margaux Lignel's life has always been about, well, Paris. While she was raised in America, her parents are, in fact, French. And, we got to learn more about her family's history during the September 5 premiere of RGIP, including all the 411 about her dad, Jean Lignel, who we also got to meet while he was having a meal with his daughter in Monday's episode (clip above).

"I was born and raised in New York, but I chose to move to Paris because my family's back here. My parents are French and I decided it's time to face my family for the first time in a long time," she shares in the premiere episode. "Both my parents live in Paris and they got a divorce about 7 years ago now. Because my parents are both French, and I grew up between New York and Paris, I'm fully bilingual."

From there, we learn more about her father's interesting backstory in the newspaper industry and as an art collector. "My dad owned a newspaper in his first half of his life. He's 80 now. So when he was in his late 40's, he sold the newspaper," she explained. (According to the New York Times, Jean owned Le Progrès, a newspaper based out of Lyon, France.) "With that money, he just really started investing in different artists like Andy Warhol and Keith Herring, and [they] just turned into massive investments."

Here's What's to Come on Real Girlfriends in Paris!

We also learn her dad bought his daughter her "super new" apartment that she shares with her dog and also that he helps her financially.

"I know that I'm lucky to have that family support system, but I'm 26 and it's not a good look for me to be asking my dad for money and his help," she said. "I'm one of those people [where] I have, like, a million business plans. I have lists of amazing ideas that I have not gone through. Committing to a project would at least be a step in the right direction, but I'm scared as f---k to pull the trigger on stuff, scared of failure"

Margaux, according to her BravoTV.com profile, "is a free spirit looking for love, fun, and lasting friendships. She has been educated at some of the best schools in the world, including the American School in Paris, FIT, and the Condé Nast College of Fashion and Design. Born to French parents in New York, she spent most of her formative years traveling back and forth to Paris, and she just moved into a new apartment in the 5th arrondissement. Margaux is yearning to chart her own path, on her own terms, and she is figuring out exactly what she wants to do next."

As for what her life looks like in the love department, she also shed some light on that in the season premiere, noting, "So Paris is like the city of love, as everyone knows, and all that s--t, but I've been back like six months and dating in Paris is super hard like we're not all falling the f--k in love in front of the Eiffel Tower."

She added, "I am such a hopeless romantic but it just hasn't happened for me in a while. I haven't had that butterfly, that excitement in so long and I miss it so much."

BTW, you can learn more about the rest of the RGIP cast,  Anya Firestone, Emily Gorelik, Kacey Margo, Adja Toure, and Victoria Zito, by checking out all their details here.

Following the premiere, Real Girlfriends in Paris will air on Mondays at 9/8c on Bravo. Each episode will stream next day on Peacock.

Life is better as an Insider
Bravo Insider is your VIP pass to never-before-seen content, exclusive giveaways, and so much more!
Sign Up for Free
All Posts About
Adja Toure
Anya Firestone
Emily Gorelik
Kacey Margo
Margaux Lignel
Victoria Zito
Real Girlfriends in Paris
Related

Get to Know the Cast of Real Girlfriends in Paris

Get Your First Look at Real Girlfriends in Paris