After Show
The Potomac 'Wives Were "Pleasantly Surprised" by Karen Huger's Perfume Reveal! 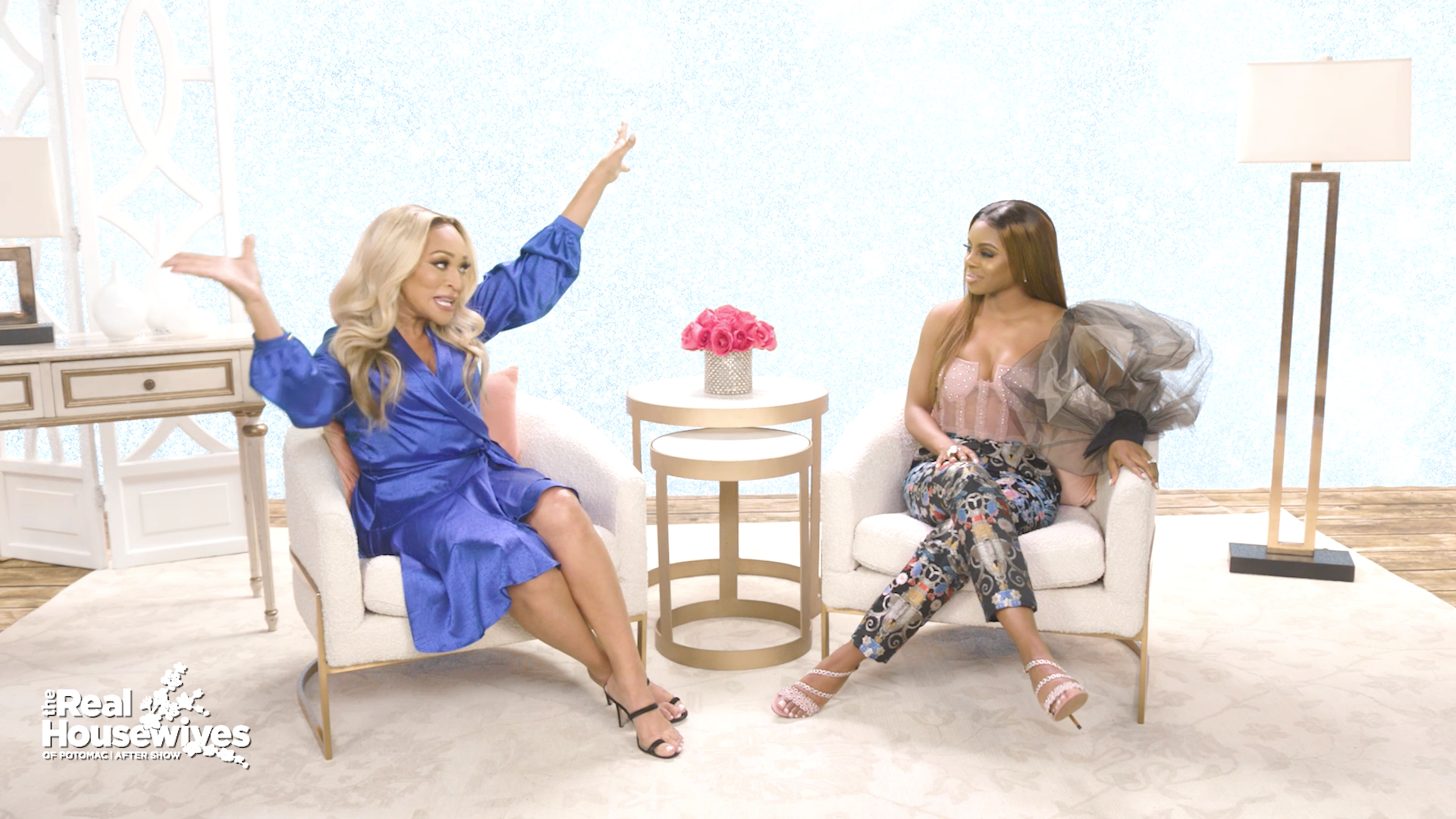 After a season full of jaw-dropping surprises and shocking moments, The Real Housewives of Potomac Season 4 reunion is upon us. And if you thought things couldn't possibly get any crazier following the epic season, think again.

But before we go full-steam-ahead into the reunion, let's talk about some of the most incredible moments that happened. And actually, some of them didn't happen during the show itself but during The Real Housewives of Potomac After Show. Take a look at some topics that the Potomac ladies — Ashley Darby, Gizelle Bryant, Robyn Dixon, Karen Huger, Monique Samuels, and Candiace Dillard Bassett — discussed and get caught up before the reunion airs.

1. Ashley Darby Reacts to the Soul-Crushing Moment When Her Father Slammed the Door in Her Face 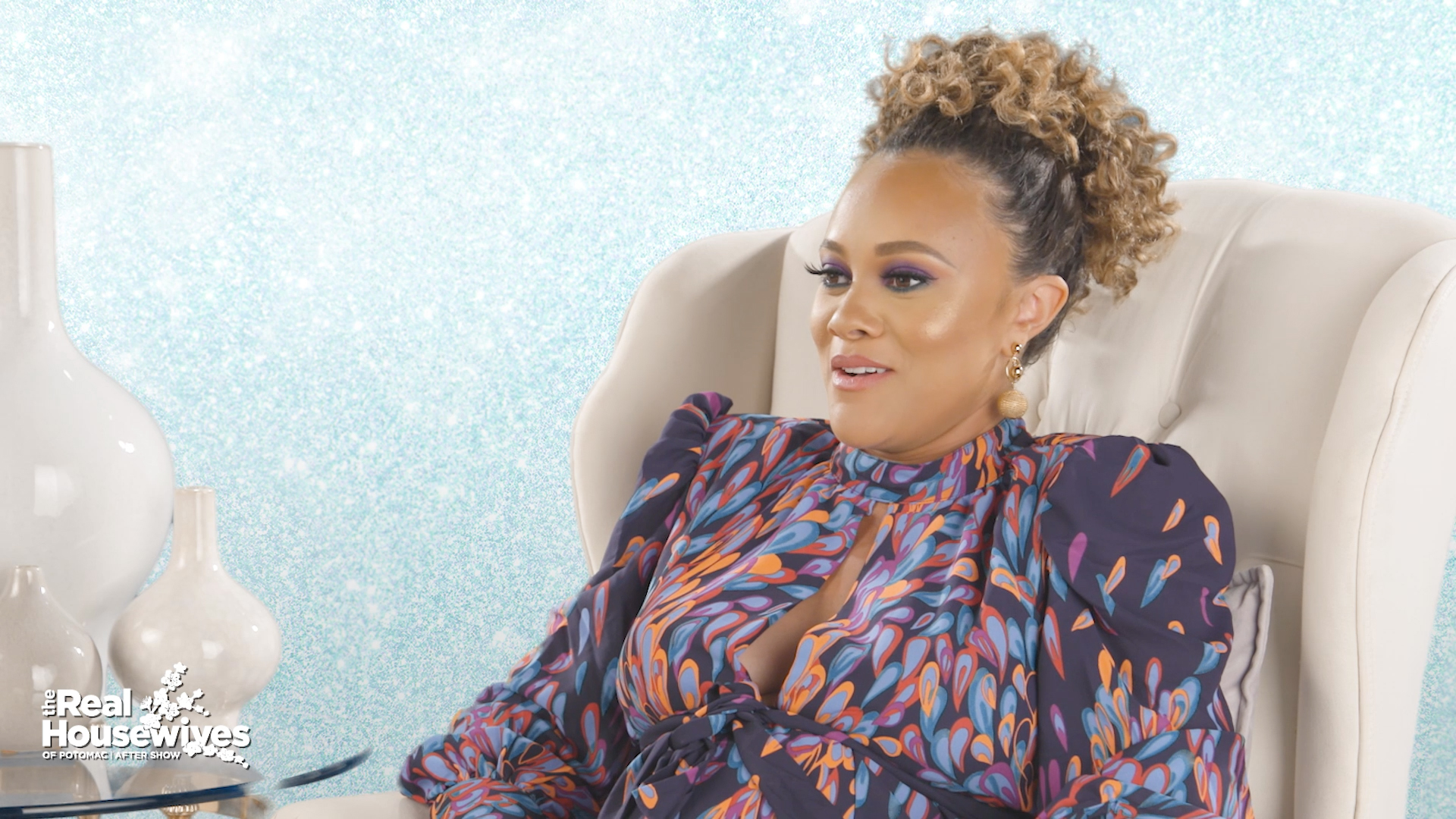 When Ashley attempted to make face-to-face contact with her father after 30 years, she went in with high hopes and the best of intentions, despite the fact that he had already blocked her on Facebook. When Ashley decided to approach him at his home, he shut the door in her face and refused to speak with her. In the RHOP After Show, Ashley got emotional describing how she felt being rejected by her father. What she has to say about her father now and how he parents his two other young children, however, may surprise you; check out the new mom's insight about her estranged father in the clip above.

2. Candiace Dillard Bassett Reveals Exactly Why Her Mother Hit Her in the Face 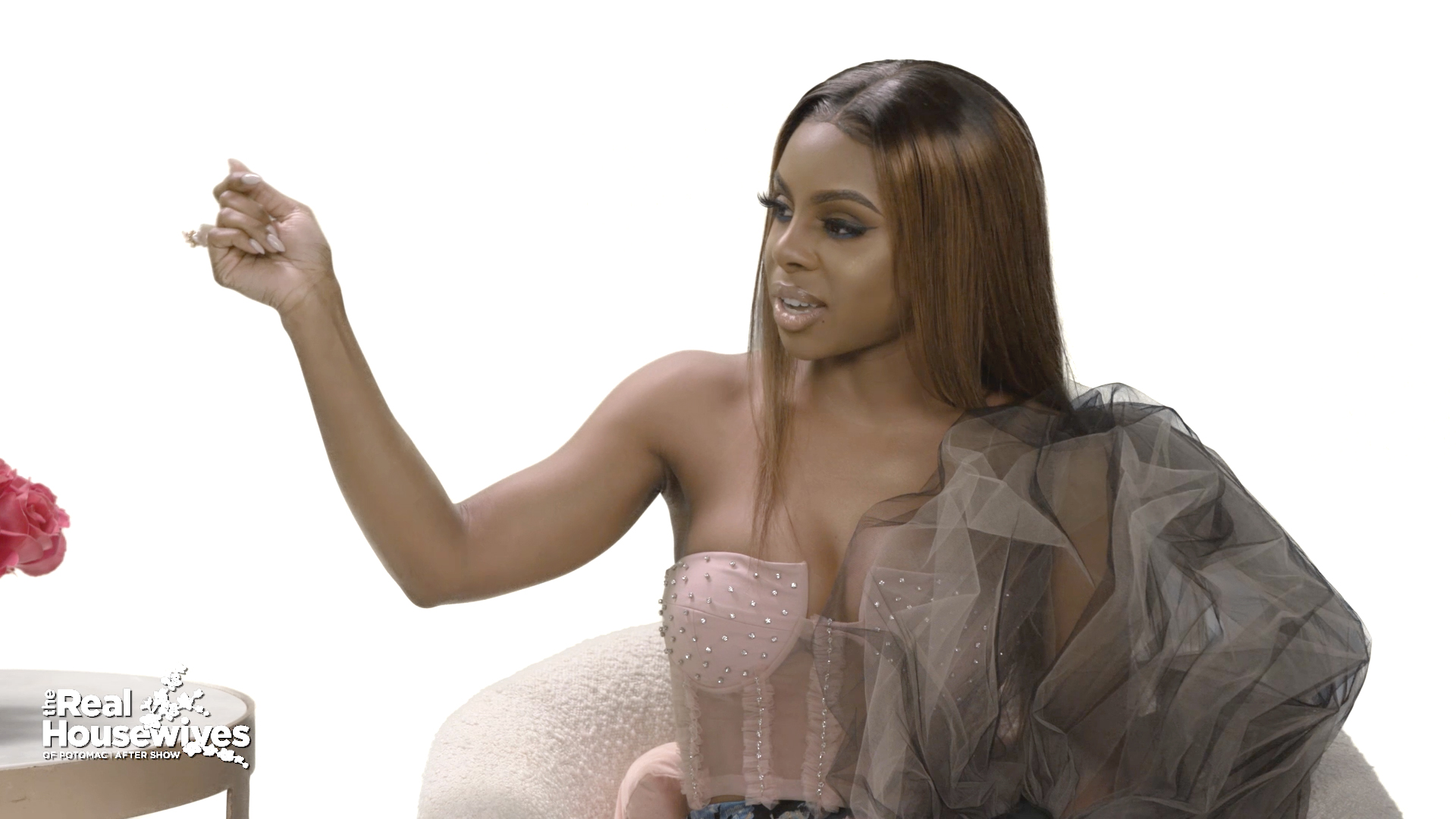 Candiace revealed the shocking news that her mom had hit her in the face with her purse this season. In The RHOP After Show, she lent a bit more context to the story. "So my best friend was getting married in Atlanta, we both went to the wedding... my mother was my date. We went to the wedding, had a great time, we were leaving the wedding. We were waiting for our car in the lobby of the hotel and we started a conversation that we shouldn't have started about her preferences on the way I speak to her versus my preferences on the way that she speaks to me," Candiace began. Not off to a great start, huh? Press play on the video above to hear what ensued that led to the big smack.

3. What's the Status of Ashley Darby and Karen Huger's Friendship?

After Show
What's the Status of Ashley Darby and Karen Huger's Friendship? 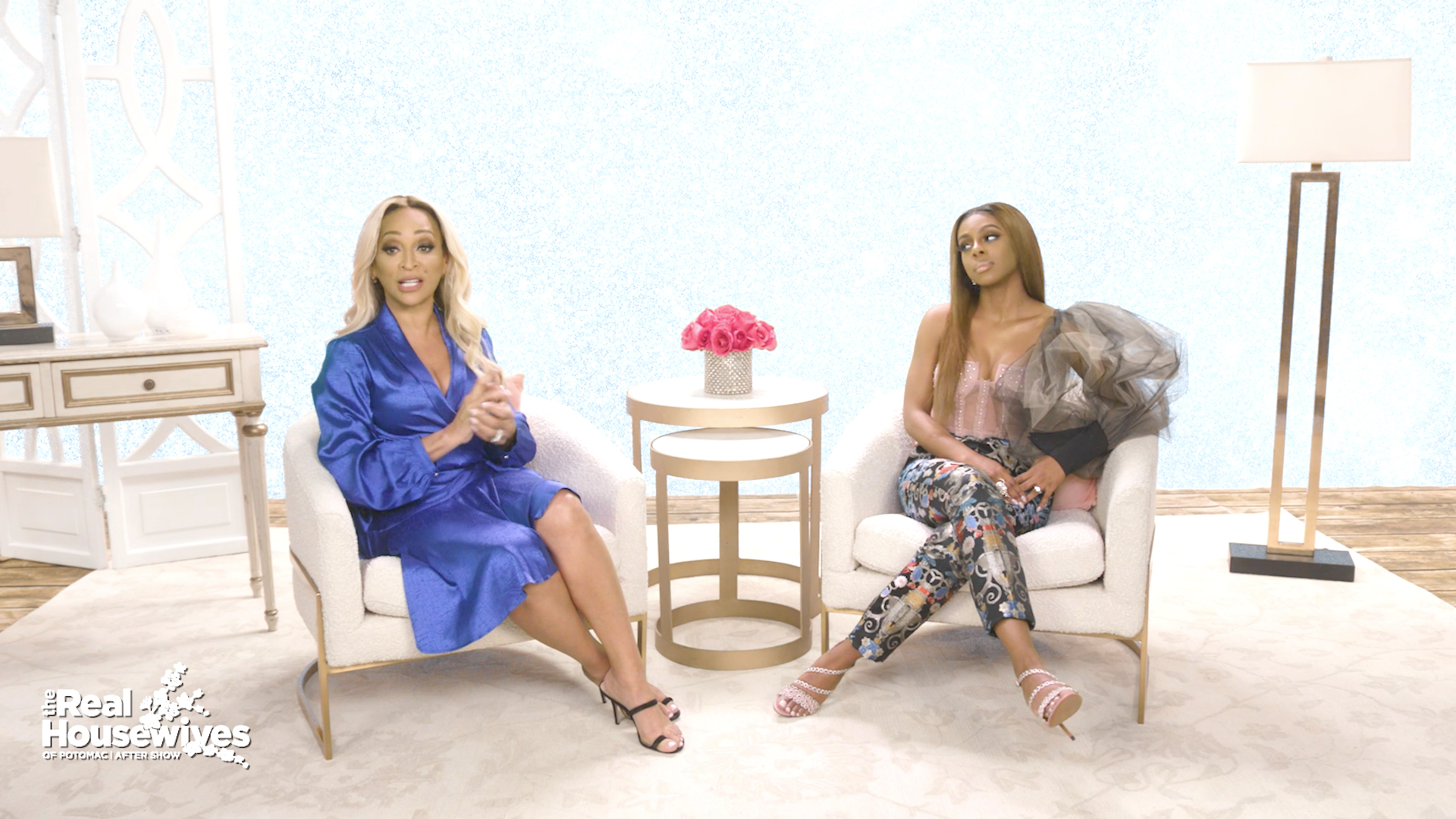 Ashley and Karen most recently came to blows in the Cayman Islands. Though things seemed to cool off, anything can happen between seasons, and the two Potomac ladies gave updates on their relationship in The RHOP After Show. And it seems like they're actually... getting there? Sort of? Check out what that the two had to say about what's new in their friendship above.

4. Gizelle Bryant Questions Whether or Not Karen Huger Is Actually a Business Owner 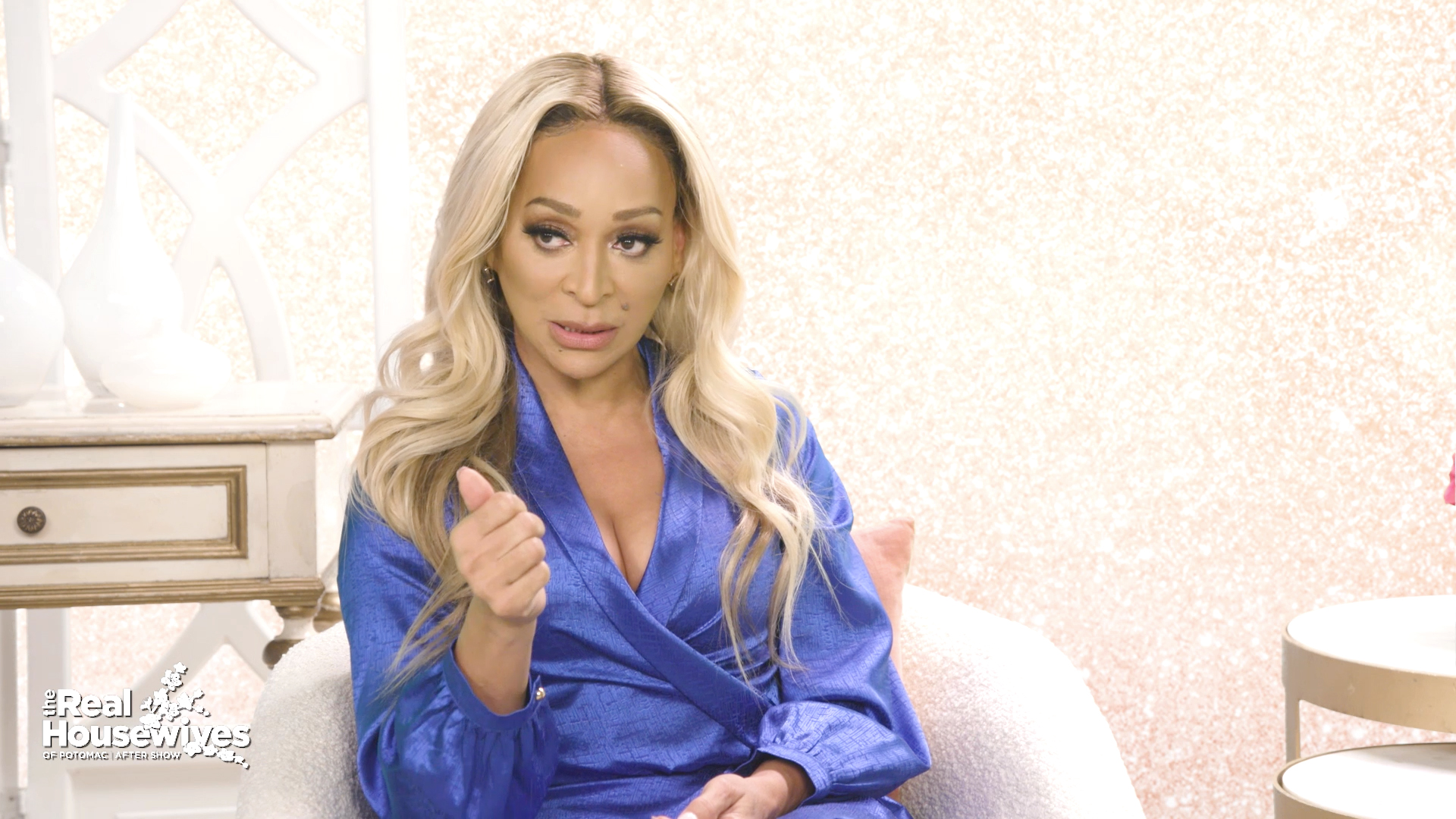 Gizelle previously expressed doubt that Karen owns her perfume business — but did seeing the perfume, La'Dame, in the flesh in the season finale change her mind? Press play on the video above to find out. Predictably, Karen insists: "I am a businesswoman. I have partners... If you came to the launch and the reception at Bloomingdale's in Virginia, you met my partners. Again, it was selective. I'm not secretive."

5. This Is Exactly How the Potomac 'Wives Found Out Ashley Darby Was Pregnant!

After Show
This Is Exactly How the Potomac 'Wives Found Out Ashley Darby Was Pregnant! 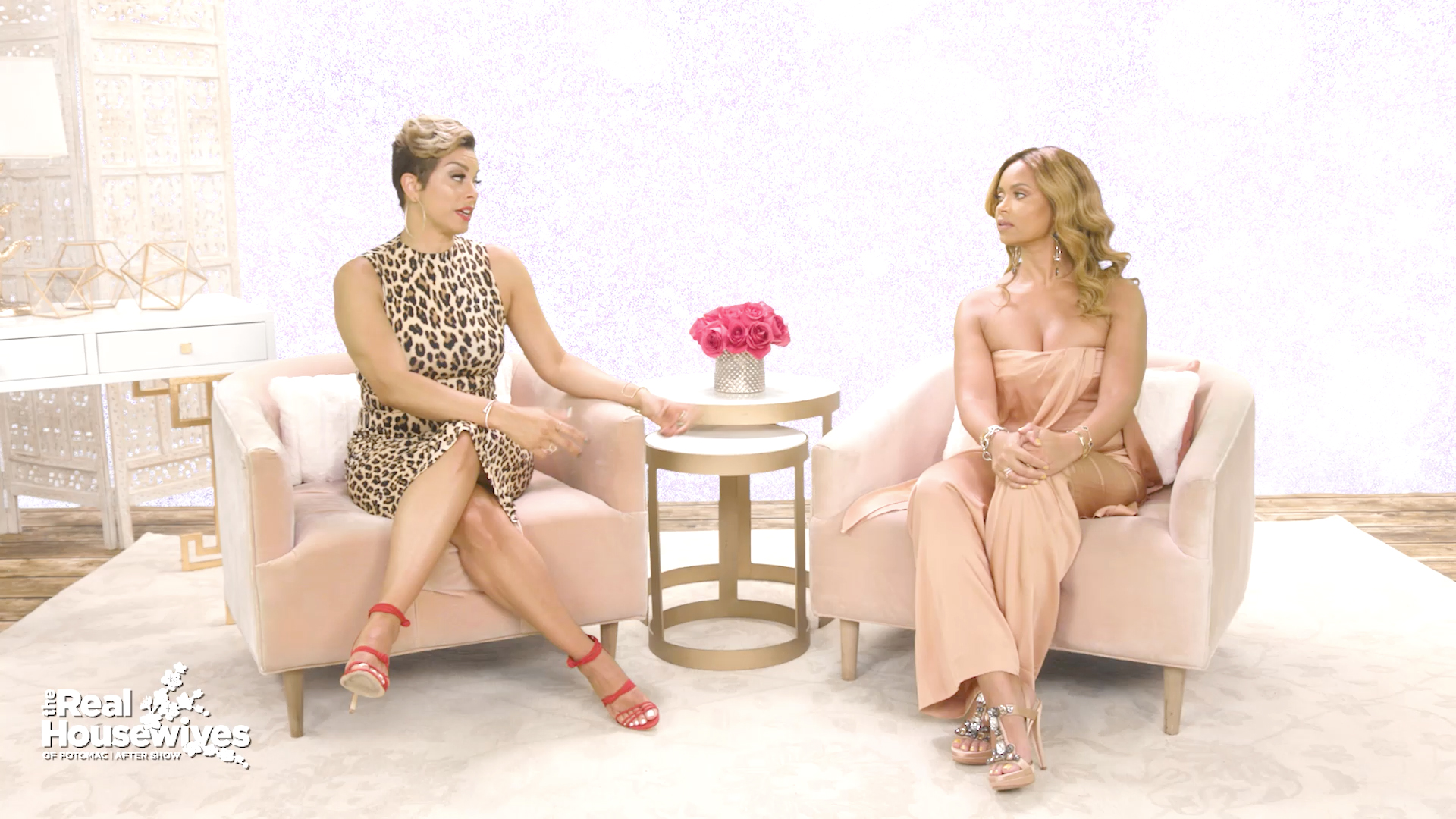 On the Season 4 finale of RHOP, Ashley revealed that she was pregnant and got to see her baby at a sonogram appointment. So while fans got to see these special moments with Ashley's family, how did the rest of the Potomac ladies react when they found out she was pregnant? As it turns out, some of them had their suspicions at the La Dame event, and they ended up finding out at different times — and at least one of the ladies ended up spilling the beans before Ashley had a chance to tell everyone herself. Hear what they had to say in the video above.

And tune into the RHOP Season 4 reunion Part 1 on Sunday at 8/7c. Preview, below.

These Are the Best RHOP Season 4 After Show Moments