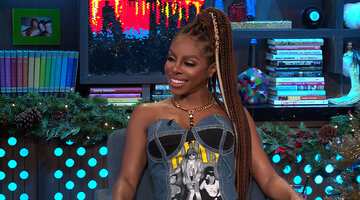 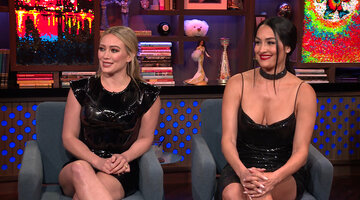 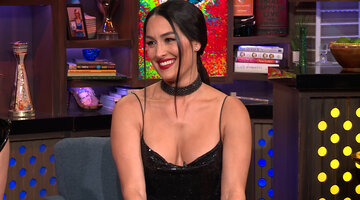 The Real Housewives of Potomac's Candiace Dillard Bassett and Ashley Darby have been on a friendship roller coaster during Season 7. Though the duo still seems to be stuck in a dip right now, they've still found a way to support each other's highs.

When Candiace stopped by the Bravo Clubhouse for Watch What Happens Live with Andy Cohen's Sunday, December 4, episode, the subject of Ashley's budding romance with Winter House's Luke Gulbranson naturally came up, and we were not ready for the "Drive Back" singer's reaction.

"As much as I, like, just cannot stand her, I'm really happy for her," she told host Andy Cohen.

That wasn't Candiace's only shocking WWHL revelation either. "We have so much fun together. Outside of the show, I would maybe go on record as saying we'd maybe be friends," the RHOP 'Wife added, before again emphasizing the phrase "outside of the show."

Earlier, Ashley gave her own friendship update, confirming that their ceasefire had been short-lived. “We’re working on it,” she said in a November FOX 5 DC interview, referring to their relationship as a "work in progress."

Meanwhile, her and Luke's romance also seems to be progressing. After they finally hung out for the first time at a BravoCon 2022 party, Ashley revealed that they continued “getting to know each other” via texts and phone calls. In the interim, they've attended a few professional sporting events together in Washington, D.C., and even hit a Saturday Night Live after-party, as Candiace's fellow WWHL guest, Matt Rogers, confirmed during the episode on Sunday.

“He’s actually a very compassionate, kind guy. He actually gives really good life advice, too, which I was surprised about,” Ashley shared on the November 7 episode of Below Deck Mediterranean alum Hannah Ferrier’s Dear Reality, You’re Effed! podcast. “There are just so many layers to him, to his personality. He’s got a lot more depth.”

Watch The Real Housewives of Potomac on Bravo Sundays at 8/7c and next day on Peacock. Catch up on the Bravo app.

Watch Winter House on Bravo Thursdays at 9/8c and next day on Peacock. Catch up on the Bravo app.

Life is better as an Insider
Bravo Insider is your VIP pass to never-before-seen content, exclusive giveaways, and so much more!
Sign Up for Free
All Posts About
Ashley Darby
Candiace Dillard Bassett
Luke Gulbranson
The Real Housewives of Potomac
Bravo Relationships
Related

Everything We Know About Ashley Darby & Luke Gulbranson