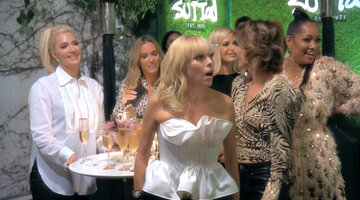 1:17
Preview
Sutton Stracke Is Excited to Get a Toast From the Mayor of West Hollywood 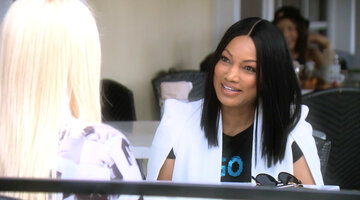 1:25
Preview
Guess Who's About to Be a Grandma! 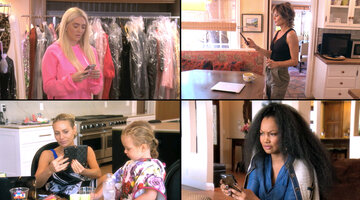 Now Playing
1:24
Preview
Teddi Mellencamp Arroyave's Invitation to Her Retreat Is "a Disaster Waiting to Happen"

We're only two episodes in to the new season of The Real Housewives of Beverly Hills, and the drama is already as intense as ever — and it's all due to a text invite.

Teddi Mellencamp Arroyave invited the Beverly Hills Housewives to her ALL IN Retreat in the April 22 episode of RHOBH with a group text message, which read:

"Hey guys, as you're probably already aware, I'm hosting an All In retreat at Surf and Sand in Laguna Beach. I'd love to have you all come out for the day/night of Oct. 4th (option to sleep over) to take part in some health and fitness fun. I know it may not be something that floats everybody's boat, so don't feel obligated to come! I promise it will not hurt my feelings. Let me know if you're in as soon as possible and I'll reserve your spot. Xx Teddi."

That text ended up raising some eyebrows among the RHOBH ladies, who seemed to be confused as to why Teddi would say that they shouldn't "feel obligated to come" to her event. "This is a disaster waiting to happen," Erika Girardi remarked in an interview during the episode (clip above).

So when Lisa Rinna joined Teddi on the ride to Sutton Stracke's store opening, she let her know that it would be best if she clarified her invitation with the group. "I think everybody wants to support you, everyone loves you, but I think they're a little nervous. It's too open: 'I'd love for you to spend the night, but you don't have to,'" Lisa told Teddi. "So I feel like you need to make it clear what feels right for you in this situation and be real specific about it."

When Teddi caught up with the other ladies at the event, she let them know that she really doesn't care if they come to her ALL IN retreat or not. "Anybody that actually wants to come because they want to do it, they should come," she said. "But anyone that's gonna come and be a pain in the ass, I really would rather be like, 'Don't come!'"

Teddi made it clear that she would not be bothered by anyone's absence from the retreat. "Honestly, I can give you my word. You not coming will not upset me," Teddi said.

Teddi's fellow Beverly Hills Housewives seemed taken aback and a bit offended by her comments. Garcelle Beauvais even said during one of her interviews that she believes Teddi definitely still cares if they come or not.

The RHOBH accountability coach addressed her controversial invitation on Twitter as the episode aired, sharing how she really should have concluded it. "I should have finished the text with, 'If you do come, please don’t be an a--hole,'" she joked.

She explained that her past drama with Erika over not staying over at her beach house in Season 8 of RHOBH, which we were reminded of during the episode, "is exactly why I worded my text to the ladies the way I did."

All joking aside, Teddi really clarified her intentions behind her text. "Here’s the thing: this retreat was about my business which has been mocked endlessly," she tweeted. "I’m saying I do not care if the women come because I would rather they don't if they’re not interested in seriously partaking. End of story (but with this group it never is)."

Here’s the thing: this retreat was about my business which has been mocked endlessly. I’m saying I do not care if the women come because I would rather they don't if they’re not interested in seriously partaking. End of story (but with this group it never is🤦🏼‍♀️) #RHOBH

There's more drama on the way for Teddi. Check out a preview, below.

A Dinner Party Disaster
Life is better as an Insider
Bravo Insider is your VIP pass to never-before-seen content, exclusive giveaways, and so much more!
Sign Up for Free
All Posts About
Erika Jayne
Garcelle Beauvais
Lisa Rinna
Sutton Stracke
Teddi Mellencamp Arroyave
The Real Housewives of Beverly Hills
Friendship
Related