Sign Up for Free to View
Parker McCown Gets Engaged! 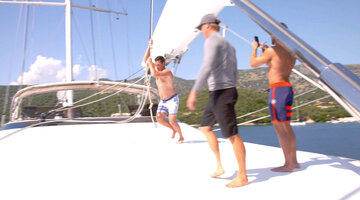 0:44
Preview
These Below Deck Sailing Yacht Charter Guests Are Swingers... 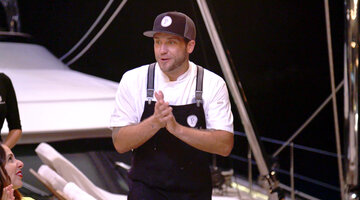 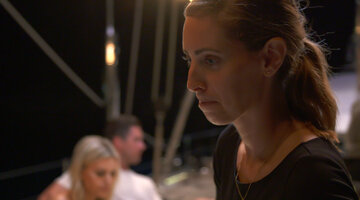 0:49
Preview
Is Jenna MacGillivray Getting Revenge on Madison Stalker?

Parker McCown has been full of surprises this season of Below Deck Sailing Yacht. Never was that statement more true than in the April 20 episode when, after suddenly resigning as deckhand, he went and surprised his ex-girlfriend Kaiti, who had flown in to see him in Greece, with an underwater proposal while the two were scuba diving (clip above).

We also saw Parker serenade Kaiti with his ukulele during their diving trip with a tune that actually has a special meaning for the couple. Parker explained on Instagram on April 21 that he wrote that song, "Dive Down," while he and Kaiti were on a break. "When I originally wrote this song we had decided to part ways and adventure on our own," the deckhand explained. "I hadn’t seen Kaiti for 7 months before I proposed."

Here’s a full version of the song featured on @belowdecksailing I wrote for @kaitishmaiti 🏝 When I originally wrote this song we had decided to part ways and adventure on our own. 🌎 I hadn’t seen Kaiti for 7 months before I proposed. I can’t express how thrilled I am to know that we can officially adventure together...forever. Sometimes DREAMS really do come true. After all, isn’t life just a Field of Dreams? #exploretheworldwithmusic #belowdecksailing #corfugreece #fieldofdreams @bravotv #washyourhands

Parker also shared the full version of his song in a video on Instagram, which ends with him giving Kaiti a kiss. "I can’t express how thrilled I am to know that we can officially adventure together...forever," Parker gushed in the caption about his fiancée. "Sometimes DREAMS really do come true. After all, isn’t life just a Field of Dreams?"

Parker and Kaiti had been broken up while he was part of the Parsifal III crew this season of Below Deck Sailing Yacht. But as the season went on, the deckhand decided to reconnect with his former flame via texts and phone calls. She eventually agreed to meet up with Parker to go scuba diving, which made him very emotional.

After traveling around other small, remote islands in Greece as a newly engaged couple, Parker and Kaiti returned to the United States to see his family in Maryland, Parker told The Daily Dish in advance of the latest episode of Below Deck Sailing Yacht airing. They then spent some time in Vermont before settling in Colorado where they are now living on a 36-acre wooded ranch about an hour south of Denver.

Parker told The Daily Dish that he and Kaiti plan on getting married in Colorado in late summer 2021. In the short-term, the couple had plans to get back to work on a boat somewhere with a warmer climate, such as California, Florida, or Hawaii, but that was before the global shutdown due to the coronavirus (COVID-19) pandemic.

Parker said that one of his dreams is to eventually own a catamaran with a recording studio on it. But for now, he and Kaiti are "slowly working towards a goal" of teaching kids about marine ecology and conservation aboard a catamaran, which he also noted would be "a ways down" the line. "But I think getting back to the water and on a boat is another stepping stone," Parker said of his immediate plans. "And maybe another season [of yachting]. We’ll see."

Catch new episodes of Below Deck Sailing Yacht Mondays at 9/8c. Check out a sneak peek, below.

Adam Glick: "That Was the Most Awkward Thing Ever"

Life is better as an Insider
Bravo Insider is your VIP pass to never-before-seen content, exclusive giveaways, and so much more!
Sign Up for Free
All Posts About
Parker McCown
Below Deck Sailing Yacht
Weddings
Bravo Relationships
Engagements
Weddings
Related

A Crew Member Resigns on Below Deck Sailing Yacht