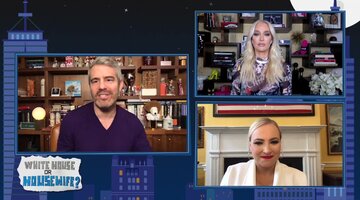 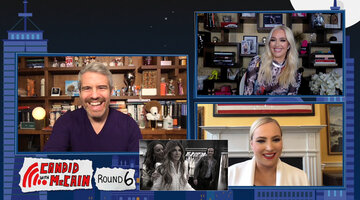 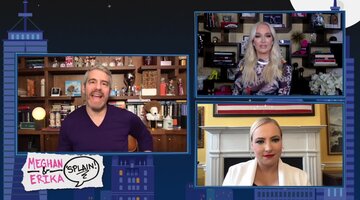 If that little tease of the drama to come between Denise Richards and the rest of The Real Housewives of Beverly Hills cast during the Season 10 premiere made your jaw drop, just wait until you see it all play out, according to Erika Girardi.

When the Housewife appeared on the Watch What Happens Live with Andy Cohen: @ Home After Show on April 22, Andy Cohen read a question from a fan who wanted to know more about what we can expect from Denise this season (clip above). "Is the hype of the Denise situation really that bad?" he asked. "How would you describe it all in three words?"

Erika responded without hesitation, "How 'bout this: You wanna watch."

You don't have to tell us twice, Erika! From the previews we've seen so far, it looks like there's going to be some major chatter about Denise among the 90210 crew that causes a rift within the group. Expect to see more than one walkout from Denise, the mention of a cease-and-desist letter, and even her husband, Aaron Phypers, getting involved in the conflict with the RHOBH cast, especially with Erika.

The end of the RHOBH Season 10 premiere also revealed that Denise "stopped shooting with the group" in December. Kyle Richards and Lisa Rinna said that they doubt they will see Denise at this season's reunion — or even ever again around this friend group.

Denise Richards Is Having a Hard Time Recovering From Surgery
Life is better as an Insider
Bravo Insider is your VIP pass to never-before-seen content, exclusive giveaways, and so much more!
Sign Up for Free
All Posts About
Andy Cohen
Denise Richards
Erika Jayne
Kyle Richards
Lisa Rinna
The Real Housewives of Beverly Hills
Friendship
Aaron Phypers
Related

Denise "Stopped Shooting with the Group" on RHOBH