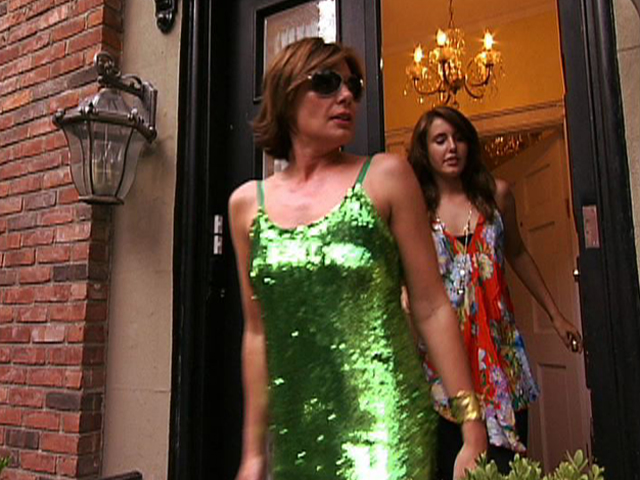 Now that Luann de Lesseps is engaged to be married again, we can only imagine that she's been working hard on putting together her wedding guest list. Though we definitely want to know which Real Housewives of New York City 'Wives will be getting an invite, we've also been wondering if Luann's ex-husband Alexandre de Lesseps will appear at the nuptials as well.

That's mostly because Luann and Alex didn't have the best split back in 2009 when he informed her that he had met someone else and was leaving her via email. However, the two have remained friendly since then, raising their two children, daughter Victoria and son Noel.

Indeed, Luann's ex-husband does plan on attending her upcoming wedding, "insiders" have told the New York Daily News' Confidenti@l. Alex even joked that he wants to walk his ex-wife down the aisle, according to Confidenti@l.

It sounds like Luann might even approve of that idea. "We are family!" she tweeted in response to the article.

Unfortunately, as he gives Luann away, she will be giving up up her countess courtesy title that she inherited upon marrying Alex, who is a count descended from Ferdinand de Lesseps of France. But she seems perfectly fine with that. "I've been carrying around that title for a long time. I have no problem with losing it," she told Us Weekly last month. "So Tom says to me, 'You're going to marry a commoner, how do you feel about that?' I go, 'Honey I will marry a commoner any day.' There's nothing common about Tom, and I found my match, which is so rare. I'm lucky I found it the first time, nevermind a second time."

It sounds like having a count possibly give Luann away isn't the only part of her wedding that's going to be grand. Luann also revealed to Us Weekly that she wants "a big blowout wedding." She and her fiancé, Thomas D'Agostino Jr., are eyeing a Palm Beach, Florida-set wedding for New Year's Eve, she said. Luann's RHONY castmate Dorinda Medley, who introduced the couple, has also scored a spot as one of her bridesmaids.

We can't wait to see what Luann's sure-to-be-classy wedding looks like. Until then, these pics of Luann and her family through the years will definitely make you emotional.

Break Out the Champagne: Luann de Lesseps Is Engaged!