Life always looks so perfect looking from the outside in. Tonight’s episode pulled back a few of those perfectly coiffed curtains. Watching the conversation with Joanna and Romain was a bit uncomfortable. Haven't we all had those intimate conversations at one time or another?  I personally adore both of them, and my fingers are crossed that they make it together as a couple, make beautiful babies, and live happily ever after.

Then we peek behind the curtain of when is enough "skin" enough? Wow! You go, Adriana. It takes a lot of courage to show so much skin, but it seems Frederic enjoyed every minute of it. I had to laugh hearing people call you a "flirt" last week. Haha, tell me something I don't know. I think Frederic gets a kick out of the flirting! Gotta love a guy that thinks everything about his girl is perfect. And the photo, let's not call it nude -- I prefer to think of it as revealing. The "Pandora’s Box" title -- let's leave that to the imagination! LOL! Who wouldn't flirt with a body like that?

As for Karent and Rodolfo, I get it -- mom doesn't love Rodolfo. I also get it that sometimes people have to see things for themselves, and maybe Karent is not ready to shed light behind the curtain in the relationship that she still wants to believe in. And maybe some of us on the outside looking in don't have a clue what is behind that curtain, we just think we do. And really, is it any of our business? It was sad to see Karent smiling through the tears. So for my part, I only wish them both well. But if he turns out to treat her like anything less than a goddess, I hope she gets rid of him.

Everyone has something in life to deal with, no matter how perfect it may appear as we look in. With two young, healthy people, who would ever think that Lisa and Lenny had a care in the world? I think it was very touching and very generous of them to share what's behind their well-maintained curtain. What I took away from that moment is that they both really love each other, and we all know the Power Of Love. My hope for them is that power helps them create lots and lots of babies.Then there is always what lies behind the curtains of friendships. I've always said, "Some people collect things, and I collect people." Well Elaine Lancaster is one of those collectibles. It is unfortunate that people make false accusations with absolutely no evidence to back them up. So for the record -- I can't and don't try to control my friends or use my friends, including the crazies I collect along the way. I love them for who they are and who they are not. I try to back them when they are right and show tough love when I disagree with them. There is one thing that is absolutely positively not true and cannot be said with a straight face about me -- that I need anyone to speak for me or do my "dirty work." If I have something to say, everyone that knows me knows that I am very capable of having straightforward, adult conversations and say what is on my mind. I've never been one to hold back. So if anyone thinks or says otherwise, they don't know me, they just think they know me or prefer not to know me and make false accusations about me.

It didn't go unnoticed that at the art gallery the night before the gossip lunch, Ana says, "Marysol thinks..." but by the time they have their rehearsed lunch the next day, it’s "Ana that thinks..." When making accusations, it's best to keep the stories straight. And when the facts aren't on your side, maybe it's better to keep the mouths shut. And it's never a good thing to throw rocks and hide your hands, it will eventually become transparent.

And regarding Marysol, I did get her two different jobs, I won't comment on whether or not she still has them, but to hear that I never helped her get a job, well, the facts are on my side once again. The irony of two single women taking pot shots at my nearly 20-year marriage speaks volumes. Like they say, "When someone shows you who they are, believe them." I have been nothing but nice to those two, helped them whenever I could, and defended one of them even at the expense of my own credibility many times. You're welcome.Joanna was fab during the gay Winter Party weekend; she rocked the dance and the costume. I remember having the white party (South Florida's HIV-AIDS fundraiser) at my home sixteen years ago. I had dancers too (mermen) in my pool, and they rocked it too! The event brought back fun memories. It is overwhelming to see that the cause has grown so big it covers the beach in all directions. Wow. So proud of Miami and its social progress. The curtain of secrecy and shame has become a beaming light of pride and progress. 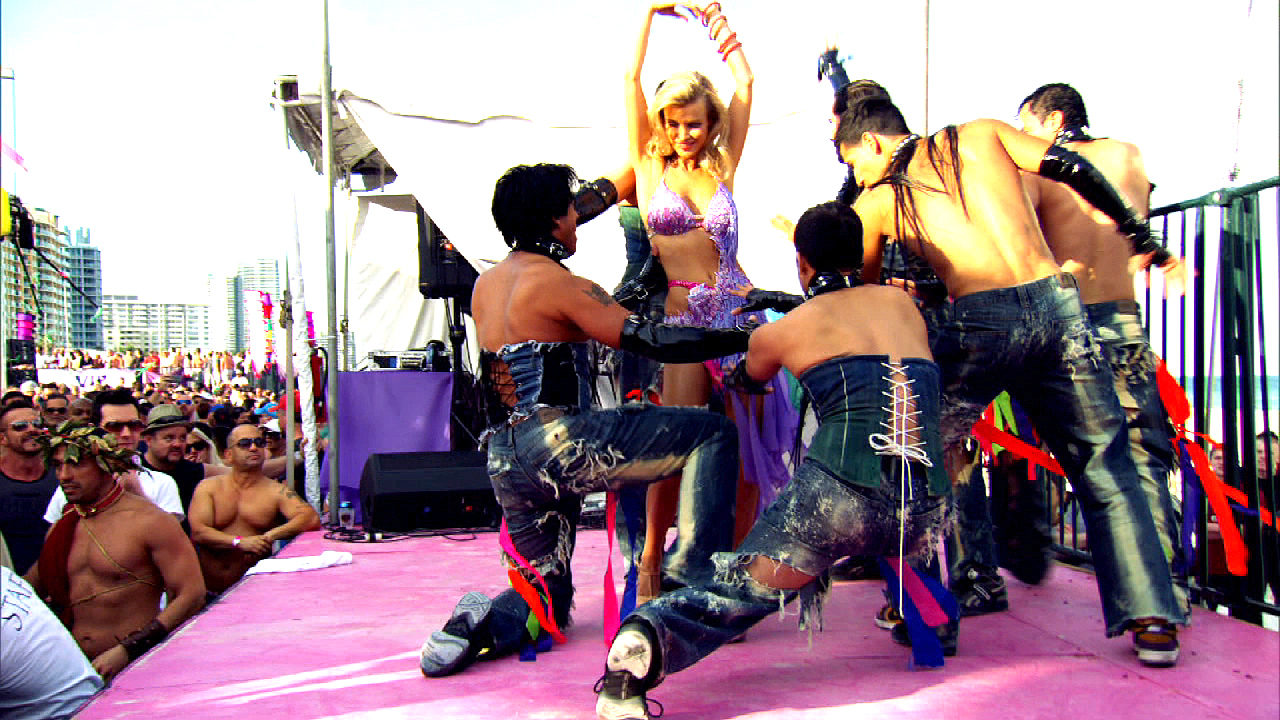 To sum up tonight’s episode -- a few personal observations as I look behind the curtains -- and BTW if the shoe doesn't fit someone specific, don't force their foot into it.

Adriana is a harmless serial flirt.
Frederic is a charmer and loves every minute of it.
Joanna has a temper and a soft heart.
Romain is always the gentleman.
Lisa doesn't know me but will see that I am her friend, if she lets me be.
Lenny will make a wonderful dad.
Karent believes in love and will find it, with or without Rodolfo.
It's obvious Karent cares deeply about her parents.
Some people accuse others of what they're doing.
It's easy to make false accusations about people.
Some work so hard at portraying who they are not, that they don't recognize who they are.
Some people just want to be relevant at anyone’s expense.
Some people choose being two-faced rather than facing up to an honest, genuine conversation.
Some pretend they don't want to be associated with gossip during their uninterrupted gossip-feasts.
Happy marriages are fodder for some -- "If you can't have a happy marriage, besmirch one!"
Elaine Lancaster has never met a camera she didn't like.
Some people are larger than life, and their bright light makes some people very uncomfortable.Then there is me, and I find all these people fascinating to watch. I may decide to add a few of them to my collection, and others, well, maybe not so much

Spread the love and keep the peace, and don't deal with stupid.

Stay tuned, bitch slapping will seem like child’s play by the time this season wraps.
Preview
Joanna Keeps an Eye on Adriana 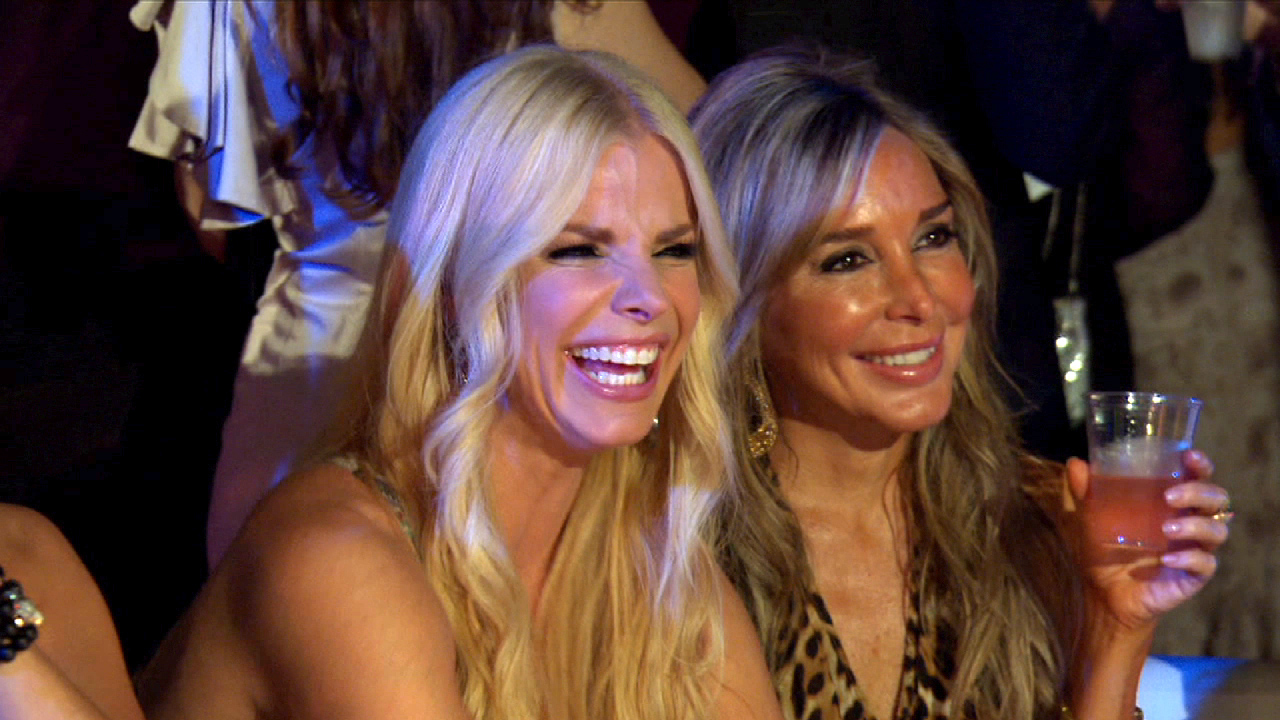 By the way, many of you asked about the handbag I wore at the premiere, it’s my personal design at www.leablackhandbags.com. And if you watched Watch What Happens Live, callers mentioned my face looked “refreshed.” For all my beauty secrets, go to www.suddenyouth.com. Enjoy!