Dorinda: Sonja Is a Trip

OMG, I’m on again! Is this really going to happen every week?! Funny how I’m still freaked out by myself on TV…

As you may or may not know, I am not a Hamptons girl; I am #TeamBerkshires. But hey, this could be fun too, right? As close as Ramona and I are, I have never actually stayed or even seen her home on the beach, so I was excited to go. Meeting Lady Morgan was a nice little adventure, too. She’s so beautiful. And I can totally see why Ramona gets flustered with her and her tendency to monopolize a conversation. But Sonja is a trip. I really like her. 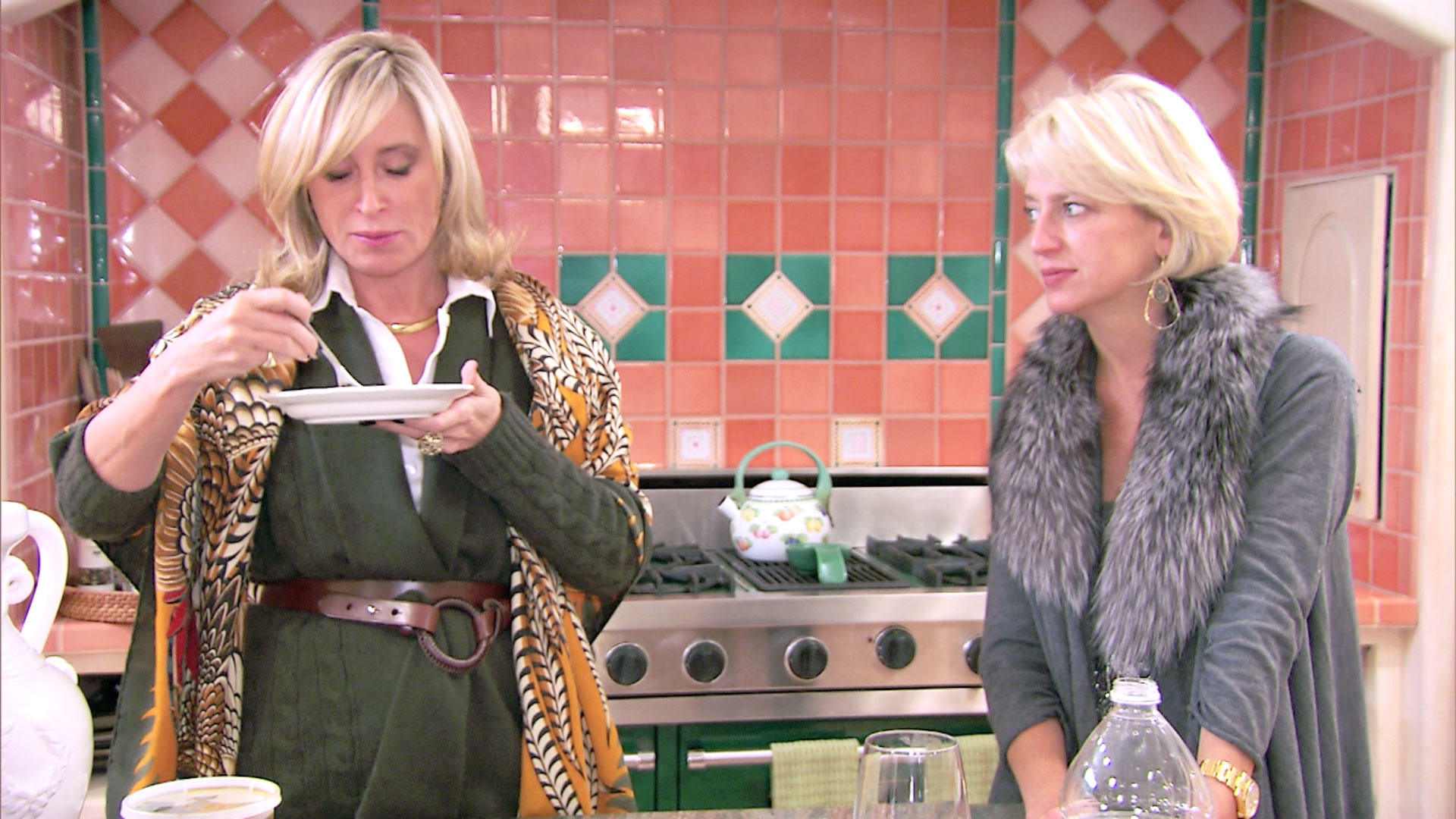 Luann’s estate sale was something, huh? In the Berkshires, we call it a tag sale. Not as fancy, but much more real. After 22 years, it’s got to be hard to see the home where you raised your kids and built a family be taken apart and sold to strangers. But it was time for Luann to move on and write the next fabulous chapter of her life, as well as unburden herself of the past. (I need to start thinking about doing some of that in my life in Great Barrington. As my Mom would say, “Only when you’re good and ready, and not before that.”) I was excited to see Luann’s new house and watch her new beginnings flourish. I’m so proud of her.

So this was the weekend to reconnect with the girls I knew and meet the "new girls” I hadn’t met. Meeting Kristen and Carole was a breeze. They strolled into the estate sale with Heather and were as kind and as a welcoming as I expected them to be. Very, very sweet. I have to admit, I was a little nervous to meet the whole gang (operative word: gang), but I figured my closet helps me keep up with the best of them, and for this weekend, it was all “Hamptons Country Chic.”

At the cocktail party that night, I finally met Bethenny…at last! I was excited and a bit nervous, since she has quite the reputation. And all the good things I’ve heard…they were right! All the girls seemed happy to see her, but there was some sort of weird tension with Ramona that I didn’t really understand. It was almost like a Mexican standoff —a designer standoff, but a stand off. I was surprised to see Ramona “KellyBensimoning” Bethenny. It was weird and pretty tense, to be honest. It appeared to be about some brunch plans on a Sunday, but beneath the surface, it felt more like a timeless power struggle. Not comfortable with all that, and I’d hoped the next day would go smoother after it was all sorted out.

Preview
Battle of the Alpha Dogs 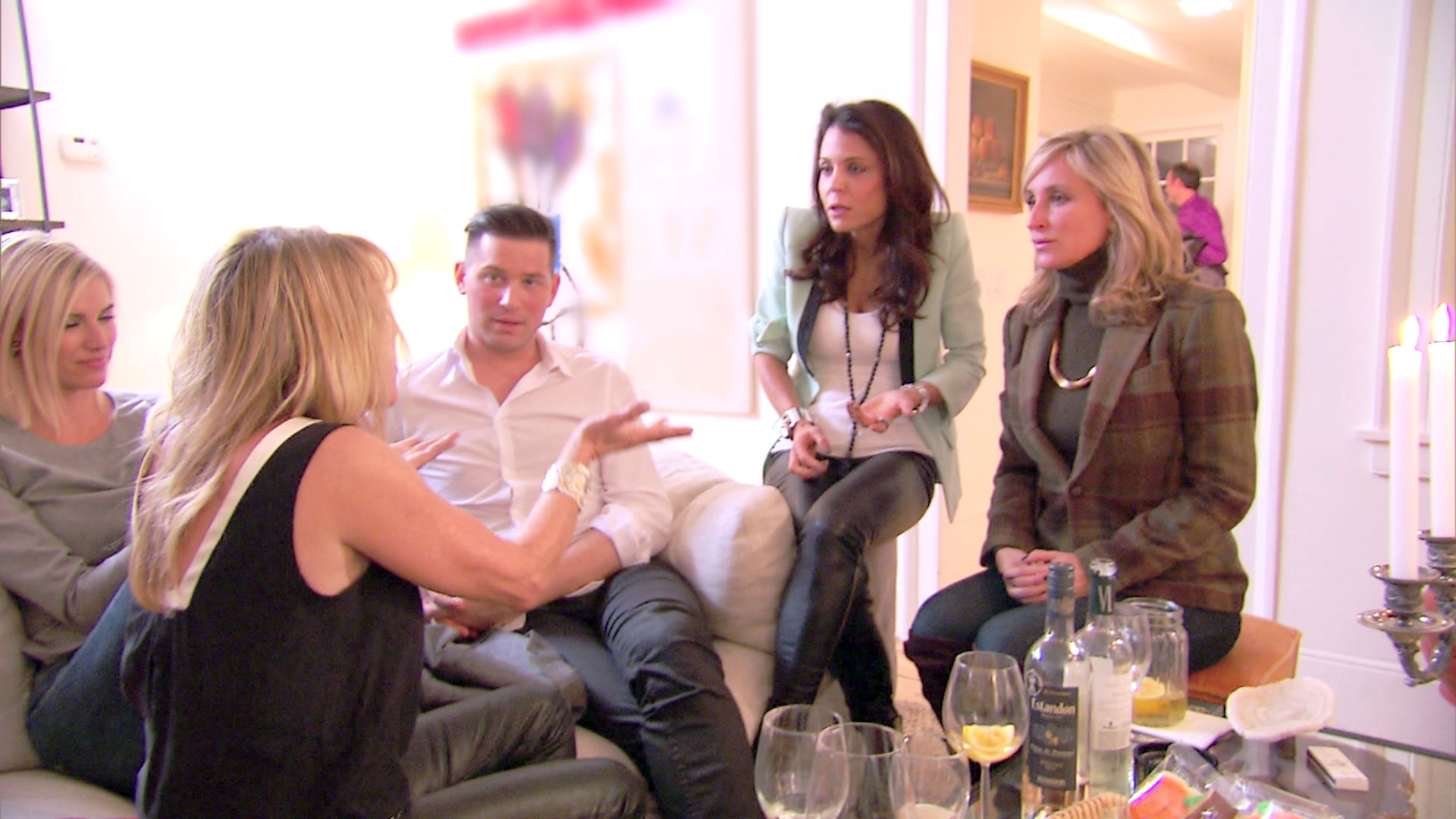 Honestly, I don't care where I go to brunch, as long as there’s food and good company. After that night, I was mostly concerned with getting through the weekend and making friends and/or figuring out who I had to keep my eye on. Ideally, I wanted to have a fun girls' weekend, not have to be the "hostess with the mostest" for once, and just get to relax...NOT!

For me, that weekend was mainly about supporting Ramona and really letting her know that I was there—that we were all there—for her, and that I understand what she is going through. After a long, happy marriage, divorce is a real bitch. Part of you dies. It’s that serious. Especially after 25 years…that’s a quarter-century! As much as I am so sad Richard is no longer here, I know it’s over, it’s ended, it’s done. I have to go on without him. In a weird way, this allows me a freedom to cope with what’s in front of me and continue with a new life. With divorce, you don’t have that “luxury.” (Weird way of putting it, but there’s a peace that comes with a solidified, unchangeable event that has no tomorrow.) Divorce, of course, keeps two people going, rebuilding their lives, and you know all about it. Whether through friends or social media—or even tabloids, in some cases. You know about their next act. It can be really difficult. After a divorce, you have to untangle your life emotionally and financially with expensive lawyers and sometimes in the public eye, though in front of family and close friends can sometimes be more draining than a tabloid can be.

In the end, if there ever really is an end to a divorce, you end up splitting your life up in half… (but it’s really “half of the half,” because the lawyers took most of it), only to run into the bastard in the grocery store with a new woman two weeks later. That’s a pretty crappy situation. You know what they say, "Sometimes good things fall apart, so better things can fall together." All true, but boy…the process sure is daunting!