Hello my stripper loving (or not) friends. Will your eyes (or Tamra's ears) ever be the same after the ladies' trip to Puerta Vallerta? Probably not, and I think that's for the best. Let's recap this life changing trip in full, penis-filled detail.

Pee Party
We pick up with Vicki, Lydia, and Tamra holding hands in the streets and frolicking -- sans Gretchen and Heather. The ladies back in the limo are pissed, not just because Vicki's going to blow her wad in one night (never the best imagery), but because Gretchen has a pocketful of secrets about Miss Gunvalson that she is just itching to use in retaliation. But, Heather's not interested in hearing it, or of sticking around waiting for the gals. . . And so when the flashing ears crew makes it home, the two left behinders aren't exactly thrilled to see them. The more the lights blink, the angrier Gretchen gets. 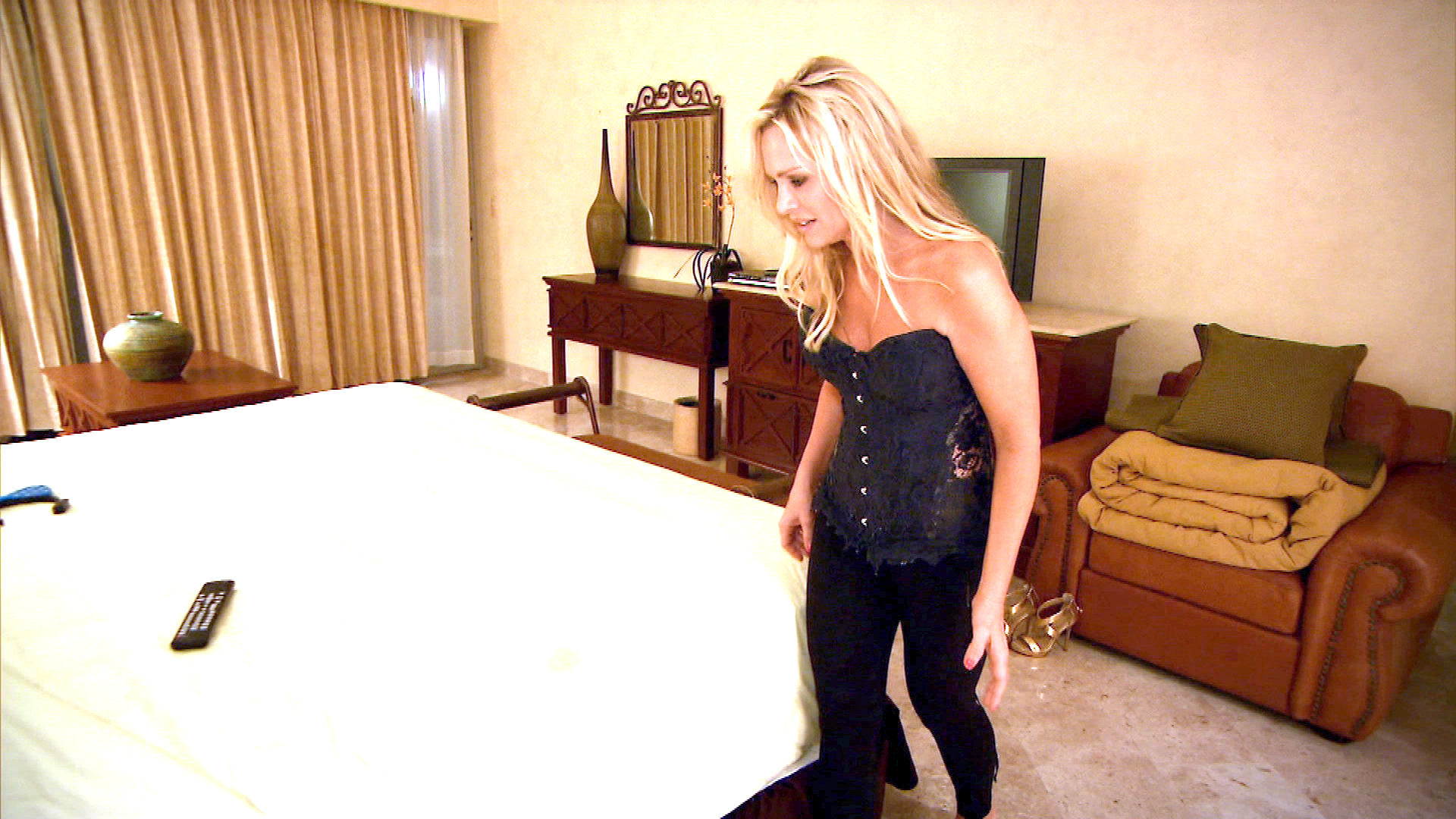 Yes, this is a thing that happened. Will that hotel bed ever be the same? Will I ever be the same knowing that Vicki leaks on occassion? Definitely not. And really, do you leak? I haven't, but maybe I'm just not having as much fun as these gals.

Culture Club
The next morning, Gretchen tries to push through those tough times from last night and focus on something besides drinking and penis straws (while still using penis straws, of course). The tour guide instructs them to look at this magnificent seahorse sculpture, but seahorse sculptures remind Lydia of drinking (don't they remind everyone of drinking?), and so the topic of last night comes up. Props to the poor tour guide who managed to stay calm throughout this awkward time. And so the gals muddle through Navarro's performance until Lydia again brings up the great evening they had previously -- and once again that does not go over well.

I'm not excusing Lydia continually bringing up the drunken evening in the slightest, but is it possible she maybe just had a bit of the hangover brain? It's hard to not just say your first thought when you've been riding the drunkness bull the night prior. However, that slow reaction time is no excuses to Gretchen and Heather, leading to a limo full of tears and Gretchen calling Vicki a hypocrite.

Pool Party
After all that cultural learning and making tour guides uncomfortable, the ladies head down for some Gretchen approved pool and margarita time (and some Heather approved chips). Surely a little sun and some goody bags can help smooth things over. . .even if they are filled with Gretchen Christine products, Vicki.

But once again, old feuds die hard. When Tamra and Gretchen head out for a stroll, Vicki can't help but wonder if they will be sporting their BFF jewelry. And that leads to even more fun for the rest of the gals and the staff at the pool. . . 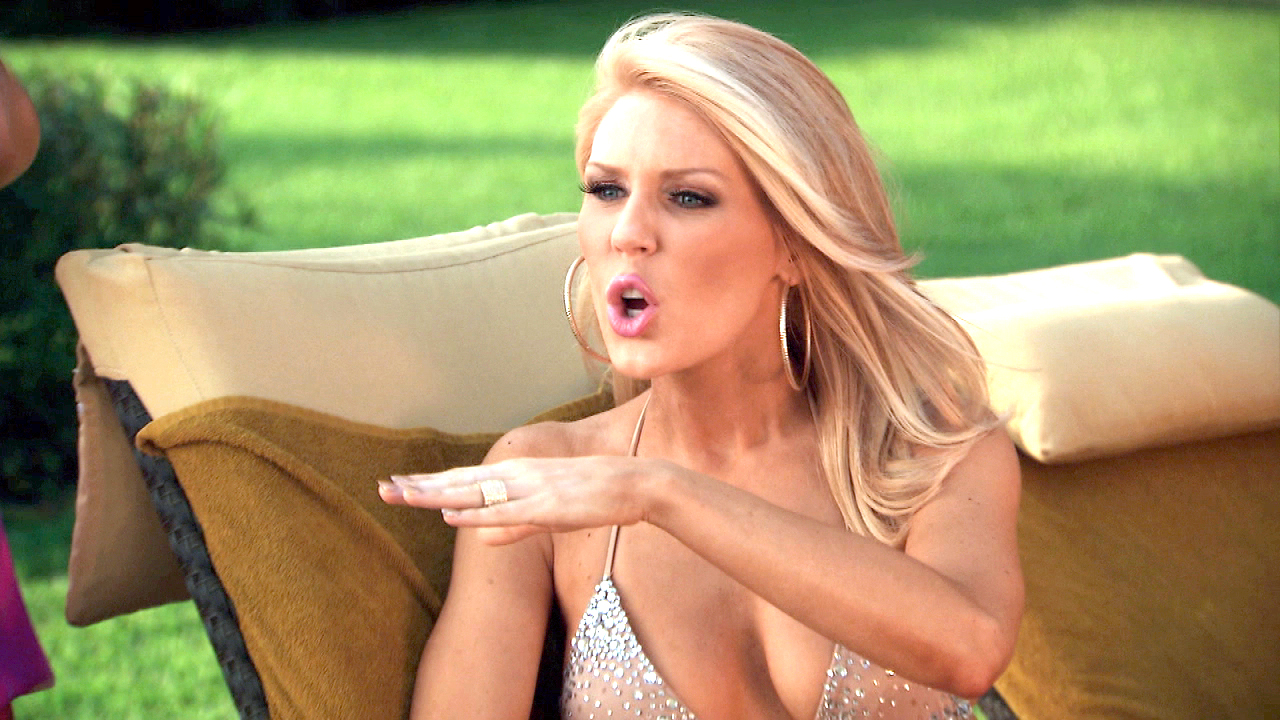 Vicki does not want to be Gretchen. Gretchen does not want to be tormented. And so when Tamra and Gretchen do finally take that stroll, all of Vicki's rumored indiscretions and her supposed evening agenda come up. Is Vicki intentionally competing for Tamra's affections? That's something to ask Vicki. Instead Gretchen asks Tamra why she's so quick to push people away, which brings up the deep past she's been hiding -- even from Vicki. I wonder if these three should have some sort of forced getaway to try to create the perfect trifecta of friendship we know could exist. Imagine how naked wasted and emotionally bonded they could all get then.

Baby or Jim on Board?
Meanwhile, back in the O.C., Alexis is out with Jim and thankful she won't be subjected to the junk-centric time that will be Tamra's bachelorette party. She's busy hanging out with her husband and convincing him their house is too small for their four children. Four? Yes, you and Jim noticed that her counting is a bit off. But it's not off, it's just predictive. You see Alexis is ready for another addition to the Bellino gang, even if Jim isn't. She will out run you Jim. She will outrun you to the baby making bed and leave you hanging with the doggie bag.

Every Party Has a Penis, That's Why We Invited Gretchen
How many penis-related items did you think a room could hold? One? Two? Twenty-seven? Multiple the number you thought of by ten, because Gretchen Rossi has ferreted out every possible item that could be made penis shaped and procured it for Tamra's party. Seriously. I'm surprised the suite's furniture hadn't been replaced with inflatable penis chairs for the ladies to sit on. And so when things start with light up pecker earrings, it sets the tone for the party.

Most shocking gift though goes to Heather's. God bless her for constantly keeping us guessing. A blinged out whip? Does she use that to keep Terry in line? 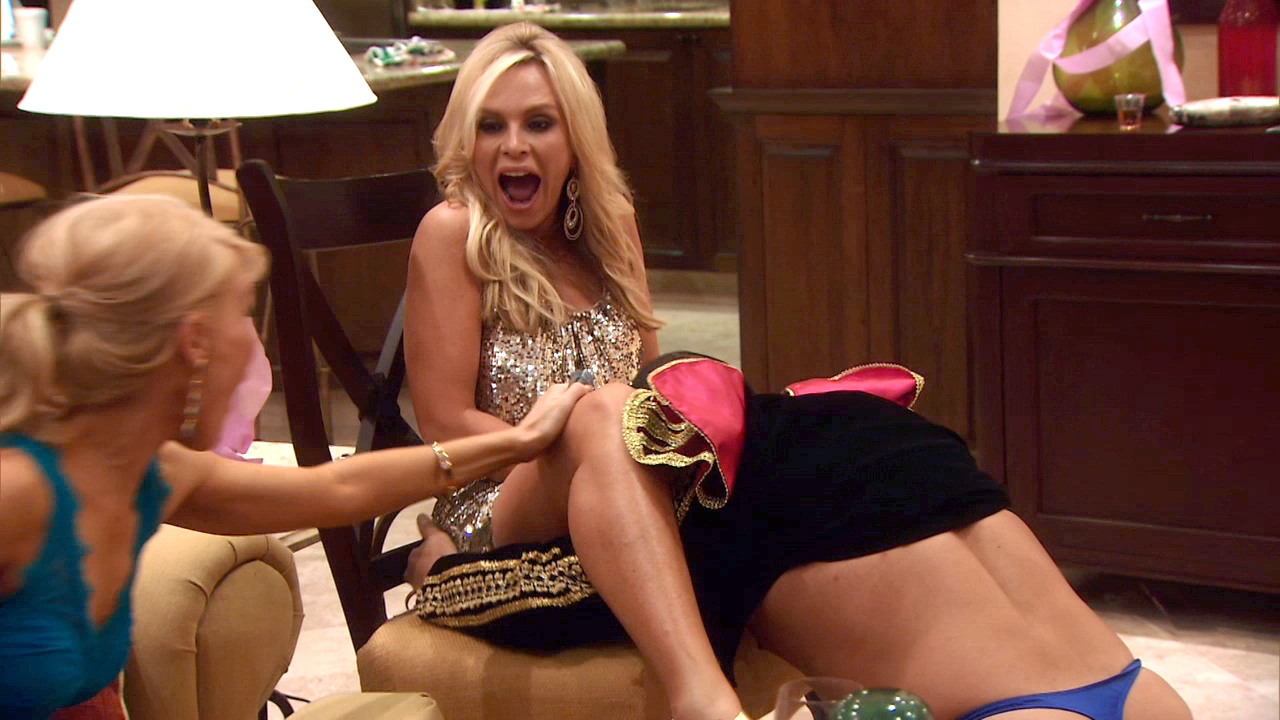 I have to agree with Vicki that maybe these strippers could have been a little hotter. Also, they could have been a little less aggressive. Is ear humping a thing now? Is that a sexual trend that the kids are into nowadays? Can your ears get pregnant because Tamra's ear drums are most definitely with child. Also, how is it possible no one could get it together to pee on that stick. We know by now that they have loose bladders.

Next week, Alexis and Heather try to make amends -- and a surprise guest arrives to shower Vicki with gifts. But are his flowers covering up his misdeeds? More importantly, how will Eddie feel now that Tamra's ears are pregnant!?! Leave your thoughts on the Mexico hijinks in the comments!