Sign Up for Free to View
Will Gretchen Rossi & Slade Smiley Ever Get Married? 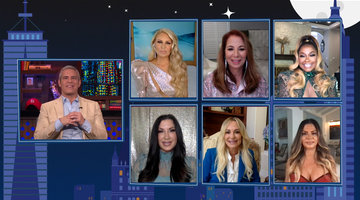 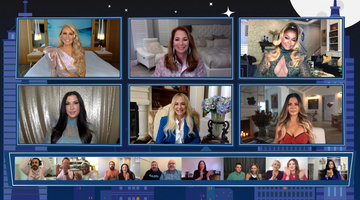 0:44
Show Highlight
Which Real Housewives Alumni Would Make a Return?

Since her days on The Real Housewives of Orange County, Gretchen Rossi has become quite the social media (and selfie) queen. Gretchen is constantly keeping us up to date on her life via glamorous snaps, and apparently, people have strong opinions on her photo editing style.

On May 6, Gretchen appeared on a special episode of Watch What Happens Live with Andy Cohen featuring Real Housewives alums. After playing a couple of rounds of games with the guests, Andy told Gretchen that her social media posts were a hot topic.

"Gretchen, we got a lot of questions from people thinking that you over filter your pictures on Instagram. And I mean, I'm looking at you now with no filters — you don't need a filter, man, look at you." (Gretchen looked absolutely stunning in a sparkly pink one-shoulder dress, which she paired with glowing makeup and soft wavy hair. Watch the video above to see her glam ensemble.)

Gretchen responded: "Well, thank you. But you know what, everybody uses filters, so I think it's hilarious that I'm the only one that they call out for that because every person under the sun uses a filter. Tell me one person that doesn't. I mean, c'mon."

See more from Gretchen's WWHL appearance in the clip above.

Life is better as an Insider
Bravo Insider is your VIP pass to never-before-seen content, exclusive giveaways, and so much more!
Sign Up for Free
All Posts About
Beauty
Gretchen Rossi
Related